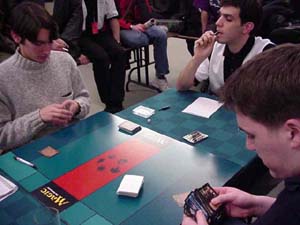 Kai Budde vs. Florent JeudonFlorent Jeudon is the lesser-known member of the French Black Ops team behind the Ruel brothers. This is his chance to follow in their footsteps and claim an individual title for himself. What else can be said about multiple Pro Tour and Grand Prix champion Kai Budde as he guns for his sixth Grand Prix title.

Both had drafted strong black-green decks and the final promised to be brutal.

Budde went first and started beats with a Basking Rootwalla and then a forest-walking Leaf Dancer. Florent Jeudon hit straight back by enchanting a Seton's Scout with Seton's Desire. The Scout became doubly blessed by Seton as Jeudon looked to escalate damage in the race.

The Frenchman had stuck on three land and a Mesmeric Fiend from Budde revealed a hand full of good spells he couldn't cast – Chainer, Painbringer, Leaf Dancer and Elephant Ambush. Budde took the Painbringer and attacked with the Rootwalla and Dancer to leave Jeudon at six.

The super Scout came in to smash Budde to four. Jeudon had found a second forest and now had Ambush mana so that Budde couldn't kill him with an all out strike. The Ambush had to be cast in response to Budde's Last Rites and Budde chose to strip out a Shadowblood Egg and Leaf Dancer to leave Jeudon with just Chainer. This might have seemed odd but the reasoning soon became clear. Just the Leaf Dancer attacked to tie the scores.

Jeudon ran in, thinking Budde would have to chump with the Rootwalla to stay alive. It turned out to be far worse as Budde prevented all damage with a Moment's Peace. With Budde able to flash it back to do exactly the same next turn Jeudon now had no chance of winning the race.

The game had been a close race with Budde just tripping up Jeudon at the end with Moment's Peace.

If the first game had been a close race then game 2 was a one-sided massacre.

In what might have seemed like pure insanity Jeudon chose to make Budde go first. His reasoning was Budde had a better deck and he thought his best chance was to try and force the "screw".

He paid for it dearly as Budde exploded out of the blocks with Diligent Farmhand, Wild Mongrel and then a Mesmeric Fiend nicked a Cabal Torturer out of Jeudon's hand.

The Frenchman tried to fight back by summoning a Leaf Dancer but he was severely behind on the clock and a Nantuko Disciple from Budde put him further behind.

Jeudon had drawn too many lands and tried to thin more out of his deck with Rites of Spring. He attacked with the Leaf Dancer.

Budde's draw had been simply godlike as next turn he played Last Rites.

"Take both your spells," Budde said, putting Chainer and a Gravedigger into the bin.

Jeudon was left with only land in his hand and a Leaf Dancer against Budde's Farmhand, Mongrel, Fiend and Disciple. This would not be a race as Budde smashed him for six and left the Frenchman at eight life.

Jeudon drew something really exciting – another land. He attacked with the Leaf Dancer because it didn't have anything better to do.

Budde had much better skills. A Sylvan Might was waiting on top of his deck to put the hapless Jeudon out of his misery right there and then.

Another top 8 steamrollered into oblivion by the German Juggernaut.