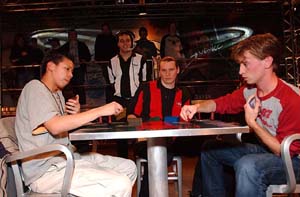 Gunning for Psychatog has served these two players well. Franck Canu and Ken Ho smashed through the first three rounds with ease before destroying Antoine Ruel and Neil Reeves. Now they must face each other, and Canu has the edge. Best of three, for all the marbles.

Both players kept their opening hands. Ho started with a Careful Study, but it merely put Roar of the Wurm and Careful Study in his graveyard. He didn't even draw a two-drop. Canu meanwhile got in with Llanowar Elves and Wild Mongrel. Ho passed his third turn with just three lands on the table.

Canu Duressed, seeing a pair of Logics, Roar of the Wurm and Arrogant Wurm. Naturally he took the Logic. However, he had no third land. He just attacked for three and ended his turn. Ho laid his fourth land and flashed back his Roar. Canu Smothered it, summoned a second Mongrel, and hit for two.

Now Ho needed just a bit of luck. If his Merfolk Looter survived, or if he drew a fifth land he'd be able to start powering out the big creatures. Canu made things tricky with a second Smother. His troops brought Ho to nine. He added a second Elf. 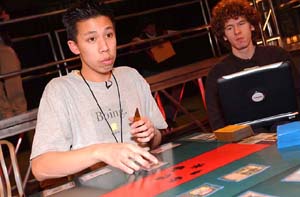 Ho drew Roar of the Wurm.

Shaking his head, he handed it back. Canu swung in, and pitched his whole hand for the kill.

Cheering Canu on from the sidelines were four of France's Pro Tour best: Raphael Levy, Christophe Haim, and the brothers Ruel. Ho pulled his hand up slowly. The first six were blue cards, Wild Mongrel and forest. He waited on his seventh card, but then gave in. It was a second forest. He couldn't bring himself to send it back. Canu's hand brought him much less concern. 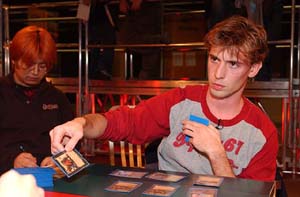 Canu led with Llanowar Elf, then played a Squirrel Nest on his forest after Ho dropped his Mongrel. Ho drew a second Mongrel and third forest, so he still had a lot of game. Canu showed him exactly what game looked like by tapping out on his next turn for Opposition.

Canu's hand held only lands, but it hardly mattered. He started generating Icy Manipulators while Ho struggled to find an island. After three turns he did, and made a Merfolk Looter. Canu was ready with Smother, and Ho was only willing to endure three turns of lockdown before he gave up entirely.