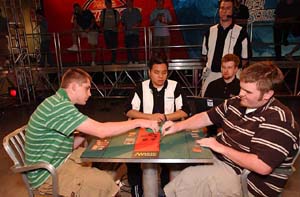 The consensus prediction by matchups had Walls and Wagener in the finals, so no one is terribly surprised to see the only two players in the Top 8 without Pro Tour success meeting here. This will be the third red-green deck Walls has faced today, which is a very good matchup for his Slide deck. Wagener went through two mono-black decks to get here, but a deck with Astral Slide, Wrath of God and plenty of efficient life gain will be very difficult to conquer.

Wagener played a Basking Rootwalla and attacked for three, then summoned Llanowar Elves. On the following turn, Reckless Charge made one bigger and Wagener did not pump before damage in order to avoid getting wrecked by a cycled Slice and Dice. Walls cycled away four lands and a Lay Waste, before playing Teroh's Faithful on turn four. Reckless Charge was flashed back on the Rootwalla, and the Faithful chump blocked it. Walls used a sac-land and went down to eleven, and kept cycling through cards, staying back on three untapped mana to threaten Slice and Dice and take a hit for two instead of four from the Rootwalla and Elf. 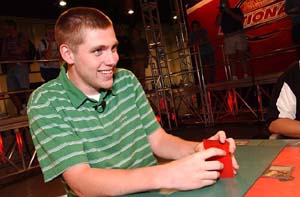 Walls didn't actually have Slice and Dice, but was doing a very good job of bluffing it. A Tusker was cycled on end step, and Walls tapped six for Exalted Angel. Wagener sent Violent Eruption to the face on end step, then used another on his turn to finish Walls and take the first game.

Wagener mulliganed down to six, and once again had a first turn Rootwalla. It attacked for three, and Walls missed his third land drop, stuck at two forests. Another attack for three was followed by a Firebolt, and Walls drew Secluded Steppe and played it. Just as in previous matches, Walls was trying his best to get under his opponent's skin and entertain the crowd, saying "So lucky!", "No Sir!" and "You're a sack!" many times.

Moment's Peace slowed things down a bit, and Wagener played Wild Mongrel and a second Rootwalla. Walls tapped out for Astral Slide and took a hit going down to three, then played Renewed Faith to survive at five. Wagener improved his side with Phantom Centaur and Walls had Wrath of God, but couldn't find a second white source to cast it. By this point it wouldn't have mattered anyway, as Wagener had the burn necessary to put him one game away from the National Championship.

Yet again, Wagener mulliganed his opening hand. He played a turn two Mongrel, and Walls put Astral Slide into play. The Mongrel attacked for two and Wagener played Static Orb, getting a big "Ooooh!" out of the crowd. 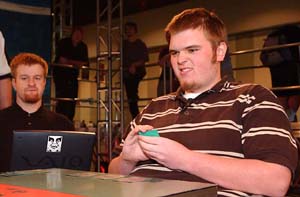 Walls did have Disenchant waiting, so the potentially devastating Orb was taken care of. He untapped and put a face down Exalted Angel into play, then cycled to put it under the Slide on end step. The Mongrel spit out a Rootwalla, and Wagener attacked.

The attack brought Walls to ten, and the Angel came into play and attacked for four. Violent Eruption on end step brought him back to ten and the Mongrel and Rootwalla attacked, bringing him down to four. Walls untapped and attacked, but Wagener had the other Eruption to take the match in a sweep. Wagener had a look of disbelief and relief on his face, as he not only had become the National Champion, but also swept what was perceived to be a terrible matchup 3-0 to do it.