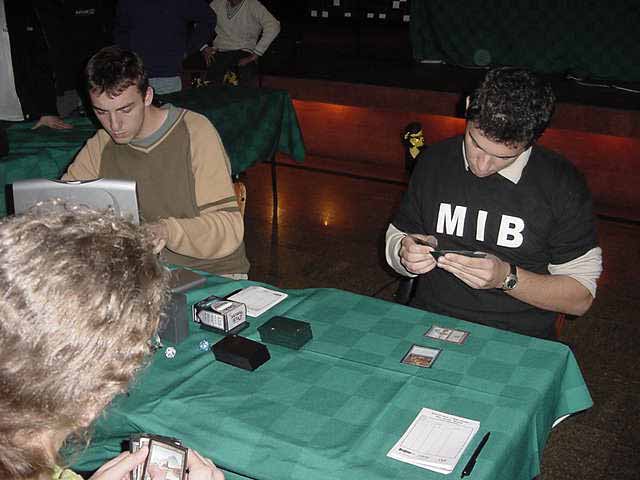 Olivier Ruel covering the finals.The final of GP Sao Paulo is a Brazil-Argentina face to face. Gabriel Caligaris, from Argentina will be playing in Worlds this year thanks to his 3rd place finish in his National.

Felipe Desiderati is pretty confident in this U/G-Psychatog match up: "I've already beat three Argentineans playing the same deck. I hope he'll be the fourth".

Playing first, the Brazilian choose to keep an opening hand with two Careful Study but no creatures. The first Study offered him two Roars to discard. On turn two he had the pretty good idea of drawing Wild Mongrel, but it died next turn from Caligaris' Edict.

While the Argentinean played Psychatog and tapped out, Felipe decided not to play one of his two Roars but instead search for three analysis with Quiet Speculation. Neither of the two Careful Study that he played on turn three or his first analysis gave him another creature. 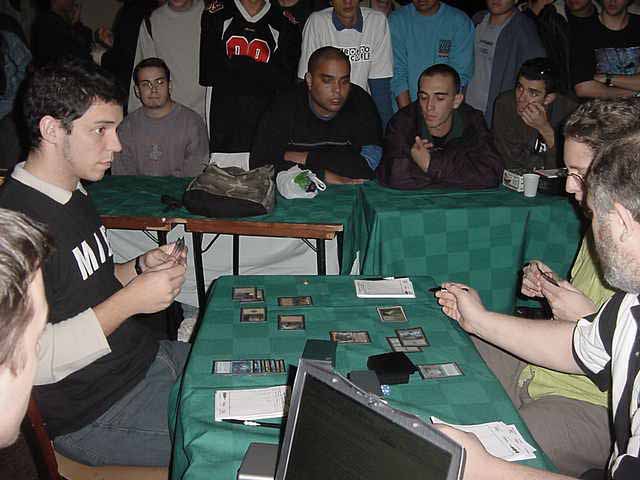 Desiderati and Caligaris playing in the finals.He managed to Memory Lapse a Fact or Fiction, on the same turn that he played his first Roar. Again Chainer's Edict took it away. This game would look really good for Gabriel, if only he managed to draw a fifth land.

Instead, Felipe played his Analysis one after the other and starts getting a really good hand. A first Mongrel is countered, quickly joined in the graveyard by a second Hound.

All because Caligaris', despite only having four lands, but he has three Chainer's Edict too! Now he had a great advantage. In fact, his opponent was down to ten life, and ten life facing Psychatog isn't a lot. At this point, Desiderati's only way to survive would be to sacrifice a creature to the deity Psychatog every turn.

A Temporal Spring offered him one more turn to live, but the Psychatog didn't return alone on the turn: a few seconds later two Atogs finished the job. 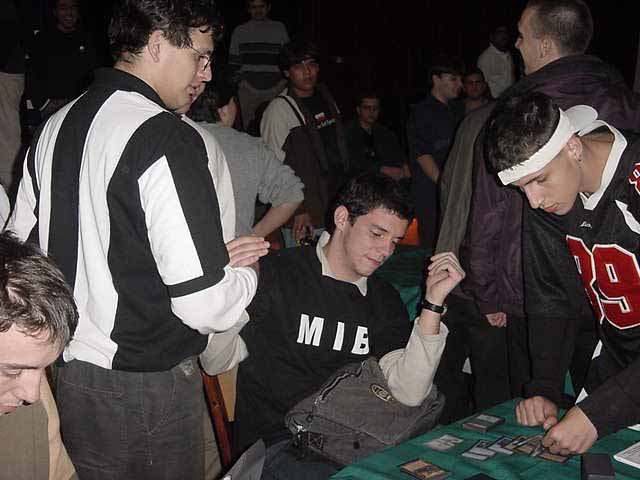 The Brazilian crowd giving Desiderati a pat in the back.The two players suddenly seemed more nervous as the second game started. This could be the end of the Grand Prix and the numerous and silent spectators added to the tension of this important game.

The Brazilian start was better this time. Careful Study doesn't give him any madness or Threshold card, but he plays Werebear on turn two, quickly followed by a Mongrel (Counterspell) and a Quiet Speculation (Two Analysis, Roar of the Wurm).

Despite Gabriel played a turn three Psychatog, the Werebear attacked for four, and Felipe finished his turn with Sylvan Safekeeper and a flashbacked Analysis (14-15). He decided to go for card advantage, swinging once more with the Werebear, forcing Gabriel to discard Upheaval and Island to kill the fluffy bear.

A Careful Study eventually gave Felipe a Wonder, which allow him to attack for one. But once more, painlands (which never deserved their name better) and analysis dealt him two many damage and Gabriel is leading the race. 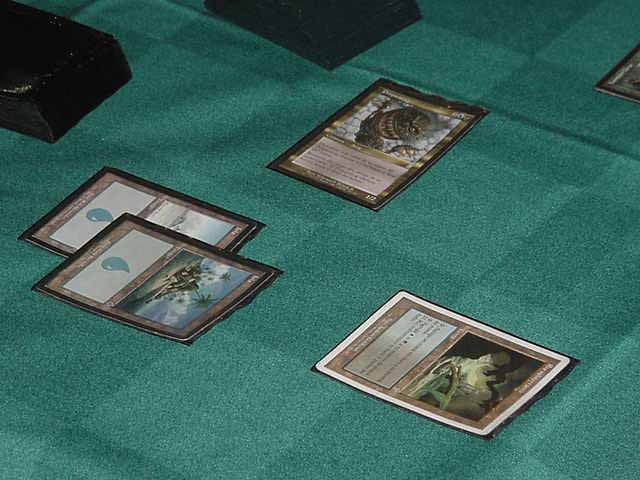 The creature that rules the tournament.Felipe tried to throw some blockers to Psychatog's jaws, but counters and Edict get them out of the Atog's way. Gabriel checked one last time to make sure everything was perfect. No blockers on the way, opponent tapped out, and enough cards with this Fact or Fiction to pump the Atog.

Time had come for the Argentinean to offer the crowd his biggest smile, swing for the win and to win his first major event. Felipe Desiderati was deeply saddened, as a part of the crowd applauded the winner.

For the second time in five Brazilian Grand Prixs a foreigner took the trophy.