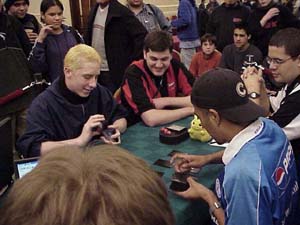 In the Finals of this Grand Prix, two Latin Americans met each other: Matias Gabrenja, a member of Team Tangle from Argentina, who has never been to a Pro Tour and is an Amateur, against Gerardo Godinez, a well-known Pro Tour Player from Mexico, who has also been to the Magic Invitational. Gerardo is playing his trusty Black/Blue/Red Mexican Lobotomy deck, while Matias is playing a Blue/Green/Red Aggressive deck. No matter how this match ends, Matias will be taking home the top prize this weekend, as he has already won the top Amateur prize, and he will come in at least Second Place.

Matias won the die roll, and chose to play first. Neither player had to mulligan, and Matias lead with a Forest, and Godinez with a Salt Marsh. Matias played a Kavu Titan on Turn 2, but Godinez played a Terminate on his Turn 2 so that Matias would not be able to Repulse it. Matias played a Mongoose on his 3rd Turn, while Godinez cast a Recoil on Matias' Forest on his Turn 3. Mattias did nothing on his turn, instead casting an Ice on Gerardo's Salt Marsh during his upkeep; Gerardo responded, however, by Recoiling Matias' Forest yet again, playing an Urborg Volcano and ending his turn. Matias continued to swing with his Mongoose, but had no other pressure to apply to Godinez. 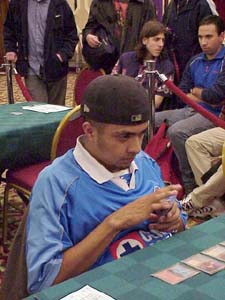 Matias cast Prophetic Bolt on Godinez during his main phase, and Gerardo had nothing he could do, taking 4 and going down to 7. Seeking an answer to the Blurred Mongoose, Gerardo drew a Void and had a choice between casting a Nightscape Familiar or a Void for 2, and he decided to go with the Familiar, after which he cast a Void for 4, and Matias revealed 2 Repulses, an Exclude, a Fire/Ice, and a Shivan Oasis; this was very bad for Godinez as he had just lost his only 2 ways to deal with the Mongoose, the Familiar, which was Repulsed, and the Void. Matias attacked Godinez for 2 and Fired him for 2, bringing Godinez to 3, and on the following turn Godinez cast a Nightscape Familiar and a Pyre Zombie. However, all of that effort was meaningless anyways, as Matias drew an Urza's Rage off of the top.

For Game 2, Godinez sided in his 3 Addles, 2 Fire/Ices, and 4 Ravenous Rats in favor of 2 Repulses, a Lobotomy, an Urza's Rage, a Recoil, a Prophetic Bolt, an Undermine, and 2 Terminates, while Matias sided in 4 Gainsays and an Obliterate in favor of 3 Excludes and 2 Repulses.

Godinez chose to play first the 2nd Game, and Matias decided to take a mulligan. He didn't seem very happy with his new 6 cards, but kept them anyways, peeling a Shivan Oasis off the top and cheering. Godinez played a Nightscape Familiar on his 2nd turn, while Matias got rid of the dirty Zombie while he could with a Fire/Ice. On Godinez's 3rd Turn, he cast an Addle naming Blue, and Matias revealed a Blurred Mongoose, Kavu Titan, and 2 lands. The next turn, Matias let the 'Goose loose, while Godinez played his 4th land and passed the turn. Matias opted not to cast the Kavu Titan, and only played a land and attacked with the Mongoose. On Godinez's next turn, he cast an Addle naming Green, and Matias revealed a Forest and 2 Kavu Titans. Godinez took one of the Titans, then played a Ravenous Rats forcing Matias to discard the Forest.

On Matias' next turn, he drew the 5th land and played the Kavu Titan with kicker, and all Godinez could do was pass the turn, as he was 1 land short of casting the Void in his hand. Matias attacked with Titan and Mongoose, and showed off his top decking skills by casting an Urza's Rage on the Ravenous Rats before Godinez had a chance to block. Godinez, still stalled on 4 lands, drew only a Nightscape Familiar, but decided that that would have to be good enough and cast it and passed the turn. Matias attacked with his Kavu Titan, and Godinez blocked with his Nightscape Familiar and regenerated. 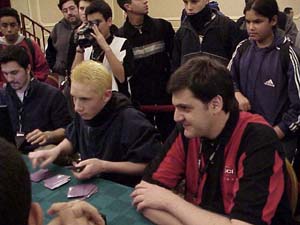 Finally, Godinez drew his 5th Land, but he already had the Familiar that had played the turn before, so he really didn't need it as badly as he had the previous turns before. He cast a Void for 2, destroying both his Familiar and Matias' Goose and Titan. At this point, Godinez had officially "stabilized", with a Rat getting Matias' last land, and his having 3 cards in hand.

Or so Gerardo thought. The next turn, Matias continued to show his affinity for peeling off of his library by casting a Prophetic Bolt in response to a Ravenous Rats, taking a Forest, and then discarding the Forest, the only card in his hand, to the Ravenous Rats. Then Matias untapped and drew, and the crowd shouted in celebration: Matias peeled a Prophetic Bolt from the top of his library to reduce Godinez from 2 to -2, and, thus, Matias Gabrenja wins Grand Prix: Santiago 2-0 in the Finals against Gerardo Godinez!