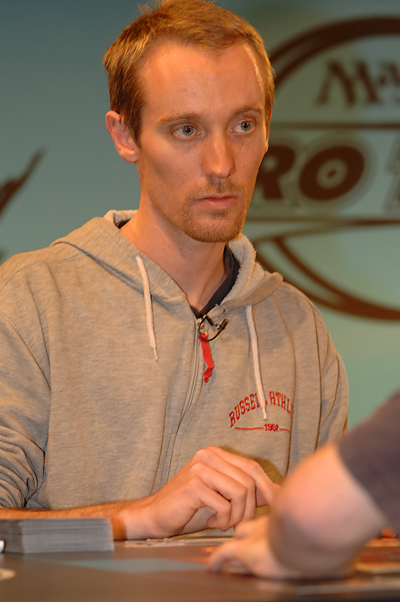 Jan Reuss represents Germany—and Merfolk—in the Finals.After making his first Pro Tour Top 8, Charles Gindy “celebrated” with an early evening of Panda Express takeout and testing with friends at his hotel. The fortune cookie from the evening had been a fortuitous one reading, “You will make a name for yourself.” Whether the American could accomplish that in the face of stiff competition from German Jan Ruess remained to be seen, but Gindy was no doubt happy to have gotten past a tough Semifinals matchup against Yong Han Choo’s Reveillark deck.

The quiet and reserved Ruess didn’t want to make things easy on his American opponent, quickly coming out of the gates with a Sygg, River Guide and a Lord of Atlantis. Charles managed to kill the Sygg with a Terror and developed his board via a Boreal Druid, Civic Wayfinder, and Garruk Wildspeaker. A Profane Command for three allowed Gindy to finish off Ruess’s Lord of Atlantis and return Civic Wayfinder to play. The 2/2 had chump-blocked a Mutavault one turn prior to protect Garruk and netted Gindy an extra land upon re-entering play.

Ruess continued making 2/2s with a Merror Reejerey that could pump Mutavault should Jan decide to activate it. Gindy didn’t let up the pressure using a Thoughtseize to nab Cryptic Command from his opponent’s hand and seeing just two lands as the remaining cards for the German. Charles made a Beast with Garruk, the second one he had generated in the game, and at the end of the turn the score was 17–15 in Ruess’ favor, though the game wasn’t looking good for the German.

His draw step yielded another Sygg, and Jan took the opportunity to play it for one mana (net) thanks to his Reejerey then activate Mutavault, give it protection from green and all of Gindy’s creatures, and attack Garruk for enough damage to kill the planeswalker. Still, it left the German without the mana necessary to protect any additional Merfolk from Gindy’s kill spells, and Charlie quickly revealed he had drawn one in the form of Profane Command. That pinched the legendary Merfolk before Gindy smashed in with the entirety of his green horde to drop Ruess to 4. Jan drew for the turn, found no help, and promptly scooped his cards together.

The sideboarding mannerisms of the two players between games spoke volumes about their mind sets as competitors. The frenetic Gindy, clearly excited to be in the finals of the Pro Tour, quickly rifled through his cards and shuffled fastidiously nerves showing through slightly. In contrast, Ruess appeared much calmer and carefully pile-shuffled his deck while considering his game plan for the second game. Gindy bounced around in his chair.

“Play,” his opponent quickly responded in a tone that conveyed pleasantly that he thought that was pre-assumed.

“You know, there is an option to draw,” Gindy meekly joked. “Surprisingly, no one’s taken me up on that this weekend...” He sighed under his breath. 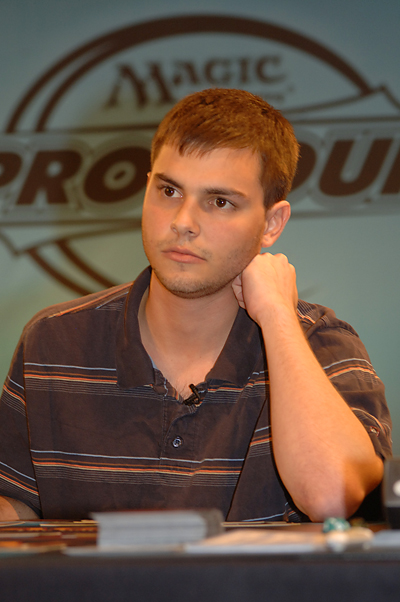 Charles Gindy could give the U.S. its second champion in as many Pro Tours.Perhaps the German should have taken his American opponent up on the offer to draw first, as he started off their second game with a mulligan before making a two-drop in the form of Lord of Atlantis. Gindy one-upped Ruess by playing a two-drop of Wren’s Run Vanquisher revealing a lord of his own in the form of Imperious Perfect for the reduction in the Vanquisher’s cost. Gindy had no three-drop but did play a Mutavault for his land. The open mana seemed to intimidate Gindy, who played Imperious Perfect but opted not to attack his opponent with his now 4/4 Vanquisher. The play seemed odd, but the American had demonstrated a clear affinity for the Elves so far on the weekend.

A Sower of Temptation from Ruess stealing Imperious Perfect was countered by Terror from Gindy who also made a Tarmogoyf. His Wren’s Run Vanquisher lost her fear of the combat step and put the totals at 17–16 Gindy, as the American had Lightning Bolted himself by way of using his Llanowar Wastes. The match continued with a back and forth as Ruess stole Gindy’s Perfect for the second time with a new Sower of Temptation before suspending an Ancestral Vision.

Charles had an evoked Shriekmaw to deal with the new Sower but not until after playing a Garruk for the turn. That let him attack with the team, but he opted to hold Vanquisher back to block a possible attack from two Mutavaults and a Lord of Atlantis. The play was for nothing as Ruess activated a creature-land and attacked the Planeswalker, removing Gindy’s blockers via a Cryptic Command tapping Charles’ creatures and bouncing the Imperious Perfect. Garruk was sent to the graveyard.

Charles wasn’t backing down however, and attacked with his Wren’s Run Vanquisher and Tarmogoyf to put his opponent at 8. He then played a fresh Garruk Wildspeaker, untapped two lands, and played a second Tarmogoyf before passing. Ruess was in trouble, and the two counters left on his Ancestral Vision seemed like an eternity of time before he’d be seeing the cards, and hopefully the gas, he needed to get ahead. His opponent’s next attack dropped him to 2 life and saw Charles’ board increase in size by one Beast token and a Chameleon Colossus. Resignedly, Ruess drew one last card and again scooped up his board.

Outside the feature area where players had gathered to watch the finals on the big screen, a large roar went up from the crowd as Charles Gindy moved one game closer to becoming champion of Pro Tour-Hollywood. Jan, breaking his impassive facade, smiled and said “It sounds like you have some fans out there.”

Grinning, his opponent replied, “Yeah, I guess I do. Who knew? I certainly didn’t....” 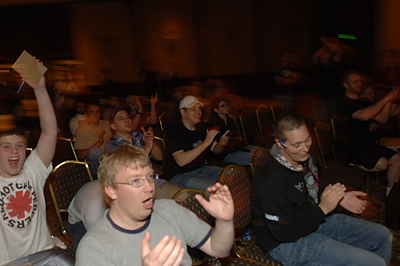 And the crowd goes wild!Both players started the third game of their match with creatures that let them accelerate. Gindy made his on the first turn in the form of Llanowar Elves, while Ruess played a Stonybrook Banneret on turn two. Neither was on the board long, as Jan opted to trade them when Charles aggressively moved the Llanowar into the red zone. On his third turn, Ruess revealed why he was so willing to make the trade as he played a second copy of the card to go alongside a Mutavault.

Sygg, River Guide quickly joined the German’s team, while Gindy had no turn-two or turn-three drops. Still, the American had two Mutavaults, which promised to help him stay in the game by blocking. A Chameleon Colossus also managed to successfully resolve, catching Gindy right back up to the game state when his opponent made no plays on turn five.

The two tried to continue developing their board, and Gindy moved in with the Colossus. Ruess activated a Mutavault and double blocked with his Sygg and the 2/2 land. Before damage resolved, Jan gave his Sygg protection from green and the land traded for the 4/4, a play that seemed very good for Ruess. Post-combat Gindy revealed why he had wanted his opponent to spend mana giving Sygg protection from green by hardcasting a Shriekmaw targeting Sygg. Ruess still had

available, however, and tapped out to give the legend protection from black. Charles revealed the final trump in his plan by using Slaughter Pact in response to neutralize the problematic Sygg, and it looked like the American had turned the game around.

A series of Imperious Perfects from Gindy were met with Sunlances from Ruess but the American eventually got one to stick. Jan continued trying to build his fish forces, while Gindy made a Wren’s Run Vanquisher and a Chameleon Colossus. His creatures were certainly beefier than his opponent’s, and he had more of them thanks to two Mutavaults in play. Ruess had managed a Lord of Atlantis, Silvergill Adept, and Stonybrook Banneret, but a Terror from Gindy took care of the Time Spiral reprint.

Charles turned his Colossus, Vanquisher, and a Mutavault sideways, leaving his Imperious Perfect home to pump all of his creatures. The attack dealt a whopping 9 damage leaving Ruess at just 10. His final draw of the match revealed... a land, and he flipped over his hand to reveal a mana flood. Calmly, he extended his hand to the American with a smile. Turning to his deck, he shrugged and said “Nope... not like that.”

It turns out Charlie Gindy’s midnight trip to Panda Express was fortuitous indeed. 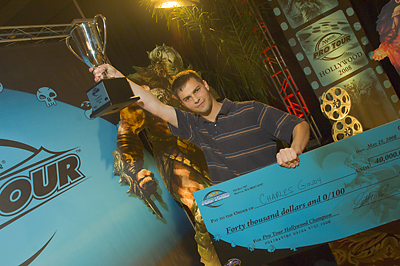