Osawa is a 21-year-old Japanese pro with four Grand Prix Top 8's to his name, but no Pro Tour Sunday appearances. Picked by Tim Aten as one of the drafters to watch this weekend (at least partially because Osawa often manages to beat Aten at the side draft tables), Takuya is looking to add a third Pro Tour victory to Japan's exploding Pro Tour resume. 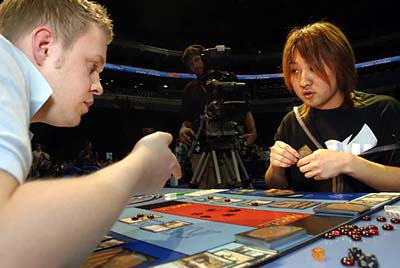 Cameras zoomed in on the final between Brackmann, left, and Osawa.

This chance comes in spite of the fact that the vast majority of notable Japanese pros bowed out of the action on Day 1. Osawa's opponent is Aaron Brackmann, a 21-year-old student from Frankfurt, Germany. Brackmann is also a Pro Tour Sunday debutant, and had to be excited by the at least $22,000 he had already pocketed on the weekend. If he wasn't pleased with his performance already, however, he was in for a bit of a downer when he saw Osawa's decklist. Takuya's deck looked to be a beating, and it would take savvy play and a healthy share of luck for Brackmann to come out on top.

Brackmann won the die roll and elected to play. His first spell was Silhana Starfletcher on turn 3, naming black before dropping an Izzet Boilerworks on the table. Osawa decided it was a bad idea to let the mana producer live long enough to help Brackmann cast anything, killing it with Seal of Doom. Dowsing Shaman plus a Steamcore Weird that killed a new Sporeback Troll from Osawa gave Brackmann the early lead.

Nonplussed, Osawa went one bigger than the Shaman, putting Golgari Rotwurm into play. Brackmann cast Simic Ragworm to add another body to his board, but then frowned deeply when Osawa played Cytoplast Root-Kin. The German chose this moment to push both of his beaters into the red zone, challenging Osawa to call his bluff. Osawa did, but Brackmann had the Wildsize in hand for his Worm, earning a trade of Rotwurm for the smaller Simic monster. 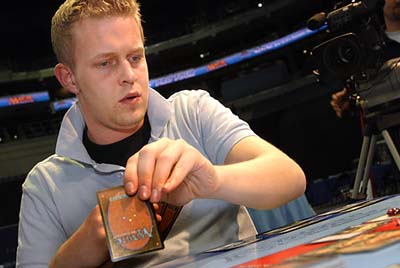 Speaking of monsters, Osawa cracked back with his Root-Kin during his own turn, triggering bloodthirst for Ghor-Clan Savage, weighing his side of the table down with boom booms. Brackmann looked to stabilize with Seal of Fire and Dowsing Shaman tricks, but Osawa dropped an elbow on the game by casting another Rotwurm, adding a graft counter from the Root-Kin to give it a five-butt.

Osawa attacked again, and then cast Streetbreaker Wurm, making this look more like the spring 2006 sumo basho than a Pro Tour final, and Brackmann died a turn later. This was in spite of having cast Gleancrawler, as he was forced to admit that the fat farm topped off by Osawa's Char was just too much.

Osawa had an intriguing start for this one, casting two Utopia Sprawls on the same Forest, allowing him to cast a Streetbreaker Wurm on turn 3. Ouch. Brackmann still managed a decent start of his own, in spite of a mulligan on the play. Lurking Informant, Silhana Starfletcher, and Plaxcaster Frogling hit the board in order.

Wildsize saved the Frogling as part of a double block to kill the Streetbreaker, but Osawa just followed that with a Sporeback Troll, giving him a regenerator for his grafted Mortipede. At the end of another blank turn for Brackmann, he also Scattered the Seeds, giving him a huge lead on the board. The 'Pede took down Brackmann's team, and Brackmann died a turn later when Osawa added Gruul Scrapper to the board as well, putting Brackmann in a huge hole. 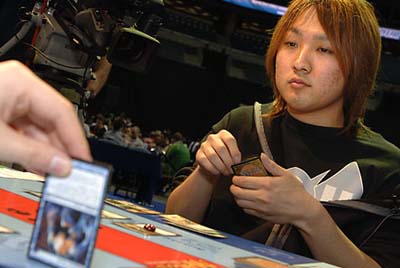 Osawa's tokens put most of his creatures well out of Weird reach.

Osawa double-mulliganned and looked like he would be quickly overwhelmed by Brackmann's beasts and removal. Scatter the Seeds and Simic Initiate were not the formidable force Osawa played in Game 1, but they were enough to stave off some damage while Brackmann flooded heavily on land. Sporeback Troll gave Osawa a blocker that could survive, and Cytoplast Root-Kin made things particularly interesting. Interesting began to approach destructive a turn later when Osawa added Golgari Rotwurm to the board, but Brackmann stabilized by stealing the Root-Kin with a Dream Leash he had been holding the entire game.

After the early stumbles, Osawa's deck was now delivering nothing but gold. This trend continued a turn later when Golgari Rotwurm got through for damage, letting Osawa cast yet another massive beater that he could also regenerate. Electrolyze killed Osawa's two remaining saproling tokens, and now the tension was palpable, as both players continued to scrap and claw at a narrow 5 life.

Osawa's deck now appeared determined to make amends for the double mulligan, delivering Streetbreaker Wurm to his hand, and making Brackmann groan in dismay. The pace of play slowed from a stroll to a crawl at this point, while both players looked deadly serious and determined not to make a mistake.

Turn after turn went by with Osawa attacking and Brackmann chumping, but he appeared to have no relevant answers. Just when it looked like Brackmann finally had one in a Sporeback Troll of his own, Osawa hit Brackmann with a Pyromatics for two, sacrificed his Savage to the Rotwurm to drop Brackmann to one, and then untapped and sacked his troll for the last remaining point of life. Not even a double mulligan could stop Osawa or his deck this time around.