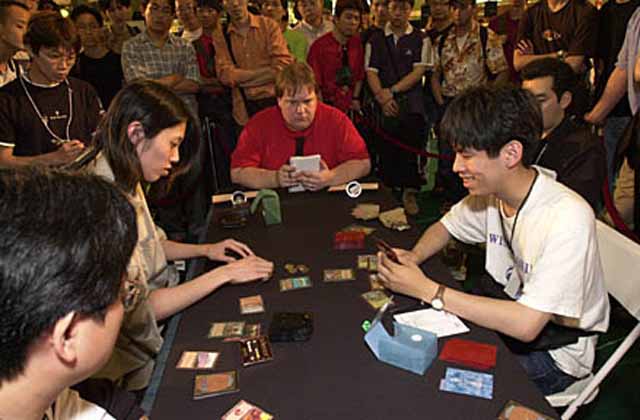 Defending APAC champion Masaya Mori sat down across from Hiroto Watanabe just one match win away from becoming the first person ever to win two Continental Championships. Watanabe is from Miagya Prefecture, Japan and has little experience at top-level Magic events while Mori is from Tokyo, Japan and has the second highest finish ever on the Pro Tour from a Japanese player (16th in Chicago last December).

Mori's game one Rishadan Port was really effective against Watanabe's lone forest early in game 1. Port #2 meant Watanabe's own Port was getting tapped every turn as well and soon Watanabe was forced to discard. Mori showed off one of the personal touches that he put on his Angry hermit deck when he cast Pillage and destroyed Watanabe's forest. Watanabe did then draw a forest and cast a Llanowar elf, but then Mori "went off." Mori cast Deranged Hermit, then tapped Gaea's Cradle to get the colorless mana for Arc Lightning and Tangle Wire. Watanabe scooped immediately. The entire game lasted maybe five minutes. 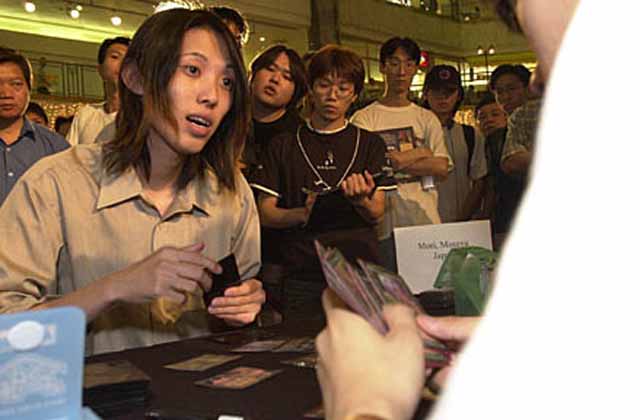 When Watanabe played a turn 2 Rofellos, Llanowar Emissary that was Mori's cue to show why Angry Hermit is so good against Trinity Green. Both decks use elves to get the fast mana they need for all their four and five mana goodies. However, one of the decks has Arc Lightning and that turns this pseudo-mirror match into a lopsided 75/25 thrashing by the Angry Hermit deck. Alas, Mori did not have an Arc Lightning in his game two draw and Rofellos lived to cast Masticore. Mori did have another of his copies of Pillage, which he promptly used to bury Masticore. Mori's Ports made it difficult for Watanabe to get more than 3 mana during his main phase and he was visibly frustrated as Rofellos could do nothing but attack. Mori didn't have any real threats in his own draw so he couldn't really punish Watanabe's mana problems. When Watanabe finally drew a land - Gaea's Cradle - he exploded with Plow Under and then two Deranged Hermits. Mori finally lost his first game of the day. 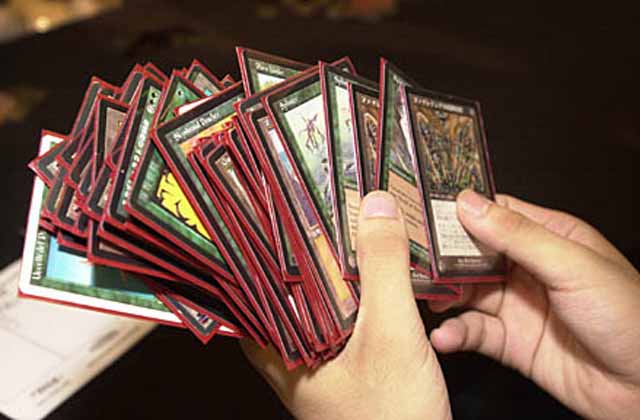 Both players had amazing mana draws in game three. Mori led with Bird of Paradise and then played both Llanowar Elf and Priest of Titania on his second turn. Watanabe, on the other hand, played turn 1 Elves and turn 2 Rofellos plus Gaea's Cradle. What then happened was one of the biggest beatings I have ever witnessed: Mori untapped for his third turn, tapped his Priest to cast Masticore and tapped his other creatures and lands to kill both of Watanabe's mana critters. My notes at this point just say "I cannot believe what I just saw." Watanabe drew two more cards and then packed it in - a fourth turn kill for Mori!

Watanabe started game four with a Bird and Rofellos. Mori once again failed to draw Arc Lightning, instead settling for Tangle Wire. Tangle Wire didn't help for long, especially once Watanabe cast Plow Under off of a Cradle and then shot Mori's Elves with Masticore. Mori blew a Thran Quarry just to cast Plow Under while Watanabe was Masticore "locked" (one card in hand which he was discarding every turn), but Mori couldn't find any answers. Watanabe's Rofellos allowed him to even the match at 2 games apiece. 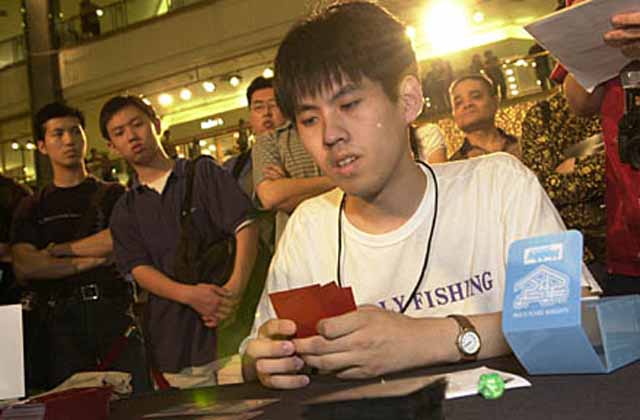 It all came down to the fifth and final game. Mori led with Bird of Paradise and Rishadan Port. Watanabe played Llanowar Elves and Rofellos yet again. On Mori's third turn he got to show off another of his personal touches to Aaron Forsythe's initial Angry Hermit design. Mori knew that one key to the deck was Arc Lightning so he put more of them into his sideboard in the form of the Prophecy card Flameshot. Flameshot was enormous in game five - it destroyed all Watanabe's creatures and shut down his Cradle.

Mori then put Watanabe on a clock by casting Deranged Hermit. Mori greatly limited Watanabe's options by declining to pay the echo and casting a Tangle Wire instead. When Mori drew and cast Tangle Wire #2 on his next turn, Watanabe was helpless for thee attack phases. The Wires faded away with Watanabe sitting on 4 life, but Watanabe was able to play a couple 1-toughness blockers. That's when Mori played Masticore, cleared a path for his squirrels, and won the APAC championship. 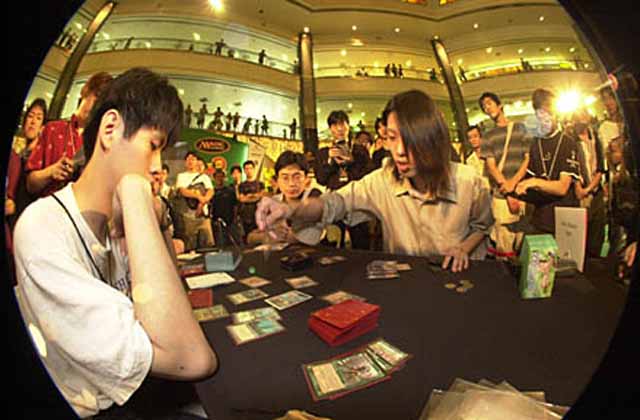 Congratulations to Masaya Mori, back to back APAC champion. And don't be at all surprised to see him make a run in Brussels at the World Championships next month.