Finals: How Sweep It Is! 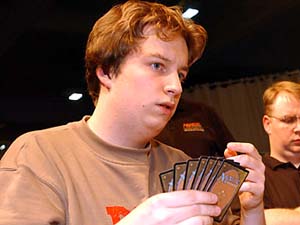 we're down to one final match. Both players have played on Sunday before, but neither has taken home the trophy and big check yet. For Fujita in particular there's a chance to rewrite history, as he makes his second attempt to become Pro Tour Champion. His first time out he was smoked by Zvi Mowshowitz and "The Solution," a deck that became legendary, and partly at his expense.

This time around it's Limited, and he's again up against a monster. Siron got such a lion's share of the red cards in this draft that of all the red cards in the main decks of the Top 8, all but two of them are in his deck! There's no question Siron's deck is a massive spiked club of pain and destruction. The real question is whether the tricky blue-green concoction Fujita has brewed up will be an innovative contender or a baby seal.

Siron won the flip and chose to play first, starting out with Akki Underling and then Kami of Fire's Roar on turn four. Fujita's draw was smoother on the curve, going from Promised Kannushi to Sakura-Tribe Elder, Soratami Mindsweeper, and then a fifth land and "go." Seeing the cards still in Fujita's hand, Siron was a bit surprised.

"Yes" was the reply. Siron thought for a bit, then played out his Sokenzan Spellblade, which ran right into an Oppressive Will. Fujita played out land number six, and again said go.

At this point, alarm bells were clearly going off in Siron's head, and there can be no question he had Overwhelming Intellect on his mind. Holding double Barrel Down Sokenzan and a Yamabushi's Flame, he decided to light up the Mindsweeper and send in his guys for four.

On the next turn, Fujita played Child of Thorns, and again said go. With six lands yet again conveniently left open, there was now zero chance that Fujita wasn't at least representing Overwhelming Intellect. The thing is, whether this was a bluff or not was about to be a big deal, because this is when Siron drew his Ghost-Lit Raider, one of the very best cards in Saviors, and a terrible beating of a threat against Fujita's blue-green deck, since Fujita has almost no way to remove it once it's in play and active.

Siron thought about this one a long time, and who could blame him. The card is just that powerful, so the decision was huge. Eventually Siron decided that the threat must be real, and instead just ended his turn. After such a long pause on Siron's turn, it was all the more noticeable when Fujita just drew his card, played a land, and immediately said "go" again, this time with the hint of a knowing smile.

Over the next couple turns, Underling kept coming in for 2 and Fujita kept saying go. Once he hit nine mana an Elder Pine came to play, again leaving up six mana. But, now Siron had seven cards in hand for his turns, which meant his Akki Underling was a far more serious clock. 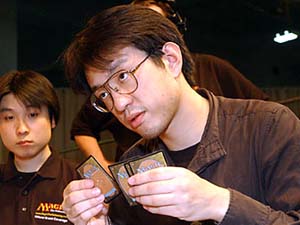 'Does he think this is a counterspell? Let's hope so.'

Siron brawled in with Akki Underling and Kami of Fire's Roar. Fujita gang-blocked the Kami with Elder-Pine and the Kannushi while Child of Thorns stepped in front of the Underling. First strike damage was assigned and the Child was sacrificed to pump the Elder-Pine, but Siron cast Barrel Down on it in response, sending it off to the graveyard, which left just the Kannushi in front of the Kami, causing the Kannushi to die as well. Fujita was able to soulshift his Child of Thorns back, but now he was way behind in position and would have to make a move.

On his turn he tapped out to play River Kaijin, Child of Thorns, Moonbow Illusionist, and a Phantom Wings, bouncing back Kami of the Fire's Roar. With so many spells coming out it was strong confirmation that Siron had made the right call that Fujita had been sandbagging. The payoff came on his turn, when he finally got to drop the bomb into play that he'd been setting up so patiently. Fujita did his best to hold his position with giant monsters like Moss Kami, but the combination of Ghost-Lit Raider and strong removal was way too much to overcome, and his position collapsed in a few short turns.

Between games Siron consulted his sideboard and decided to switch out Blademane Baku to move Frost Ogre into his deck. His deck being so good against smaller creatures, Siron was likely looking to bring in some extra meat to throw in the way of Fujita's beefier beaters.

Fujita chose to play for this one, starting with River Kaijin and then again casting nothing on turn four. Siron came out a bit slowly this time, getting turn-two Akki Underling but nothing else for the first few turns. A couple turns later Underling charged into the River Kaijin. Fujita went for Outer Calm, Inner Strength, but Siron had the Barrel-Down for four points of damage in response, taking out the troublesome blocker, canceling the growth spell, and juicing up his Underling all at the same time.

At this point Fujita was in real trouble, because the Underling meant he couldn't just play the waiting game while setting up his best monsters. One weakness of playing this kind of control deck is that it can be very difficult to deal with early beaters if something slips through your defenses. Tap out to stabilize and suddenly you could face something unbeatable. Most draft decks can't punish you for this in just one card, but Siron's deck isn't most draft decks by any stretch of the imagination, something that was surely on Fujita's mind as he tried to figure out how to get out from under the situation. 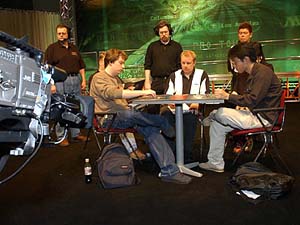 The stage was looking lonely for Fujita.

On the next turn, rather than play a creature and potentially walk into Intellect, Siron went with the great plan of instead playing Captive Flame, making any of his creatures threaten massive damage, and again forcing Fujita into a position of having to respond with an answer. This time, however, Fujita had it, in the form of Pithing Needle. The problem was that while Captive Flame was now in check, the Underling definitely wasn't. Worse, it was joined next turn by Ronin Houndmaster, dropping Fujita to just 8.

A Consuming Vortex sent the Underling back, at which point Siron made the only mistake I saw from him in the finals. Not realizing how many cards were in Fujita's hand, he just quickly recast the Underling without playing a land first. The Underling ran into an Oppressive Will for three, and a surprised Siron only then noticed that he was one mana short. Underling went to the graveyard. Siron belatedly played his Mountain out, then added a Frostling to his board.

Things looked up briefly for Fujita when he cast his Bounteous Kirin next turn, but those hopes were dashed when it immediately ran into yet another Barrel Down. Siron flashed him the Yamabushi's Flame in his hand and Fujita scooped up his cards for Game 3.

As they shuffled, Siron turned to me with a grin, saying "I misplayed there right? Yeah I did. This deck is so broken, it's easy to get lazy."

This observation was greeted with chuckles from the crowd and then it was time for the finale.

Fujita changed it up this time, choosing to draw after taking such a beating from Siron's juiced up Akki Underling. Sure enough, Underling showed up on turn two for the third time in three games.

"Good choice!" was the smiling reply from Siron, who was managing to have a pretty good time through all this (you know, with the ridiculous deck and all). A Cloudskater came down for Fujita to join a Child of Thorns, and then he was rocked back into his chair when Ghost-Lit Raider came into play.

Fortunately for Fujita he had Pithing Needle next turn which, if I had to guess, I'd say came right off the top. The situation convinced the now-embarrassing Ghost-Lit Raider to just charge in and trade with Child of Thorns. Siron added Kami of Fire's Roar to the table and passed the turn. At this point the game became much more of a race of summoning creatures and sending them to the red zone than had been the case with either of the previous games. Here's how the next couple turns played out: (Fujita's moves in blue)

At this point the situation was slipping away for Fujita and only going downhill from there. Siron pinged the Hulk with his Honden, which Fujita acknowledged with another knowing smile. Spellblade got pumped up, Yamabushi's Flame finished off the Scaled Hulk, and Siron's creatures came over to make it 14-9 Siron. 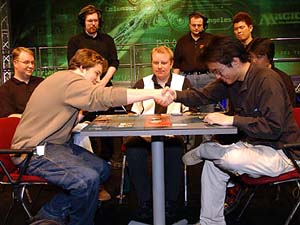 The inevitable became clear and Fujita extended the hand.

Fujita summoned a Springcaller and Promised Kannushi, but at this point there was no coming back, and his amused expression communicated volumes. Harbinger fell to Honden, Spellblade double pumped, Frostling came out to keep the Kannushi from blocking thanks to the Kami of Fire's Roar, Springcaller took one for the team by stepping in front of the Spellblade, and the Kami took Fujita to 7.

At this point the game was unwinnable for Fujita, and both players clearly knew it. Fujita began joking around with several of his cards over the next couple turns as his life total continued its battered journey to zero. When it was all over, the Pro Tour had a new champion in Siron and Fujita would have to wait for a third try to take home the trophy. But throughout the end of the brutal match, and the awards ceremony for that matter, Tsuyoshi Fujita was all smiles.