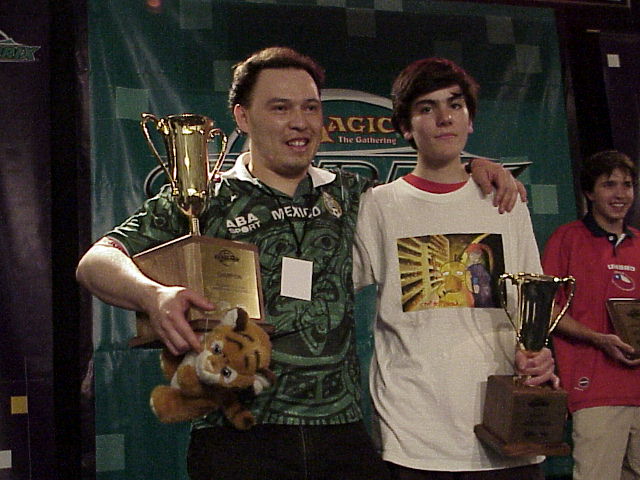 As the first Grand Prix in Argentina is finally winding down, it is a diverse group of players from all over South American, rather than a handful of North American pros that are competing for the title. The final match came down to the matchup between combo and land destruction.

Hugo "Ocho" Araiza from Mexico is playing a Pandemonium-Saproling Burst deck commonly known as "Blackjack" or "21". When two of those cards are in play, it is possible to immediately deal 21 points of damage via Pandemonium, by removing counters off the Burst one at a time, hence the name. A similar deck won Grand Prix: Sydney a week ago.

Araiza's nickname means "eight" in Spanish. He earned it only a few days ago, while participating in a Rochester draft. Araiza was in the eighth seed and was often forgetting when it was his turn to draft a card. Gary Wise, playing in the same draft, did not know this player's name, and so he kept shouting out "Ocho!" to remind him to draft. The nickname stuck.

Ocho's opponent is Walter Witt from Chile, playing mono-red. While an aggressive Sligh strategy used to dominate Extended once upon a time, that deck is no longer tier one because the metagame shifted. Witt's deck is different. It is a Ponza strategy - combining land destruction and direct damage with fast creatures.

Witt won the die roll, but he was forced to mulligan away a hand with no lands. His new draw was considerably better, and he was able to make the perfect opening play: Mountain, Jackal Pup.

Eventually Ocho managed to get an Underground Sea and City of Traitors onto the table and begin casting search spells. He used Intuition to get an Attunement (placing the other two in the graveyard), cast Frantic Search, used Attunement, recast it, and used it again. His graveyard was quickly filling up but he was unable to "go off" quite yet. 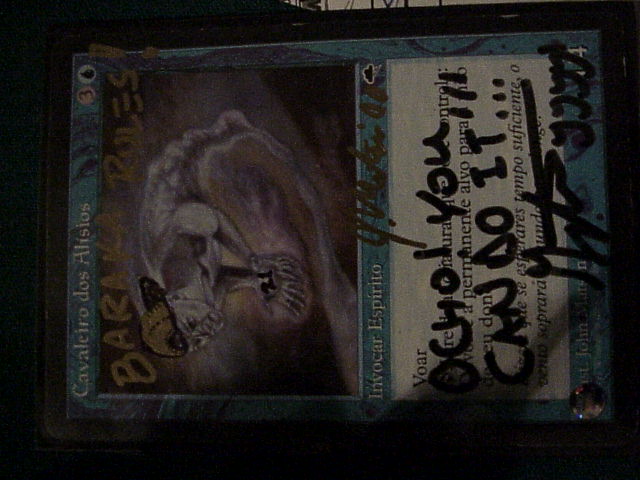 In the meantime, Witt had a pair of Mountains and a Dust Bowl in play. He also had a pair of Avalanche Riders in hand - a single land would allow him to destroy an Underground Sea, leaving Ocho with City of Traitors as his only land - thus several turns away from being able to Replenish. However, Witt drew non-land cards turn after turn. Eventually he did draw a land - but it was a Ghitu Encampment and could not help him do anything that turn.

On the following turn Ocho finally cast Replenish. Although he still did not have Pandemonium, Replenish brought two Saproling Bursts and three Attunements back into play. Instead of setting up a combo, Ocho was perfectly content to make Saproling tokens and kill Witt with creature damage.

Second game was all about Ocho top-decking his cards just a turn too late. Witt played first and cast his first spell on turn 2 - he dropped a Dwarven Miner a turn before Chill hit play.

Ocho drew THREE Force of Wills in a row after that, but they could not be of any help. With every land in Ocho's deck being non-basic, Dwarven Miner was possibly the very worst thing that could happen to him at the time. The only card in Ocho's deck that could deal with this card was a Hydroblast, but he was not drawing it.

Instead, Ocho drew more lands and eventually a fourth Force of Will. He used the free countermagic to slow Witt down, countering any threat his opponent played. However, a second Dwarven Miner entered play and Ocho was now completely locked. Ocho conceded while at eight life points.

Ocho got to play first again, and so he managed to play a turn 2 Chill - before Dwarven Miner could possibly be played! Although Witt managed to sneak Jackal Pup into play before then, it soon met with a Hydroblast.

Witt kept Ocho down with Rishadan Port, dealing some damage in the meantime because the land he was tapping was a City of Brass. Witt was playing lands in the meantime, trying desperately to keep up with Ocho despite the Chill.

On turn four he was finally able to cast his Dwarven Miner. Ocho agonized for almost five minutes trying to decide whether to allow Dwarven Miner to resolve or to Force of Will it throwing away Intuition - the only other blue card in his hand. Ocho finally decided to let Miner resolve and cast Intuition, presenting his opponent with 2x Pandemonium and a Saproling Burst. Fearing Replenish, Witt let him have the Burst, in addition to the second Burst that Ocho was already holding in his hand.

Despite having his land blown up, Ocho had enough mana to cast both Bursts over the next two turns.

In the end it was not combo, but good old-fashioned creature beatdown that decided this match, as a gang of Saproling tokens rushed Witt and reduced his life total to zero in two attack steps.