This match is the absolute pinnacle of this weekend. It all culminates in three games here for Justin and Jamie. Will Justin and his team continue their dominance of this format? Will Jamie, who's never been to a Pro Tour before, take down this seasoned veteran? I'm eagerly awaiting the results. 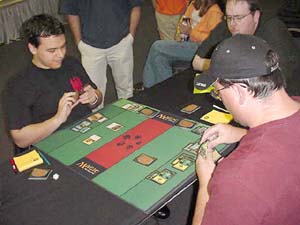 "I cried greatly when you got two Stingers and a Dragon Scales for each," Jamie tells Justin before the match begins. Justin just smiles.

The first creature in play is a Deftblade Elite on Justin's side, and Jamie countered with his own Shepherd of Rot. When Justin provoked the Shepherd into blocking, he said, "Fight me right now!" and Jamie put his Shepherd in the graveyard.

Jamie failed to find another creature, as Justin played a morph and then attacked with it and the Elite on his next turn. Jamie played a morph to stop the beating, and when Justin attacked again, Jamie flipped up Nantuko Vigilante to kill the Dragon Scales on Justin's Elite.

Justin cycled away Gempalm Avenger to give his soldiers +1/+1, and ended up on the better end of that combat step. With first strike damage on the stack, Justin clearly came out ahead and Jamie can't figure out what to do next.

Jamie played a morph and passed the turn, and Justin added a Pearlspear Courier to his army on the table. When Justin attacked this next time, he played Astral Steel to give his Deftblade Elite enough power to punch through Jamie's blocking morph creature.

Jamie has managed to draw some elves at this point (Symbiotic Elf and Wirewood Herald) and put them into play, but he doesn't look very hopeful at his chances to come back from Justin's overwhelming offense. Justin attacked with his Daru Lancer, and Jamie chose to block with Wirewood Herald and grabbed himself a Wirewood Guardian in the process.

Justin remained cool and played a Covert Operative. He made a tough decision and attacked with only the Operative on his next turn, bringing Jamie down to three – if Jamie doesn't find a way to deal with that Operative soon, he'll be toast! Adding insult to injury, Justin played an Aven Farseer and passed the turn. After Jamie drew his card, Justin grinned and asked, "Next game?"

Jamie just nodded as he packed up his cards.

"I'm not going to board anything – I'm sticking with the decisions I made during deck construction," Justin said.

"My hope is to crush your hopes," Jamie retorted.

Justin played Deftblade Elite on his first turn, and Jamie is forced to counter with Wirewood Herald. When Jamie taunted Justin for not attacking, he said, "Who attacks into Wirewood Herald?"

Jamie decided to play the Savage to stop the beatings, but Justin had some other ideas. They took a while to materialize, but he finally decided to attack and provoke the Savage into blocking. Jamie pushed the Symbiotic Elf up to block, too, leaving Justin with few options to save his Deftblade Elite. He opted to prevent all the damage to his Elite and dealt four damage to Jamie as well.

Jamie cast a Brontotherium and Justin replied with, "Oh, crap." When Jamie attacked, Justin chose to take the damage rather than get anything in the way. On his sixth turn, Justin hadn't found more than three lands, but is still valiantly keeping up the offense in the air.

Jamie, on the other hand, has been keeping up with his land drops exceptionally well. When he cast Dragon Shadow on his Brontotherium, Justin said, "Dragon Shadow, eh?" and seemed rather unhappy at this turn of events. Jamie turned the Brontotherium sideways to take Justin down to 12 – two more turns and Justin is toast. 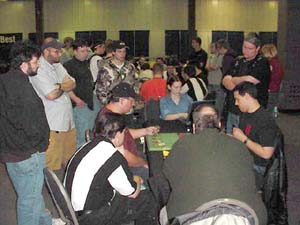 Jamie played a Nantuko Husk to add to his army, and Justin had no choice but to attack him back with the Harrier. Justin played his fourth land and said, "This game's all about luck! All about luck!"

Justin cast Dirge of Dread on his Nantuko Husk, but forgets to draw his card until the judge reminds him. "What, no drawing? There's got to be a game loss in there somewhere!" Justin quipped. Jamie just smiled and attacked, winning the game handily.

Justin opted to play first. "I just want to not mulligan – that's the advantage that I'm looking for." He also opted to keep his hand, ending up with that advantage that he banked on.

The first card played in this game is a Crypt Sliver on Jamie's side. Justin countered with a morph creature of his own, and Jamie played a morph of his own to add to his Sliver. "Secret morph," Jamie calls it.

Justin played another morph – his entire side's face-down now! He also played another land, putting an end to missing fourth land drops. Here's some tech right from Justin to you, everyone – playing lands is pretty good.

With four mana available, Justin taps out to play an Essence Sliver. Jamie answered with another morph, leaving half of his army face-down. When Justin played Dragon Scales on his Sliver, things got a bit more grim for Jamie. "This is going to go for days," Jamie said as he blocked with his Crypt Sliver and regenerated it. Both players gain some life, but the game is briefly interrupted by Zvi Mowshowitz to tell Justin that they've won the Grand Prix.

Justin and Jamie both decided to keep playing, thus prolonging the magic for just a little bit longer. Justin plays a Covert Operative, and attacked with the Operative and the Sliver on his next turn. Jamie opted to block the Sliver with his morph, his Sliver, and his Symbiotic Elf, and flipped over a Skinthinner to kill the Operative.

Jamie thought that the Sliver would die, but Justin realized just in time that his Sliver could regenerate itself, and did precisely that. The spectators oooh at Justin's excellent play as Jamie probably feels pretty embarrassed.

Justin made a very aggressive move when he attacked with his Sliver and two morph creatures, and assigned damage masterfully to Jamie's creatures. Justin went to 36 as he brought Jamie down to 15. But Jamie opted to Swat Justin's last morph, and played a Lingering Death on Justin's scary Sliver. 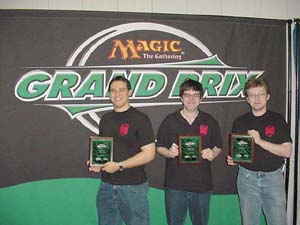 In response to the Swat, Justin turned up Daru Lancer. He then played a Daru Stinger with an amplify of two. His creatures are much better than Jamie's, even though Jamie has more of them. When Justin attacked with the Lancer once again, Jamie blocked with the Wirewood Herald and searched out Wirewood Guardian.

Justin tapped his Pearlspear Courier to give his Lancer +2/+2 and attacked. Jamie said, "I'm not blocking that," and took five, going down to eight. Justin played another Stinger and amplified it twice, saying, "I'm not going to kill you – I'm having way too much fun to just kill you!"

Jamie let the Lancer in again, going to three, while Justin is still at 42. Jamie draws and plays a Hundroog as the crowd cheers, "Hundroog!" This time, Justin opted not to attack, and instead kept his army at home.

Jamie casts Dirge of Dread and sacrifices most of his creatures to his Nantuko Husk, but it's just not enough. Jamie can't possibly deal 42 damage to Justin in one turn, and concedes shortly after. "Was the Crypt Sliver the card you boarded in?" Justin asked after the match.