"Shut up," said Owen Turtenwald to a big laugh from the crowd that was filled with interested bystanders with allegiances on both sides of the red zone. While there was a lot at stake in this match-a $2000 difference in the cash and two extra Pro Points for the winner-the reaction from the crowd was indicative of the good feeling that was spreading through the room about the potential U.S. National Team.

Sam Black's star has been ascending since Worlds last season when he won the Car Tournament playing an unconventional Goblins build. He has been at the heart of the Wisconsin Magic community through his gaming store and brings a network of players to the table that includes the likes of Adrian Sullivan and Brian Kowal. 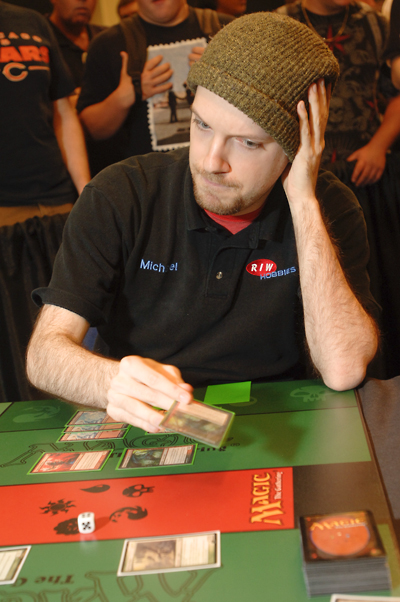 Michael Jacob makes the U.S. National Team for the second time in as many years.This was Michael Jacob's second time on the National team after a Top 4 finish last season with mono-green. The Michigan-based player is a seasoned veteran of many card tournaments and had players like Patrick Chapin and Mark Herberholz in his corner. Both players seemed to agree that Jacob was the favorite in the match-up but Black was not going to roll over with the title so close at hand.

"How many times have you played Elves this weekend?" asked Black as the two players went through the pregame rituals.

"None, but I play against it a lot in my store," said Jacob. "The only time I lose is when they get Garruk."

"I guess you are feeling pretty good about this match," laughed Black, who did not have Garruk Wildspeaker anywhere in his deck or sideboard.

"Why is Garruk good against you?" asked a puzzled Black, who obviously did not think much of Elf decks with Garruk.

"I don't really play a lot of burn and Skred does nothing against it," shrugged Jacob.

The Head Judge then gave Black a stern fisheye as the Wisconsin player's cell phone started to ring.

"About to start the Finals. Can't talk to you. Bye," said Black as he switched off his phone and the two players dealt out their opening hands of the 2008 U.S. National Championship.

Sam kept his first seven but Jacob was looking at six cards and a lone Mountain. He pounded the table as he mulliganed, seeing a pocket of lands on top of his deck.

"I always look, but I am just going to throw 'Never look' out there," laughed Black.

Jacob kept the next six, which featured a pair of snow-covered peaks. On turn two, Sam revealed Imperious Perfect twice, once for his Gilt-Leaf Palace and once for the Wren's Run Vanquisher he played that turn. The Perfect came down a turn later, and the two Elves were mowed down by Incinerate and Skred. Jacob also played Figure of Destiny, easily the most popular Eventide card in the Top 8.

Tarmogoyf and Ashenmoor Gouger came down on their respective sides of the red zone. Jacob's monster could only watch helplessly as Black activated Mutavault and Treetop and rumbled over for seven. 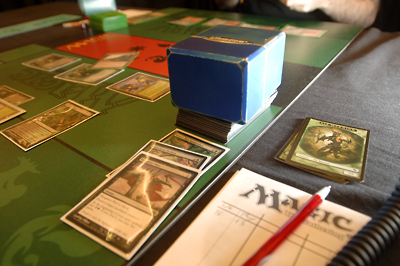 Black is definitely not going to forget to pay for his pack.The Gouger did what it does best and got in for 4, while the Figure sat back with four mana open. It was the same play as last time from Black, but he had Slaughter Pact for the potential 4/4-and a whopping upkeep memory aid that even the most absent-minded Magic player could not possibly miss. Jacob fired a Flame Javelin at the Goyf and fell to 8 from the remaining attackers.

Jacob-who also played Magus of the Scroll-hoped to keep the Mutavault at bay with Blood Knight, and Incinerated the Treetop Village. Black had Slaughter Pact for Blood Knight and got in with 'Vault to drop Jacob to 6.

The Gouger kept coming. Jacob was holding Demigod but his fifth land came into play tapped. Black played Imperious Perfect and attacked with a 3/3 Mutavault. Jacob nudged his Magus of the Scroll in the path and activated to kill the Perfect revealing the hasty flier. That was enough for Black to move onto sideboarding.

At this point in the match the 3rd place playoff match was tilted in Cheon's favor.

"It is going to be so great if Cheon wins," said Black, sharing his opinion that last year's team was not a fully-rounded squad.

"Agreed," said Jacob, who was a member of last year's team. "We knew we were screwed."

The amiable conversation shifted to the topic of their own decks as the two players shuffled up.

"I am so glad you don't have Warhammer. Or Troll Asetic. I hate that guy," said Jacob which prompted a raised eyebrow from anyone who recalls his National deck from last season, which prominently featured Troll Ascetic.

"I mean, I love him. It is my favorite card but I hate to play against him," Jacob clarified. "I wanted to play with him, but he seemed so bad in testing. People kept playing Boggart Ram-Gang instead of Gougers." The Ram-Gang's wither lets it kill Troll Ascetic, regeneation or no.

"Is it really your favorite card? Mine is Corpse Dance," said Black as the two team members got to know each other a little better.

The topic switched to Jacob's deck and the 4/4 monster that had been doing the bulk of the heavy lifting all weekend.

"Ashenmoor Gouger has been the best creature for me," said Jacob. "I read the interview with the Japanese where they said it was bad but no one can kill it. They can't Nameless Inversion, Terror, or Slaughter Pact it. And when they Sower it they can't block." 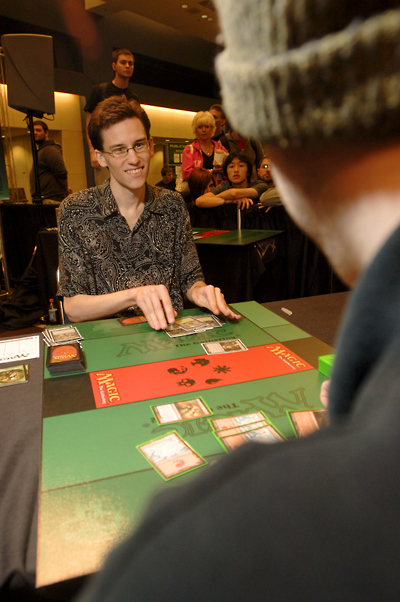 Sam Black made a name for himself at last year's Worlds-and this time, he'll be playing in the main event.Black came out with Llanowar Elves and Tarmogoyf. He activated Mutavault and attacked Jacob for 3, then added Treetop Village. Jacob evoked Spitebellows to kill the Tarmogoyf, but he quickly fell to 12 from the Village and the Elf.

Black played Primal Command to Fallow Earth a land and tutor up Chameleon Colossus. Jacob did not have a play on four lands the turn previous and none this turn either until Black played Wren's Run Vanquisher and Chameleon Colossus. He Flame Javelined the Colossus and had to play a Demigod of Revenge without an attack, keeping the 5/4 back to block

Kitchen Finks and Boreal Druid came down from Black's hand, but he had no attacks. Jacob evoked another Bellows for the Vanquisher and added Magus of the Scroll. Black activated Village and Mutavault attacking with the two lands, Kitchen Finks, and Boreal Druid. He left Llanowar Elves back. Jacob nudged the Demigod in the direction of the Treetop but was undecided if he wanted the Magus to do anything. At least, it jumped in the path of the Druid. Tarmogoyf came down as a 4/5 post-combat.

Magus of the Moon shut off Black's access to the mana that shares his name and also shut down the man-lands in play. Demigod traded with the 'Goyf, and Jacob took 3 from the Finks. He played another Demigod and got the previous one back into play as a bonus. One roared across while the other sat back to repel invaders. Jacob was at 4, and paused to decide how to block when Sam sent in Kitchen Finks and Llanowar Elves. He decided to let Black gain life and ate the Finks. Black played another, though, and went all the way up 19. Jacob attacked with one Demigod and then played a THIRD copy, but once again, it had to stay back to block.

Black played Slaughter Pact to kill the Magus of the Moon and turn on his man-lands, creating an attack that the tapped-out Jacob could not extricate himself from.

"I don't usually expect to beat the 'three Demigod of Revenge' draws," marveled Black after the game.

"What did you have, four or five man-lands that game?" shrugged Jacob. 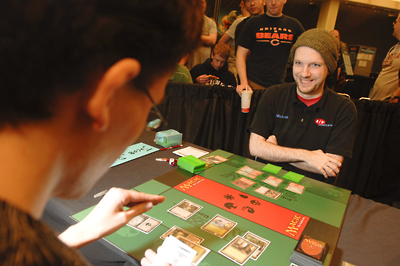 Jacob has reason to smile.Jacob had to ship back a two land / three Demigod hand and looked at his top cards once again. He was happy with the decision this time when he saw a fourth Demigod on top and no lands even close. A Vanquisher became the vanquished when Jacob incinerated Black's turn two play. He had no third land.

At this point Paul Cheon was announced as the winner of the 3rd place playoff and there was a cheer from Black as that meant the roster was final.

"That is exciting," clapped Black, before both players quickly turned their attention back to the match that would determine that team's captaincy. Incinerate took out Tarmogoyf and two Skreds took down Treetop and Mutavault a turn later. Imperious Perfect helped drop Jacob to 12 when a Boreal Druid got in for 2. Jacob found his fourth land and tarnished the Elf lord with Murderous Redcap.

Black restocked quickly with Civic Wayfinder and Tarmogoyf, the latter of which attacked into Redcap. The Goblin Assassin blocked 'Goyf. With damage on the stack, Jacob played Sulfurous Blast and cleared the board. But only briefly, as Black was still able to play another tarmogoyf and Llanowar Elves after the dust settled.

The game became a race between Jacob's Demigod and Black's lone Llanowar Elves. The score was 7 to 3 in favor of Black when Jacob played a second Demigod. Black had Sudden Spoiling to stave off his doom but it was not enough. Spoiling had been the.last card in hand and he found no answers to the pair of Spirit Avatars on top of his deck.

If Black felt any of the pressure of the match it was not showing. Being down two games to one could not dampen his enthusiasm about the lineup for Worlds this year.

"This team is so exciting," Black said. "Are you a builder?" he asked Jacob, trying to understand what people's roles might be on the team.

"Nooooo..." said Jacob, "but I am a good player and I like to help people out with decks."

Jacob then changed the subject to the previous game. "Sudden Spoiling, huh? I was not expecting that one."

It turned out that Black's timely rip in the quarterfinal match with Cheon was the result of an accident where he shuffled his entire board into his deck and then took a few of the wrong cards out. 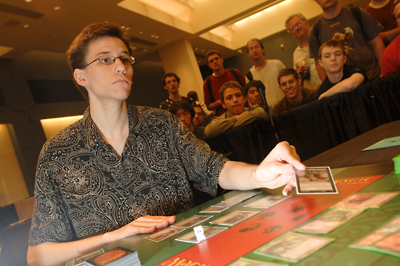 Sam Black makes a final bid for the National Champion title.Figure of Destiny showed up on time for Jacob on turn one with a Tarmogoyf for Black. With no cards in the yard the Figure was able to get in for two on the second turn. Jacob dug up a Swamp with Civic Wayfinder and took two from Figure. No pumps from Jacob who used his mana instead to make a Gouger.

Chameleon Colossus made a brief appearance for Black before being dispatched by Spitebellows. Black fell to 10 on the attack. He played Vanquisher and Llanowar Elf and then snuck in an attack for three. Jacob cracked back and killed the Vanquisher before blockers. A valiant Elf jumped in the way of the Gouger and Black only fell to 8.

Primal Command put a land on top and got a creature. Jacob Incinerated Goyf before the sorcery could settle into the graveyard. Black found Kitchen Finks and played a Druid. Wayfinder darted in for 2 damage to Jacob but Magus of the Moon locked Black out of any of his answers, and the Wisconsin player extended the hand to congratulate the newest U.S. National Champion.

Michael Jacob defeats Sam Black 3-1 to become the 2008 U.S. National Champion! Jacob will be joined on the team by Sam Black and former Champion Paul Cheon, with Marsh Usary as alternate. 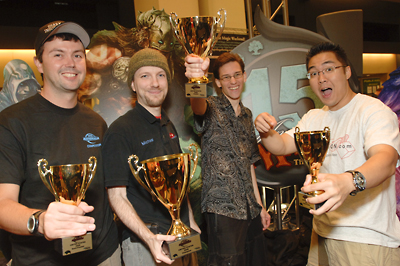