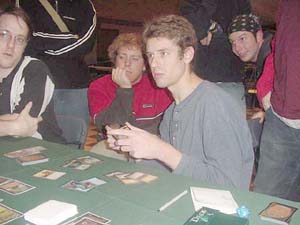 Jeff Cunningham came to this tournament with one goal in mind: make the Top 4 to get a slot in the next Masters Event. He accomplished that about an hour ago, and now he figures to win the whole event. Why not aim high? Cunningham's draft was rumored to be sketchy, due to many other players switching into black once he set himself in the dark color. But he got enough good cards, including an Infest and a pair of Wirewood Savages with tons of Beasts.

Jeff's unlikely opponent in this match is 24-year-old Shaun Doran of Rochester, NY. Shaun has never attended at Pro Tour, but he is technically not an amateur thanks to the lone PT point he earned by finishing exactly 32nd at GP Cleveland. Doran's deck has a couple high-quality bombs – Exalted Angel and Riptide Replicator. It also has lots of Pacifisms and fliers, the kind of cards that make blue/white – generally avoided in this format – work.

Cunningham got to play first in Game 1, but Doran had the first man down, a Battlefield Medic. Cunningham put out a pair of Wirewood Savages on the next two turns, but Doran had literally nothing. He had kept a two-land hand going second, and didn't draw a third for the first five turns.

Cunningham added a Screeching Buzzard, and then started dropping the double-cantrip Beasts: Spitting Gourna and then Spined Basher. Doran had nothing and scooped, shaking his head.

Cunningham had to mulligan in game 2, and couldn't draw the second forest to put out his Elvish Warrior on turn 2. Doran made a morph on turn three, and then Cunningham had a decision to make.

With three mana, he could cast Wirewood Savage, a morphed Gourna, or Infest. If he put out either of the creatures, the opportunity to use Infest to great advantage might never come up. And if the morph turned out to be Exalted Angel, well, that would be the game.

He decided to cast Infest, just to kill the morph. The dying 2/2 turned out to be... Exalted Angel! A direct hit!

Doran was shaken, but he had more stuff to play: another face-down guy, then an Ascending Aven. Cunningham put out his Wirewood Savage and a Frightshroud Courier, but he refused to play the Gourna face down, as he wanted to cast it honest if and when he drew the second forest.

That decision probably cost him the game. He never drew the second Forest, and the Aven whacked away for three per turn. Doran went straight to seven mana and brought out Aven Fateshaper, and Cunningham was sent packing.

Cunningham sided in a Headhunter because he was going first, and wouldn't mind getting a quick hit in for a free card. 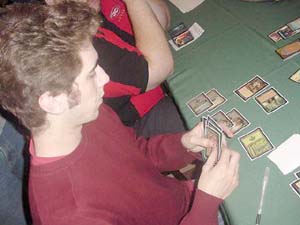 Both players had two-drops in the critical third game: Jeff a Shepherd of Rot and Shaun a Glory Seeker. Jeff put out a Frightshroud Courier on turn three, but paused when Shaun played a morph. If it was the Angel, Jeff had no answer.

Jeff attacked and dropped a Screeching Buzzard. Shaun played his second plains, but didn't morph his guy. Instead, he just attacked with Glory Seeker (bluffing Daru Healer) and cast Gustcloak Skirmisher. Jeff had a Swat ready for that bad boy, but had no more land, so he had to take a turn off from playing creatures.

Jeff was keeping both life totals low with his Shepherd, so when Shaun's morph finally got through and revealed itself to be that beating of a Wall—Crude Rampart—it really stung.

Jeff took it like a man, however, and played another Buzzard to continue owning the air.

Doran had to find answers for the fliers soon, since he morphed his wall and lost his Seeker in a trade, he was just about out of offense. He cycled a Backslide and found Ascending Aven, but that wasn't going to be enough.

Jeff attacked, and the death of one Buzzard forced Shaun to discard his last card, Riptide Replicator. Shaun found no answer to the other Buzzard, Jeff activated the Shepherd again, and attacked for the win!

After the match, one of Doran's friends joked that he lost on purpose so that he wouldn't have to quit his job.

Trust me; winning a GP is no reason to quit your day job. Now getting on the Masters... hmmm.....