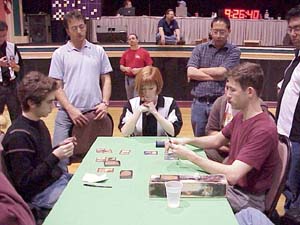 Sol Malka vs. Jeff Cunningham Sol Malka's pet deck won a Grand Prix earlier this season and on Sunday Malka went for a Grand Prix win of his own. The self-appointed "People's Champion," who grew up in Florida and felt he was defending the honor not just of the southeast, but of the entire country, took on the quiet Canadian Jeff Cunningham, who just doesn't seem to lose anymore. After putting up a Top 8 at the most recent Pro Tour, Cunningham then took a month off of school to work on his Magic game as a participant in the Magic Colony. The Colony already had a decent tournament (claiming 10th, 11th, 12th, and 28th in addition to Cunningham), but I'm sure they would love their first title. The matchup pitted Cunningham's aggressive red-green deck against Malka's aggressive red-black. Both players put a large emphasis on acquiring cheap creatures and nice mana curves.

Cunningham came out faster, with Spellbane Centaur and Anurid Scavenger beating down while Fiery Temper removed Malka's first blocker and Acceptable Losses removed Pardic Collaborator (plus fed two more cards to the Scavenger). However, Malka quickly got a pair of Barbarian Outcasts into play, which made attacking much less appealing, and then Gravedigger got back the Collaborator. Chainflinger made Cunningham's life even more difficult and mostly Malka's creatures just seemed a lot better than Cunningham's. Faceless Butcher deprived Cunningham of his best blocker – a Pitchstone Wall – and suddenly it was all over but the chump-blocking. 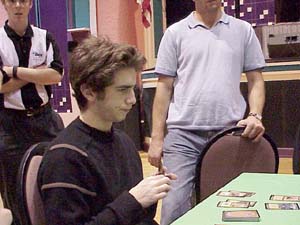 Jeff Cunningham It took Cunningham three cards, but he built a very impressive monster early in game 2 by playing Minotaur Explorer and then enchanting it with Crackling Club. Seton's Scout also came down on turn 3 and then Pardic Firecat followed on turn 4. Malka just shook his head – he thought his draw was fast with Crypt Creeper and Barbarian Lunatic, but it wasn't nearly that fast. Malka's turn 4 Mesmeric Fiend was too late to take any spells out of Cunningham's draw – his last card was a land. Malka was also able to play Barbarian Outcast on his fourth turn and he then traded all three of his creatures for the 4/3 Minotaur. Malka then managed to remove Cunningham's Firecat with Firebolt plus Barbarian Ring, but when Malka went to flashback his Firebolt to remove Cunningham's newest threat – a Werebear – he ran into Rites of Initiation as a response, giving Cunningham threshold, a 4/4 Werebear, and the win.

Malka didn't think Cunningham could start quite that aggressively again and Malka felt the matchup was about card advantage so he forced Cunningham to play first in game 3. Cunningham then had to mulligan if the game came down to card advantage, Malka was starting with a sizable advantage. 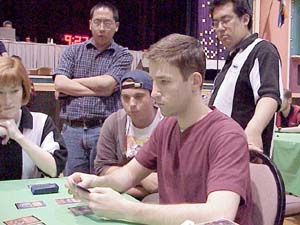 Sol MalkaGame 3 started slowly, but with Malka wincing on turn 4 as Cunningham used Refresh to save his Cartographer from combat with a Lunatic. Malka then played out Chainflinger and Pardic Collaborator, which pretty much locked up the ground war for however long Malka wanted to play defense. Cunningham's draw was pretty crazy: 11 lands, a Pitchstone Wall, a Refresh, and three real creatures (Cartographer, Minotaur Explorer, and Krosan Archer). Malka started attacking with his Collaborator as soon as he drew his second one. In addition to Cunningham's weak draw, Malka was winning because he set himself up well for Torment. By getting into red-black, he was able to take advantage of being passed double Outcast, double Collaborator.

Cunningham calmly played out the creatures that he finally started to draw, and he managed to kill one Collaborator with Acceptable Losses, but Malka just kept sending over the other Collaborator. Relentlessly it gobbled up a chump-blocker every turn as Cunningham looked over at six very threatening swamps. Cunningham eventually drew into Bomb Squad, but by then he was way too far behind. One all-out attack from Malka was all it took for Cunningham to extend his hand.