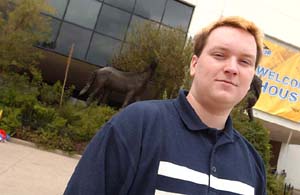 A member of team Punisher, Jens Thoren has been on fire throughout the last Pro Tour season. His pair of Pro Tour top 8 finishes combined with a number of other strong finishes earned him second place in the Player of the Year race. Thoren started off this year by winning the prestigious Magic Invitational over teammate Tomi Walamies. Having experienced success on both of those circuits, Thoren is now after a Masters championship title. He drafted a powerful red-black deck with plenty of rare bombs, certainly capable of winning the draft.

Gary Wise is Sideboard's resident limited specialist. He drafts more than almost anyone on the planet and so had plenty of practice for this event. Wise has had a string of solid tournament finishes over the years and his career has only been getting better since he moved to England to play with Ben Ronaldson and John Ormerod. His stay in England culminated in a top 4 finish at PT Boston where he teamed up with Bob Maher and Neil Reeves. Now back in Canada, Wise has not lost any of his drafting skills, as apparent by him sitting at this table. Very recently, Wise wrote an article defending the viability of drafting blue in this format. His blue-white tempo deck certainly supports that theory as it carried him into the finals.

Both players are looking for their first Masters win in what is sure to be a very aggressive, fast paced matchup.

First game of this best-of-three series began poorly for Wise. Not only did he have to mulligan down to six cards, but Thoren had a lightning fast draw with a turn 1 Goblin Sledder followed by a turn two Shepherd of Rot. Wise stopped his opponent from attacking by morphing a creature on turn three, but Thoren trumped his play with Nantuko Husk.

Wise failed to play a fourth land and had no source of white mana. Thoren hurried to take advantage, activating Shepherd of Rot for two points at the end of Wise's turn, then coming through with Nantuko Husk for two more points. Thoren beat Wise down to eleven life points, then summoned Tephraderm. Wise played a fourth Island but still lacked white mana. In his next main phase, Thoren activated the Shepherd, attacked with Husk and Trphraderm, sacrificed his two smaller creatures to the Husk and then cast Starstorm for two to prevent Wise from being able to block.

"Well, that was disheartening," Wise commented as he picked up his cards.

Unphased, Wise attacked again and summoned a Mistform Shrieker. Thoren cast Crown of Suspicion on it and sacrificed it to make it 4/2 and kill Mistform Dreamer. Wise was tapped out and could not change their creature types in response. Thoren then attacked with Skirk Commando, forcing Wise to make the trade, and finally morphed another creature. Wise morphed a creature of his own and blocked Thoren's. Thoren tapped out to unveil Skittish Valesk. Really down on the card economy, Wise summoned a Goretusk Harrier, really hoping he would win the coin flip. He did not, and Valesk brought him down to ten life. Thoren then went on to morph two more creatures, down to one card in hand. 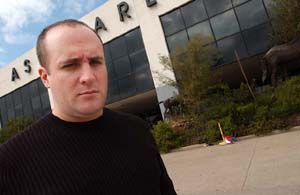 Wise enchanted the Harrier with Crown of Awe – certainly a good card against Thoren's black and red creatures. Wise attacked with his creature, representing Inspirit. Thoren lost the coin flip so Valesk got flipped back down, and attacked with his entire team. Wise cast his Inspirit and spent some time trying to choose which surprise monster to block. He chose one of the unknowns and had Thoren morph the Valesk on him, dealing eight points of damage. Although Thoren lost a Haunted Cadaver in the exchange, he now had Wise down to one life point, with a tapped Shepherd of Rot in play.

Oblation on Crown of Awe let Wise draw two more cards and he tapped out to summon another creature. Thoren did not wait to draw his card – he activated Shepherd of Rot to end the match.