Teammates. Roommates. And two of the best players European Magic has to offer. The reserved Thoren and the more electric Walamies were heavy favorites to do well this weekend, going into the event, and they did not disappoint. Now they will fight each other for the right to design a card, one of the games highest honors (Jon Finkel also at 10-5 lost the head-to-head tiebreaker with both Thoren and Walamies). 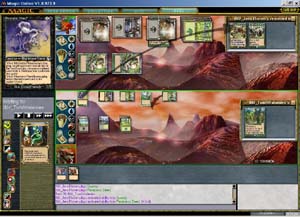 (click to open full-size in a new window)The first match would be Online Extended, with Walamies's black-green control deck facing off against Thoren's more beatdown-minded version.

Walamies mulled, and a Duress from Thoren revealed his secrets: Two Duresses, a Mesmeric Fiend and Haunting Echoes. Thoren took Echoes, then had his hand stripped. He lost Call to Duress, then his Beast Attack was stranded by the Fiend. Another Fiend followed, and stole a topdecked Spiritmonger. Thoren flashed back his call.

Walamies Living Wished for Phantom Centaur, but was stuck on just three land. Thoren had plenty to spare. A Walamies Duress missed, and Thoren topdecked one to return the favor. It caught another Echoes. As Walamies found his fourth land for the Phantom Centaur, Thoren started picking up speed.

Another Call gave him two more elephants, and the following turn he started swinging. That was followed by Squirrel Nest, and soon Walamies was under five. He had another Centaur, but Thoren was ready with Pernicious Deed. He cleared the board and got back Spiritmonger and Beast Attack. Walamies flailed for survival, but was at one life without an answer to the 'Monger. He played Phyrexian Arena, and Thoren allowed him an honorable death.

Thoren mulliganed a terrible two-forest hand for Game 2, and his six were a lot better. Both players led with mana-acceleration, but Walamies had gone first, and had Slay for Thoren's Elf. He was without a third land. He did have a Mesmeric Fiend to steal Phantom Centaur. He waited as Walamies Living Wished for swamp. It turned out he didn't need it. He had forest and swamp. 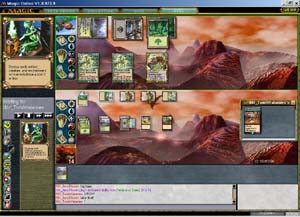 (click to open full-size in a new window)Thoren got a little good luck of his own, though. He topdecked a land for his Call, and another for his Centaurs. Pity that Walamies's next plays were back-to-back Spiritmongers, with Llanowar Wastes ready for color-switching. He beat Thoren to one and Living Wished for Laquatus's Champion, readying it for the following turn. Engineered Plague on Nightmares freed up his Phantom Centaur.

But Thoren wasn't out of it. He topdecked Mesmeric Fiend, strangling the Champ forever, and then played Birds, getting ready to play Spiritmonger. His Centaurs blocked the Mongers without beefing them up, and he got one of his own. He readied his Monger. He drew Perncious Deed.

"I'm actually going to win this game... if he doesn't have anything else." - Jens Thoren

This last he said in response to a Phyrexian Arena from Walamies. An Elf in hand meant he could chump the incoming attack, with his 3-1 Centaurs, a 7/7 Monger, and one point of Arena damage totalled fourteen. Sure enough, Walamies had nothing in hand, and when the Deed came down he realized what was happening.

Thoren actually giggled as he came across for the kill.