With Jens Thoren already up a match, Tomi "Jelly" Walamies was a little more serious. He was piloting an updated version of Team Punisher's blue-white beatdown deck from OBC. Lest we forget, both Walamies and Thoren are part of the core of Punisher. This version employs Osnlaught's Weathered Wayfarer, sac-lands, and Whipcorder, as well as the brutal power of Opposition. Thoren is with Cunning Wish Wake, another OBC deck brought forward. He hedged his bets on this one, including only lands in the mix.

Both players kept their opening hands. Walamies led with Patrol Hound, and facing forest and plains, though hard about his next move. He chose to pitch Deep Analysis and find two cards, then played Spurnmage Advocate. Thoren played Lonely Sandbar, and passed it back.

Walamies was looking at a grip of Opposition, Divine Sacrament, Quiet Speculation and Patrol Hound. He busted out the Opposition, going for the throat. He swung for two and then locked Thoren's blue mana. He responded with Cunning Wish for Ray of Revelation. Decidedly non-optimal. 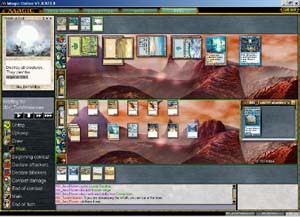 (click to open full-size in a new window)Walamies frowned at his fifth turn. He Speculated for Deep Analysis and two Screeches. He made some birds and passed it back. He tapped some lands, and of course Thoren busted out the Ray. He had two mana left at the end of his turn. Walamies smashed in, and Thoren played Moment's Peace. That freed Walamies to Analyze again.

Thoren dropped Compulsion leaving mana up for Moment's Peace. He needed lands. Walamies dropped a pair of Sacraments and swung in. Thoren Fogged. He ripped a second one. He played it when Walamies attacked, but having dug for a land on his turn, he didn't have mana free to stop Opposition. Weathered Wayfarer showed up on Walamies's side. It locked Thoren's green mana. He cycled through with Compulsion.

"If you are slowplaying the Wrath, you are out of the team." - Tomi Walamies.

He wasn't. He turned up nothing, and died to lethal combat damage.

Walamies started with Tireless Tribe, and then tried a Weathered Wayfarer. Thoren got his Memory Lapse on. Despite being able to Logic for one, thanks to Flooded Strand, Walamies chose to let Thoren have the tempo. Thoren laid Krosan Verge, and they did the same dance again the following turn. Walamies Speculated for Analyses and a Screech. 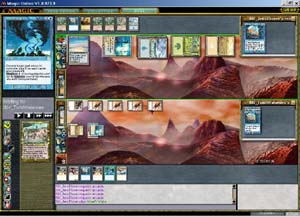 (click to open full-size in a new window)
Then Thoren missed his third land drop. Walamies was also tight on land, and forced Deep Analysis past Circular Logic with one of his own. Thoren ripped an island and tapped out for Deep Analysis. Walamies came back with double-Screech action.

When Thoren's next turn was to flash back the Analysis, Walamies's mood brightened. He flashed back and Analysis of his own, netting another Logic, and swung for five. Thoren stood at just nine life. He Verged at end of turn. He needed a big play. It was Mirari's Wake.

"I will think for an hour." - Tomi Walamies

Indeed it wasn't. Thoren's had all four Brushhoppers in hand, and nothing besides. Walamies let the Wake resolve, and then watched as Thoren tapped out for Deep Analysis, conceding the match.

Final Result: Tomi Walamies defeats Jens Thoren 2-0 to even the finals at 1-1