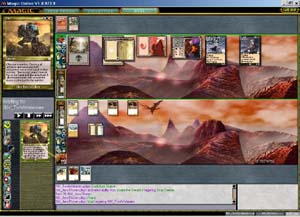 (click to open full-size in a new window)Things started off well for Thoren, with three land in his opening grip. At five cards, nothing is more prevalent than manascrew. He found a mountain before long, having Vindicated Walamies's lone plains. Walamies had another one, and was beating with Grim Lavamancer and Gustcloak Runner.

Though he mana stumbled, Thoren's deck was kind while Walamies's was not. Just a Glory Seeker joined the opposition before Thoren Voided for one. He saw a hand pakced with three casting-cost guys. The following turn, turn eight mind you, he came down with Visara the Dreadful.

Sengir Vampire followed while Walamies made more terrible creatures. Void for three teammed up with Gerrard's Verdict to leave Walamies with nothing but a pair of Runners on the table. Thoren wisely chose to bash for nine. Another turn, and the first game was his.

Thoren couldn't hold back a snort when he saw his opening five: , swamp, plains, Gerrard's Verdict and Vindicate. Next to him, Brian Davis announced "This is it, that's the Invitational!"

It was even more ridiculous when he drew the second Verdict. Vindicate left him with one card in hand, and just mountain and Grim Lavamancer. Thoren held Visara.

One made an appearance. Walamies had another Lavamancer, as well as a second mountain. They started to bust Thoren up. He begged for another mountain, and finally, one came.

But he wasn't out of the woods yet. Two Lavamancer activations put him at 7. Walamies had found a plains, and then another for Gustcloak Skirmisher. A dying Lavamancer brought Thoren to five. Then came Glorious Anthem. Thoren drew Vengeful Dreams and considered attacking, but thought better of it and held back.

Walamies made an ambitious play. He swung in with his 3/3 Skirmisher, and Thoren blocked. Rather than activating his Visara, he chose to kill the Skirmisher with damage, forgetting about the inevitable Goblin Legionnaire. Sure enough, Walamies had one, and suddenly things were a lot trickier.

Glory Seeker was answered by Vengeful Dreams, and while Walamies drew a land, Thoren topdecked a second Visara. He even had Vindicate ready for the one card he feared: Goblin Trenches. Gustcloak Savior was far from threatening. Thoren showed it up with Sengir Vampire. Walamies sent a second Legionnaire to the dome, leaving Thoren at three. 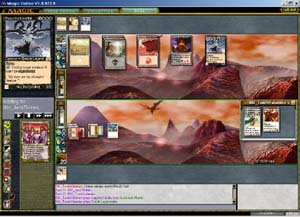 (click to open full-size in a new window)The next turn, he attacked. Walamies blinked, and blocked with his 4/5 Savior.

Now, you can't fault a man for not knowing the new cards. He Visara'd the big man and Volcanic Hammered the last goblin token. Walamies drew yet another Legionnaire.

"If I hadn't blocked, I would have died!" - Jens Thoren

It was true, if Walamies had sent the first one to the dome, he would have killed Thoren by this point. It was dicey for a moment, another Legionnare would win it, but it wasn't forthcoming.

"Congratulations.... but for this, I get the window seat." - Tomi Walamies