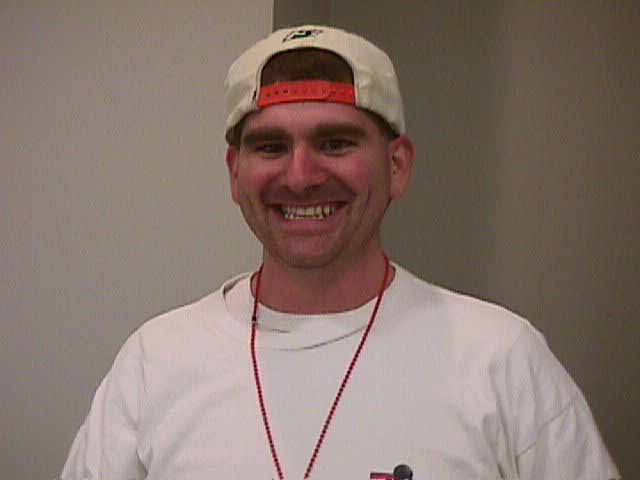 Unlike the previous Top 8 matches, the finals match was the best 3 out of 5 games. Its a grueling match but well worth it, as the winner would win Magic for Life, while the loser would win only Magic for a Year just like the rest of the top 8 finishers. John Stevens was playing his red/green mana denial Blastoderm deck and his opponent, Matt Idoux, was playing a blue control deck with Thieving Magpies. This match is a difficult one to predict. In the past, blue has typically been strong against red/green decks with expensive threats, but the mana denial would certainly hurt the control deck. In the Top 8 of US Nationals, when Aaron Forsythe, with his Angry Hermit deck, played against Mike Long, playing blue control, Aaron handily defeated him, knocking Long off of the US Nationals team. These two decks in the finals are different enough, though, that there is no telling what will happen.

John won the die roll and chose to play first. John Stevens began by playing a Rishadan Port and then a Mountain, but he failed to draw any land and he was forced to discard a Rofellos, Llanowar Emissary and a Masticore. Matthew had mana problems of his own, but not quite as severe, playing an Island and three consecutive Rishadan Ports. When Matthew finally drew a second Island, he played a Thieving Magpie from this hand, just in time for John to top deck a third land and cast Arc Lightning to kill it. Both players seemed to recover from their mana problems, although Matthew helped himself by casting Treachery on two of John's Birds of Paradise. John finally began casting threats, attempting to cast two Avalanche Riders, two Tangle Wires, a Plow Under, and a Masticore over the course of four turns, all of which were countered by Matthew. Finally, Matthew Idoux cast a Morphling and John was unable to prevent it from killing him. 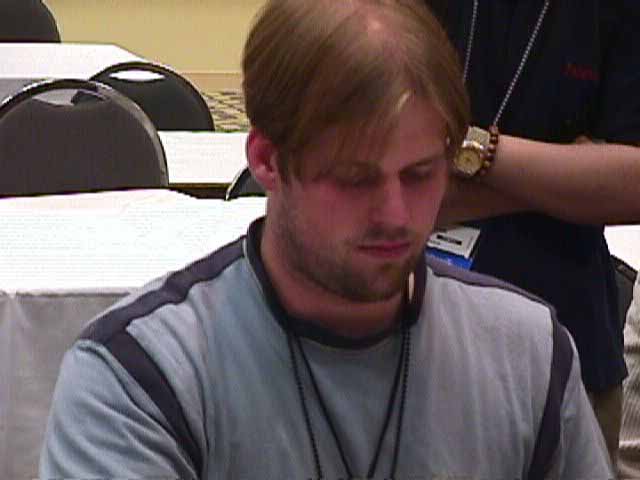 John chose to play first again this game and his draw seemed significantly better. He led with a Forest and then a Rishadan Port, followed by another Forest and a Yavimaya Elder. Matthew responded by playing three Islands and a Powder Keg and John took that opportunity to cast a Tangle Wire. Matthew was in a bad position, with a threat on the board and Tangle Wire preventing him from casting any more spells. Still, Matthew was able to Foil John's next spell, an Avalanche Riders, by paying the alternative casting cost. Matthew finally got up to four mana and attempting to cast a Thieving Magpie, his goal was undoubtedly to recoup some of the lost cards from his earlier Foil. John would have none of that, however, as he cast Arc Lightning to kill the Magpie. On John's next turn, he attempted to cast a Blastoderm which was stopped by Matthew's Counterspell, but John was able to cast an Avalanche Rider on the following turn and attack, bringing Idoux's life total down to 8. Matthew played the last card from his hand, a Morphling and John replied with a Masticore. Over the next two turns, John was able to reduce Matthew's life total to 4, forcing Matthew to block the Masticore with his Morphling for the rest of the game. During one such blocking attempt, Idoux made a mistake and didn't make the Morphling untargetable before the 1/5 Morphling blocked the 4/4 Masticore and thanks to the use of Rishadan Port during Matthew's previous upkeep, John was able to tap out and shoot the Morphling to death. Matthew sacrificed his Powder Keg to kill the Masticore on his next turn and the game was stabilized with John at 15 and Matthew at 4. John soon cast a Rofellos, which was Treacheried by Matthew; John was then forced to Arc Lightning the elf and Matt, bringing him down to 2 life. John then had his Avalanche Riders Thwarted and Matthew finally drew a threat, a Masticore, which he cast on his turn. John played both a Blastoderm and a Yavimaya Elder and in the confusion of the next turns upkeep with Rishadan Ports, shooting of the Yavimaya Elder, sacrificing of the Yavimaya Elder to draw cards, Matthew forgot to pay Masticore's upkeep and died to the Blastoderm.

Matthew Idoux seemed a bit rattled by his play errors of the previous game, but he pulled himself together and chose to play first. John Stevens got off to a fast start, attempting to cast a third turn Avalanche Riders and a four turn Plow Under, which Matthew was forced to Counterspell and Rethink, respectively. Matthew then attempted to take the offensive with a Thieving Magpie, but John had the Arc Lightning in hand for it. Matthew, apparently out of countermagic, tapped two land to cast a Powder Keg and John took the opportunity to cast a Boil, destroying Matt's three Islands, leaving him only with a Rishadan Port. Stevens followed that up with a Blastoderm, which quickly knocked Matthew's life total down to 5 and cast a Yavimaya Elders and a Viashino Heretic to finish the job. 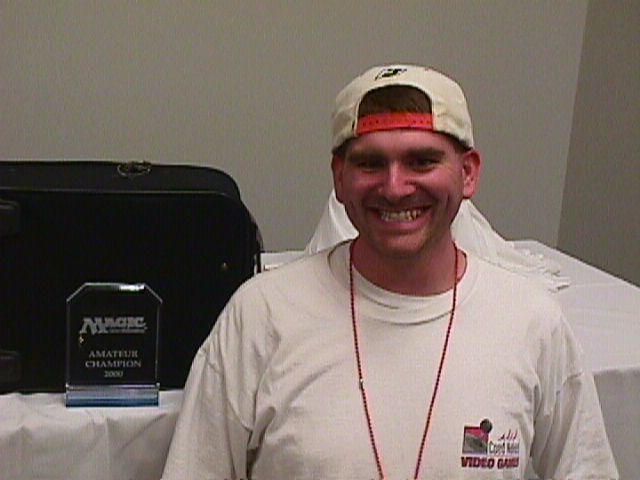 Matt chose to play first again this game and began with a series of Islands and a Rishadan Port. John got an aggressive draw, attempting to cast a Rofellos, Llanowar Emissary which drew a Rethink from Idoux. John then attempted to cast an Avalanche Rider, followed by a Plow Under, followed by a Tangle Wire, all of which were countered by Matt. Finally, John got enough mana to be able to tap Matt's Rishadan Port with his own and then attack with Treetop Village each turn. Over three turns, he was able to get Matt down to 11 life until Matt played a sixth land and cast a Masticore. Once Masticore was in play, John Stevens saw the opportunity to gain card advantage with Matt having to pay the Masticore's upkeep and cards like Plow Under becoming even more outstanding. Following a Plow Under, which resolved, and a Viashino Heretic, which drew a counter out of Matthew's hand, John Stevens played a Masticore and had enough mana to shoot Matthew's Masticore four times and attack with his own. Matthew tried to get out of his Masticore lock by playing a Thieving Magpie, but John had the Arc Lightning once again and cast a Blastoderm to accompany his Masticore for the kill.