Nathon Braymore and Josh Rider are more used to sitting across from each other at a PTQ. Neither expected to be playing on Sunday. As if there wasn't enough pressure already, the Champion and Finalist trophies were brought to the table to show the players what they were fighting for.

"I have a feeling I'm going to wake up tomorrow and not believe what I've done." – Josh Rider 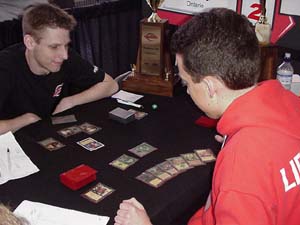 Braymore had to mulligan a landless first hand, but kept his six. Rider led with Llanowar Elves that bought it to Smother. Braymore's third land was a Cabal Coffers, showing the quality of his draw was poor, and he got on the board with Nantuko Shade. Rider had an Oversold Cemetery, and then picked apart Braymore's hand with Wirewood Herald and Cabal Therapy after Braymore failed to draw a land. Rider hit with his blind guess of Diabolic Tutor, then stole Skeletal Scrying, leaving Braymore with just Corrupt in hand.

Rider made a Wirewood Herald, and then Living Wished for Braids. He played a second Herald and announced a Cabal Therapy. Braymore Smothered one of the Heralds in response, and Rider called for Chainer's Edict. It was a hit. Braids hit play without incident.

The two spent their time sideboarding reminiscing about the times they've played each other. Rider's favorite involved smashing Braymore in an IBC qualifier with Domain.

Braymore led with Duress in the second game. 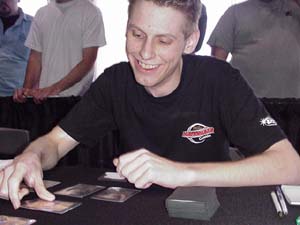 "You weren't supposed to do that." – Josh Rider

"I warn you, you may be wrecked by spells on turns two through six." – Josh Rider

Meanwhile a raucous Mark Zajdner had to be asked to leave the finals area.

Rider swung in with Braids and Elf regardless, and Braymore decided to trade the Gladiator for Braids. Rider played out a second Elf and flashed the last card in his hand.

It was another Braids. Braymore passed his turn and Rider could only shrug as he put Phantom Centaur on the table.

Braymore led with Withered Wretch, but his third land drop was a Cabal Coffers.

"You've been doing that a lot." – Josh Rider

"I hate that card." – Nathon Braymore 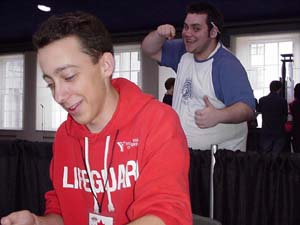 He smothered the Herald in response. Rider fetched a replacement. He then named Visara the Dreadful, and scored. Braymore was left with two Mutilates and an Echoes. He naturally flashed it back to catch the Echoes, since his Cemetery would give him a long game advantage. He played the other Herald.

Braymore, unsurprisingly, had nothing to do. Rider made another Cemetery. Braymore passed again. Rider found a fourth land and put down the Braids. Braymore Mutilated, but it was clearly a losing battle. Rider fetched a Caller with his Herald, then got back Braids with the Cemetery, putting her into play. Braymore Mutilated again, but was still losing ground. Rider added to the beats with Baloth, and soon Braymore was conceding, unable to escape Braids.