Eric James is playing in his second tournament since retiring to play poker a few years ago. In the last tournament he played in before his hiatus, he made Top 8 at GP San Diego. Justin Gary is no stranger to the spotlight having numerous Top 8 GP and PT appearances. 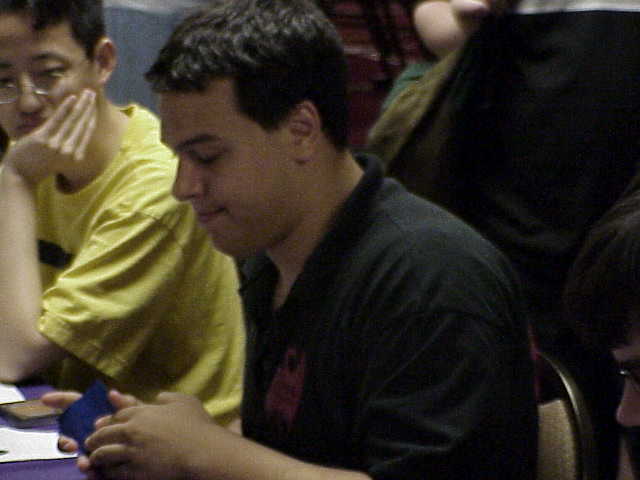 Justin looked at his hand and decided to mulligan a six land, Mindslicer draw. He took the forbidden look and it revealed good cards such as Sengir Vampire and Faceless Butcher. His new hand was better, with two lands and many spells. Eric started off by playing Cabal Therapy naming Faceless Butcher. He missed and saw lots of good spells including Violent Eruption. Eric then played an Ironshell Beetle but it was held back by Justin's Rotting Giant, which was played by sacking a Shadowblood Egg. Justin missed his land drop and passed the turn. Eric then went aggressive and Butchered the Rotting Giant, bringing Justin to 18. Justin drew no lands, and on the next turn Eric attacked for four and played Fledgling Imp. Justin did not draw a land, but he did draw a Fiery Temper, which he was able to discard and kill the Faceless Butcher with madness. Eric then attacked with both his creatures, losing the Imp to the Rotting Giant. Eric attempted to flashback the Cabal Therapy, naming "Volcanic Eruption". Unfortunately, he named the card incorrectly, as it is "Violent Eruption". Eric shrugged and played a Carrion Wurm. Justin continued his trend of not playing lands and Eric's Soul Scourge finished him off the next turn.

Justin made Eric go first, and he lead off with a Cabal Therapy naming Faceless Butcher. Once again, he missed. Then, Eric played a Fledgling Imp. Justin responded with an Ember Beast. The Imp brought Justin down to eighteen, and then it was sacrificed to the Therapy to take a Chainflinger from his hand. Justin had the answer and he spent a turn Stitching Together the Chainflinger. Eric who was still playing mono-black at this point played a Dusk Imp, which was Lava Darted immediately. The Chainflinger came out again. Justin was able to finally draw a forest and he played a Whispering Shade, which was quite deadly with his six swamps. Once again, Justin had the answer and he Butchered the Whispering Shade, attacking Eric down to fifteen in the process. Eric could only play a Phantom Tiger. Justin attacked with his Butcher and Ember Beast, and when Eric blocked the Butcher with his Phantom Tiger, Justin pinged the Tiger before damage to save his Butcher and to kill Tiger. Justin then played a Giant Warthog, and Eric had no answer and packed up his cards.

Game three was as exciting as game one. Justin kept a two land hand. Eric once again cast Cabal Therapy naming Faceless Butcher, and he finally got it! Eric then played a Cabal Torturer as Justin missed his next land drop. Justin took one from the Torturer and finally drew a land, and Afflicted the Torturer. Eric responded with a Rabid Elephant the next turn. Justin, wanting to protect his Grotesque Hybrid, played a Pitchstone Wall. Eric played an Ironshell Beetle and the counter was placed on the Rabid Elephant. Then the Therapy was flashed back, and the Pitchstone Wall was sacrificed to return the Hybrid back. Justin then went to sixteen, and Justin played a Treacherous Werewolf. The next two creatures that Justin played (Hybrid, and Sengir Vampire) were Butchered by Eric giving Team Jokas their first Win.