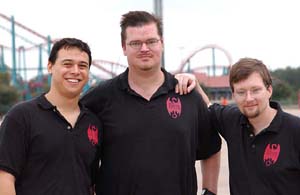 With Justin Gary's victory over John Larkin, it guaranteed an all-YMG finals. It turned out he would face Rob Dougherty and his mono-black Reanimator. He was confident his Cogniv-Oath would be up to the task. That's the thing about Justin Gary, he's always confident. Dougherty, veteran of countless Top 8's, was much more laid-back about the whole affair.

Gary was very happy with his opening hand. Dougherty didn't bother to play coy about how terrible his was. He sent it back, and then back again.

Gary started with island, and hid Counterspell and Cognivore with Brainstorm in response to a Duress. He wanted to get the most out of his Polluted Delta. He lost Fact or Fiction, keeping Accumulated Knowledge and Pernicious Deed. Next turn he played the Delta and passed it back. Dougherty had another Duress to strip the Counterspell. Gary Accumulated and untapped.

He pulled an Oath and made Treetop Village. Rob finally played his second land, a City of Traitors and tried for Last Rites.

"You know that's more card disadvantage for you if that resolves. Fortunately for you ..." - Justin Gary

He plunked down Force Spike. Oath of Druids resolved shortly after. He had three Treetop Villages and started to attack with one. He drew Fact or Fiction and held back at turn, the reason for which was clear to Dougherty. The split offered was Forbid or two lands, Accumulated Knowledge and Oath of Druids. Gary simply could not resist going up five cards. The Knowledge even gave him Counterspell. Then he untapped and drew a second one.

Finally Dougherty had some action. Cabal Therapy targetting himself resolved, and Phantom Nishoba hit the graveyard while showing Gary a hand of Exhume, City of Traitors and two Reanimates. Dougherty laid the City and tried Exhume. It was countered. He Reanimated and fell to four. Then he burned for one from his extra City mana.

Gary confirmed with Head Judge Rune Horvik that the Nishoba's Spirit Link wouldn't get a chance to resolve if lethal damage was being dealt. Dougherty urgently whispered "Change the rules!", but Horvik was unmoved. Gary swung across for the win.

A turn-one Therapy for Oath hit, seeing island, Polluted Delta, along with Brainstorm, Cognivore, Force Spike, and Powder Keg. Gary played an island and passed it back. Dougherty played a swamp, but didn't cast anything. Gary thought before Brainstorming at the end of Dougherty's turn.

He set himself up a Polluted Delta. Dougherty Entombed at end of turn. Gary allowed it. Dougherty fetched himself a Nether Spirit. He used it to flash back Cabal Therapy on his turn. Gary let it happen. Dougherty called for Powder Keg and hit, but saw Force Spike, Forbid, Intuition, Counterspell and two land.

He had another Therapy in hand. Gary popped his Delta and Counterspelled. That was all. Gary played another Delta and turned it over. Dougherty tried Vampiric Tutor. It resolved and got him still another Cabal Therapy. He Therapied twice on his next turn, stealing away the Intuition and Forbid.

He needed to. After drawing Cognivore he watched Dougherty drop Phyrexian Negator with swamp up to dodge Force Spike. Gary drew his Oath of Druids, but no green mana to get it into play. He scooped. 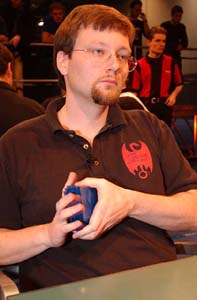 Gary kicked off Game 3 with island, go. Dougherty's swamp, go was just as impressive. However, he was glad to see no turn-two Oath hit the table. Gary had an Accumulated Knowledge at end of turn, then tapped out for Pernicious Deed. Dougherty's Phyrexian Negator got ready to force it off the table. He had one mana open after stopping the incoming Negator, but Dougherty could not, or chose not to take advantage.

His next play was a Nether Spirit. Gary Living Wished for Palinchron. He countered Dougherty's next play of Exhume with Krosan Reclamation. Then he dropped Oath of Druids and countered a Phyrexian Negator that threatened to join the Spirit. Gary Oathed up Cognivore. Brainstorm hid Force Spike and Palinchron from Duress, and Dougherty took Living Wish over Counterspell. The Spirit swung in and Gary fell to four. Then three thanks to Detla'ing away his bad cards. The next attack Gary decided to block. Now Dougherty had no play. The Treetop and Cognivore brought him to ten. Dougherty Oathed up Negator, but in the process increased the Cognivore to 9/9. He passed the turn.

Gary held back also, with a hand of Force Spike and Counterspell. Dougherty made no move, and Gary pulled up Pernicious Deed. He played it and Spiked it to get his Cognivore to 10/10. Dougherty had Diabolic Edict, but all Gary had to do was turn on his Village and sacrifice it. He flew over for the win.

"We shall see." - Rob Dougherty

This last was said to announce the Duress he played. Gary turned over a hand of double-Oath, Accumulated Knowledge, Intuition, Treetop Village and Yavimaya Coast.

He thought for a long time before taking an Oath, signalling his lack of Cabal Therapy. When his next turn consisted of swamp, go, Gary was ecstatic.

"I appreciate you throwing me a bone like this. You know, you've got more Pro Tour Top 8's than me, you've got a wife and kid and this whole new life now. Me?" - Justin Gary

Gary was given the go-ahead and went frantic with excitement. He tore the top card off his deck, slammed his second land into play so fast they both spun, and threw down the Oath. Dougherty calmly cast Entomb at end of turn. It put Visara the Dreadful into the graveyard, and she was soon put to work thanks to Exhume. Gary's celebrations were cut somewhat short.

He did not Oath on his turn. He took five from Visara and then Intuitioned for Accumulated Knowledges. He took five more and cast one, then the other, looking for black mana to enable his Pernicious Deed. None came. He Oathed up Palinchron. Staring at a hand of ten cards, he looked for a plan.

He untapped and Oathed. Palinchron was the first card off his deck. Right behind it in the draw step was the Polluted Delta he needed. Down came the Deed. Dougherty held back on his Pit Fighter, then destroyed on Gary's turn. Gary started to Oath. At first, he was thrilled with the tide of instants, but soon he just wanted to hit a creature. He found Palinchron with just four cards left in his library.

Dougherty took the opportunity to Butcher the big creature. Gary busted out another Deed. He Deeded on the following turn with just one mana left.

"Shame Palinchron doesn't work the way it used to."

Dougherty Edicted, and played a Negator. Gary untapped and looked at his two-card library. He reviewed his graveyard to see what help Krosan Reclamation could be.

It was Counterspell. Cognivore was the very last card in Gary's library. Dougherty swung in with Negator and failed to forget to trample over Treetop Village.

Neither player budged for a turn, when Dougherty Tutored up Entomb, untapped, and then Cabal Therapied away Accumulated Knowledge from Gary while seeing Palinchron and Living Wish. Gary did nothing with his next turn, and Dougherty Entombed Nether Spirit. That let Dougherty get rid of Living Wish. 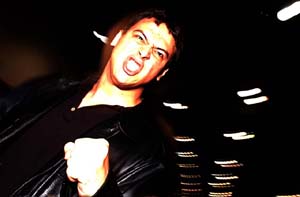 Again, Gary drew a land. Dougherty didn't have anything to do with his Spirit so he left it in the graveyard. Both players drew and played lands. Gary hit seven. He tapped out for Palinchron. With its come into play ability on the stack Dougherty Edicted it. He Edicted Gary's incoming Treetop Village for good measure.

However, he had no play. Gary drew Pernicious Deed and put it into play. Again Dougherty had no play. A pair of Accumulated Knowledges gave him just three Oaths, Krosan Reclamation and land. That was made apparent by a Dougherty Therapy on Counterspell.

"Look at that grip." - Justin Gary

Dougherty made a note of his bad cards and they continued to play Draw-Go. After two turns Dougherty brought back the Spirit. Gary let him draw, then Reclaimed the Cabal Therapy and Entomb in Dougherty's graveyard. Dougherty had another already in hand. Gary responded with Accumulated Knowledge for four, drawing two land, Cognivore and Counterspell. Gary thought hard before letting it resolve.

Dougherty went for the Oaths. He was two Force Spikes as well as the lands, Cognivore and the Counterspell. He tried to flash it back and earned the Counterspell. The Duress in his hand would have been no better, since Gary could just return the Cabal Therapy to his library with Reclamation in response.

He untapped and drew Treetop Village, much to Dougherty's dismay. The next turn he cast Cognivore while still having enough mana to protect himself from Edict by turning on the Village. Palinchron joined his squad with Dougherty at fifteen. He swung in for sixteen on the next turn, and activated his Village when Dougherty played Edict. Dougherty smiled and extended the hand.