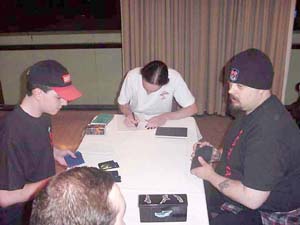 After much waiting and angst we are down to the last 2 players who vie for the title the 2002 Magic The Gathering Australian National Champion. Both Victorians, Justin West has steered his way to the final with a Black/White Braids deck he calls "Ninja", although it should be noted that his whole team called their respective decks "Ninja", regardless of what was in the actual deck.

Dante Rosati's team had the flipside to the "Ninja" deck theme – his "Union Jack" deck was exactly the same as Tom Haddy's and Jarron Puszet's "Trench-Go" and only differed to Rob Nadebaum's "Edge's Trenches" by 1 sideboard card. Same deck, different names.

Dante won the toss and decided to play, then mulliganing his opening hand of 1 land. His second draw was no better, again 1 land so it would be a double mulligan. A tough decision followed, as his third hand contained no land at all. He decided to go with it, saying done without dropping a land. Curiosity isn't one of Justin "Bomber" West's strong points so a first turn Duress saw a hand of 2 Counterspells, 1 Absorb, 1 Prophetic Bolt and a Fire/Ice, taking the later as it drew a card. Dante drew a Teferi's Moat, which looked very un-landlike. Justin then cast a Spectral Lynx. Dante again failed to find a land this time gaining a Wrath of God. Laughs continued as no land from Dante was met with a Mesmeric Fiend form Justin (removing Counterspell) – by the time he got land out, there would be nothing left to cast!

Justin, funnily enough had stalled at 2 land, but it was 2 mare than Dante – and the 3rd turn double Duress that plucked the Wrath and a Counterspell, was enough to keep him, Dante and the rest of the crowd smiling as he attacked for 3 damage (Dante - 15). 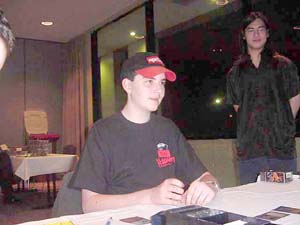 The 4th turn saw Dante slam down his hardly fought mountain to the applause of the crowd! Even in this complete rout Dante could see the funny side of it. A second Fiend pulled the Fact or Fiction he had just drawn and the attack left him at 12.

Conceivably Dante could cast a spell now as he dropped an island. Still at 2 land Justin just pressed forward putting Dante on 8. A third land let Dante Repulse a Fiend (FOF), but at that point it was all over as upon seeing what he had drawn scooped and headed for game 2.

Dante saw his opening hand of Syncopate, Prophetic Bolt and 5 land and jumped at it, however Justin opened with the familiar Duress (Syncopate), Mesmeric fiend (Bolt) start left him with nothing but land in hand. A 3rd turn Phrexian Rager netted a card and a 4th turn fiend (P'Bolt) was responded to by a Fire – which killed the other fiend. 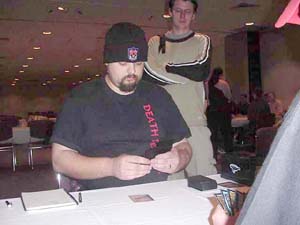 Justin attacked leaving Dante on 12 committing more forces tapping out for a Nantuko Shade. Luck hadn't totally deserted Dante as he mised a Wrath of God to clear the board and finally get his Prophetic Bolt back. Justin was still able to threaten with an uncountered Nantuko Shade. Next turn Justin yet again tapped out, this time for an Ichorid, only to have the perfect card played against him in the form of Fire/Ice.

A brake was put on things as the top decking continued with Teferi's Moat being set to black. The Cloudchaser Eagle was then Memory Lapsed and then Countered. Finally a Vindicate removed it with a Prophetic Bolt (1 pain land - 11) being shot in response. The moat was then replaced with a CoP: Black, realising the vindicate should have been countered and presuming the CoP was drawn off the Bolt, Justin returned the Ichorid to play and then vindicated the CoP. Dante, of course prevented the next black damage but Justin attacked anyway, angry with himself for not seeing the play. After that it was a case of removing his black horde from his graveyard and attacking with the Ichorid. Although it looked like he would end up one creature (to remove for the Ichorid) short, the final turn play of a second Ichorid looked to get him over the line. Ever the competitor, Dante tapped his red land and looked set to announc Fire/Ice again – but instead revealed 2 more land, a Flametongue Kavu and his own hand shake.

Ladies and Gentlemen, I give you the first National Champion of 2002 – Australia's Justin West