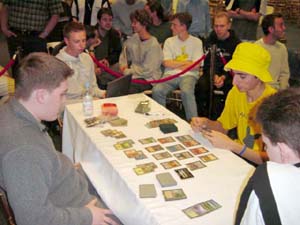 Kai started off the final match of GP London 2001 by fixing his mana with Lay of the Land after Gabriel mulliganed his hand. Gab tried to use Ice in Kai's upkeep to tap Kai's Island but Kai floated one blue mana, drew a card, and played Worldly Council. This slowed Kai down, but not by much as next turn he Harrowed and played Destructive Flow. This was not terrible for Gab as he already had three basic land types and, since Kai was tapped out, played Meddling Mage, naming Collective Restraint.

Gab seemed frustrated by his hand and next turn played out Galina's Knight, which let Kai cast Allied Strategies. A Goblin Trenches from Gab put Kai under some more pressure but Kai had his own Trenches and much more land than Gabriel.

Gab went down to three lands in an effort to force enough damage through before Kai could stabilize. He managed to drop one more land and tried to make a Lightning Angel which was met by an Evasive Action; Kai managed to keep his opponent's creatures under control by trading in combat. Harrow fed Kai more lands for his Trenches and the Yawgmoth's Agenda played that same turn would give him even more from his graveyard.

Gabriel needed to look for answers of his own and used Prophetic Bolt. He took a considerable time to decide on which card to take and even then didn't appear to be happy with his choice but managed to attack Kai down to four life. The Overgrown Estate which Kai then played got a huge wince from the crowd and Gabrielle hung his head as Kai's eight lands which he had in play would be plenty to keep him alive, plus he already had many in the graveyard which would return thanks to the Agenda.

Kai began to run out of land, though, dropping to six in play as Gab kept forcing him lower each time he attacked. He spent his turns looking for a solution with Worldly Counsel and appeared frustrated not to have drawn into a Void. 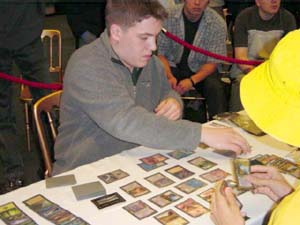 Gabriel tried for another Lightning Angel but Kai used the Evasive Action in his graveyard to stop it and looked nervous while counting his land in play. He then tried to cast a Harrow but the judge pointed out that he had already played his spell for the turn due to Agenda, and used some of the three mana in his pool to activate his Trenches.

During his next turn, Kai played Pernicious Deed but could only leave three mana open. Gabriel forced him into a difficult choice the next turn when he played a Skizzik (no kicker) but Kai had to let it resolve. Gab started to work out what he should attack with but then just shrugged and attacked with everything anyway. Kai activated his Deed for 2, killing the Meddling Mage, Knight and some goblin tokens.

Kai could finally play one of the Collective Restraints in his hand now the Mage had gone but by this time had been forced down to one of each basic land type. All Gab had in play was four lands and his Trenches and it was unlikely he would be sacrificing any lands to make goblins very soon especially as next turn Kai played the second Restraint which was in his hand.

Kai seemed to have calmed down now he wasn't in some much danger and pretty much ignored the Lightning Angel which Gabriel played and next turn played a Legacy Weapon. The best Gabriel could do in return was use Prophetic Bolt to reduce Kai's lands in play. Kai started to remove his opponent's lands from the game and Gab used an Urza's Rage to reduce his opponents lands even further.

Gabriel started to try to work out how many lands Kai had left in his graveyard and hand but had yet another of his lands removed from the game. Fortunately he had another Rage which turned into an expensive Stone Rain; he didn't manage to quite get rid of the complete basic land set.

Then it was Kai's turn to work out what land was left in his deck when he used one of his Lay of the Lands to try to thwart his opponent's plans to spoil his mana base. Kai however simply kept removing his opponents lands one by one and by this stage was down to seven cards in his deck. He was discarding at the end of his turn as he had eight cards each time and could probably start discarding his second Legacy Weapon (even though he had the Agenda out, he could still bypass the effect and shuffle it back into his deck).

An Ordered Migration for five birds was played and when Gab's Angel was removed from the game leaving him only two goblin tokens as his permanents in play he conceded.

Gabriel started to put on the pressure early with a second-turn Galina's Knight which started to attack while Kai fixed his mana with Lay of the Land and Chromatic Sphere. After much thinking he made a second Galina's Knight and thought for a long time about what land to play, settling on a Battlefield Forge, obviously worried about Destructive Flow. Kai's answer to the Knights was a Pernicious Deed which gave Gabriel pause for thought although it didn't get activated during his next attack. An Ice forced Kai to use his mana to play Worldly Counsel and Gab used his chance to play a Skizzik with kicker. Kai activated the "disk" to kill the Knights and next turn played a Collective Restraint. Gab had the Aura Blast for it though and gleefully removed it and summoned a Lightning Angel to which Kai scooped up his cards. 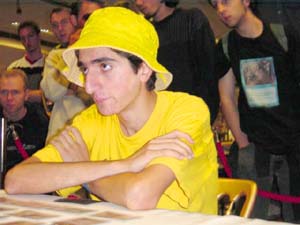 Kai's hand in the third game forced him to think long and hard about keeping it or not and then he shook his head, peeked at the top two cards and nodded that he had made the right choice. He shrugged and kept his next land though was slightly relieved when Gabriel decided to mulligan too.

Gabriel slowed down Kai with an Ice during his upkeep to prevent him from potentially playing Harrow as at that point he only mana his land could produce was green.

A few turns and land later Kai was excited to be able to put a Spiritmonger into play but Gabriel swiftly Repulsed it, untapped and played Lightning Angel. Kai's mana base sorted itself out when Kai got the opportunity to Harrow and then he replayed his Spiritmonger.

The Spiritmonger was looking a bit mean from Gabriel's side of the table and he spent plenty of time thinking about his best course of action. The second Angel he played indicated that he thought it would be best to race, even though Kai still had a Pernicious Deed in play. When the Monger attacked Gab picked it up to read it to see if there was some weakness about the creature which he hadn't worked out yet; this drew a chuckle from the crowd. Gabriel decided to double-block the Monger which then became an 8/8 and forced Kai to spend a Black mana to regenerate it.

When Gab tried to attack with his remaining Angel it was removed with the Deed and Gab's play was to pass the turn and Prophetic Bolt Kai during his upkeep. He spent a long time looking at the four cards he was reviewing from the Prophetic Bolt, biting his lip and shaking his head indicated that he didn't think there was a very good solution to the Spiritmonger or a way to burn Kai out fast enough.

A second Budde Spiritmonger got a big "ooh" from the crowd and things didn't look too good for Gab. He was forced to play a Goblin Legionnaire; Kai flipped over Pernicious Deed, killed the Goblin, attacked and became 2001 GP London Champion.