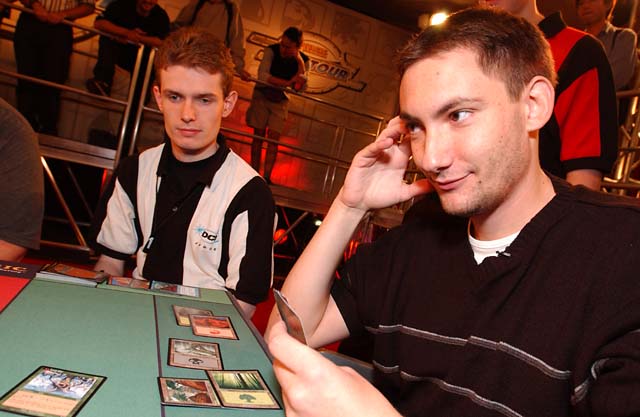 The difference in experience became obvious as soon as the two competitors sat down. Kai was relaxed and jovial, while Nicolas seemed tense. The presence of the German Juggernaut was felt throughout the Garden. Eighty-eight Pro Tour points in the past year, player of the year twice, and three Pro Tour wins made Kai the talk of the arena. Could he win the Pro Tour for the fourth time?

Olivieri is not a Pro Tour rookie, despite his relatively unfamiliar name. He earned nineteen Pro Tour points last year, finishing twenty-second in Pro Tour Chicago and a top sixteen at European Championships. Also, he has beaten Budde in their only previous meeting, by taking a Jhovall Queen out of Kai's deck with Bribery at Pro Tour Los Angeles 2000. In this match Olivieri would try and become one of the very few people to beat Kai twice at the Pro Tour.

The match-up featured two five-color green decks in a mirror match. Both have the full compliment of lands in their decks. The ability to produce the correct mana is a large part of success in this type of mirror match, and both players have a good deal of mana fixing. Olivieri has Fertile Ground, Harrow, Quirion Explorer, and Urborg Elf to power his bombs. Budde has two Quirion Elves, Quirion Explorer, Urborg Elf and two Lay of the Lands.

The tempo cards are all found in Kai's deck as well, AEther Mutation, Yavimaya Embrace, and Temporal Springs are three solid blue green cards that produce tremendous tempo advantage for the German. Interestingly, Olivieri choose not to play with Temporal Spring, instead using only Recoil for bounce effects.

The game begins with Budde choosing to draw after winning the die roll. The decision is a good one, with both players' mulliganing very poor draws. Kai uses both his forests to bring a Quirion Elf into play naming black. Olivieri fails to play a third land and passes the turn.

Kai is also suffering from a poor draw, fails to play a land and is only able to attack with the Elf before passing the turn. Olivieri does draw a Forest but is still doesn't cast a spell with his two Forests and a Swamp.

Kai draws and casts an Urborg Elf to join in the elf beat down action, but Olivieri casts a Scorching Lava with his newly found Mountain to leave Kai with only the Quirion Elf.

The Quirion Elf was apparently trying to go the distance as it swings for the fourth straight turn. Kai has finally found another mana source, and uses his Lay of the Land to fetch a Plains. The white mana allows the German to summon another beatstick, Benalish Trapper.

For the second straight turn Olivieri just draws his card and says done. Then Kai draws a Mountain but it apparently doesn't give him any mana for more creatures as he just swings with the Trapper and the Elf knocking Olivieri to fourteen.

Finally, Olivieri makes a play by bring out Urborg Elf, which could really improve his chances, this game. For not drawing any land he is very fortunate to still be in this game.

Kai makes a good play by attempting to Consume Strength the Elf, onto his own Benalish Trapper, but Olivieri fights back with a four point Gaea's Might. Even though Kai could swing his 3/4 Trapper past the now 3/3 Urborg Elf instead Kai decides to try and keep Olivieri in a tight mana situation by using the Trapper on the Elf during the Frenchman's upkeep.

Olivieri draws a Forest, but is once again unable to make any plays on his own turn. Kai is finally able to play out a creature that has power greater than one by summoning a Kavu Chameleon. The Benalish Trapper swings since Kai decides to leave up a green mana to protect his Kavu, instead of trapping the Elf again.

Olivieri uses this window to cast a three card Allied Strategies, but still doesn't draw land in these three cards either. Shaking his head at the continuing string of bad luck, he is forced to discard two cards, and chooses Sunscape Apprentice and Minotaur Tactician. 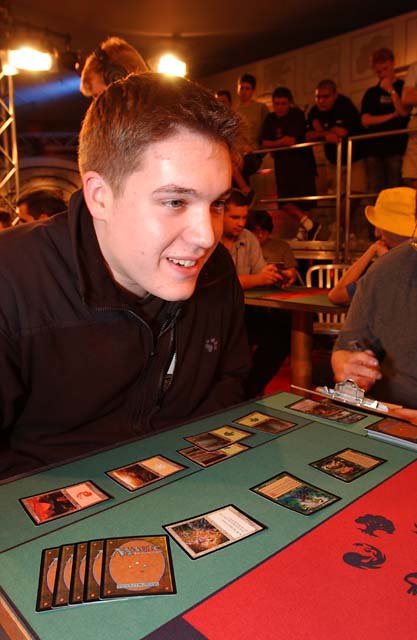 Kai brings his Kavu Chameleon and his Quirion Elf in for more beats dropping Olivieri to eight life. Once again during the upkeep Kai attempts to tap the Urborg Elf with the trapper, but this time Olivieri has an Instant to cast. Recoil sends Kavu Chameleon back to Kai's hand, and Kai discards Treva's Charm. Olivieri keeps going in his main phase by playing Fertile Ground, Island and Quirion Explorer. As often happens with five-color green Olivieri went from mana screw to mana flood all in the course of one turn.

Kai still doesn't have much to do, replaying the Chameleon and attacking once again with the Trapper. On Olivieri's turn he reveals what he kept over Minotaur Illusionist playing Standard Bearer and Cromat.

Even though Olivieri has an Island and a Forest untapped Kai decides to Slay Cromat, to which Olivieri responds by placing Cromat back on top of the deck. Kai soon reveals his plan when he remarks, "Let's bury that one a little bit deeper", and casts Temporal Spring on Standard Bearer. Unlike their first Pro Tour meeting Kai is now putting cards back in Olivieri's deck instead of Olivieri taking cards out of Kai's.

With Cromat buried two cards down in his library, and his life total down to two from the latest Chameleon and Trapper hit, things are looking grim for Olivieri.

His attempt to get back in the game with a double kicked Stormscape Battlemage doesn't do enough, as Kai Agonizing Demises it with red kicker and finishes off Olivieri with the Kavu Chameleon.

When Olivieri picks up his sideboard before game two, Kai starts up with the witty banter once again remarking "Sideboard! In team draft!" The Frenchman seemed shaken as even though Olivieri chooses to draw he plays a Forest before Kai has a chance to go. Kai mulligans again muttering under his breath, but he decides to keep his second draw.

In this game Olivieri gets the first elf bringing Urborg Elf out on turn two. Kai knows the power of the mana in this match-up and wastes no time Slaying the Urborg Elf on his turn.

Kai is the next to move by playing a Mirrorwood Treefolk on his fourth turn. Following a continuing trend of Olivieri doing nothing on his turn, Kai sends in the Treefolk for two points and brings out a Urborg Elf.

Once again Olivieri does nothing while Kai pounds away with the Treefolk and the Elf, bringing the life scores to: Budde 20 Olivieri 15

With Kai sitting on four Forests, a Swamp, and an Urborg Elf and Olivieri having three Forests, two Swamps, and two Islands both players rotate drawing a card and saying done for the next couple of turns.

A little action occurs after Olivieri brings out a second creature, Ebony Treefolk, allowing his Kavu Chameleon to take four from Budde's life total. This doesn't work out great for Olivieri when Kai shows a Hunting Drake, which had been looking for a target. The Mirrorwood Treefolk sends Olivieri down to eleven life.

A replay turn occurs when the Ebony Treefolk is recast and the Kavu Chameleon eats four more of Kai's life total.

Kai finally gets white mana drawing Elfhame Palace, but is content to only attack with Hunting Drake before playing a Quirion Sentinel to play an Aura Griffin.

After a good deal of thought, Olivieri plays a Mountain and casts Scorching Lava on Kai's Aura Griffin. Olivieri probably killed the Griffin instead of the Drake in order to better protect his black creatures against targeted black removal. However, this decision seems like it might come back to haunt him when Kai played a Sunscape Apprentice.

The Hunting Drake knocks Olivieri to seven, and then to five after he casts a Minotaur Illusionist on his turn. Olivieri desperately tries to get back into the game by Recoiling the Mirrorwood Treefolk on his next turn and attacking with the Illusionist to place Kai on nine life. 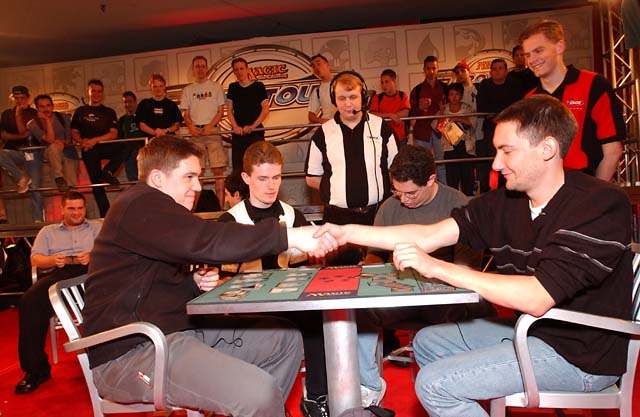 The Minotaur shoots down the Hunting Drake, as Kai decides not to place the Drake on top of his library, but to instead cast Lay of the Land for his Mountain and replay a now active Mirrorwood Treefolk.

A second Mountain for Olivieri allows him to play Mire Kavu, and then gate it with his Horned Kavu. When he passes the turn, the audience knows that the match is about over just by looking at the grin on Kai's face. With the Agonizing Demise looking forward to kick Horned Kavu to Olivieri's dome and Darigaaz's Charm Lighting Bolt effect looking to do the same, Kai knew he was about to becoming the first player ever to have won four Pro Tour's.

Kai has now won as many Pro Tours as Jon Finkel and Tommi Hovi combined.