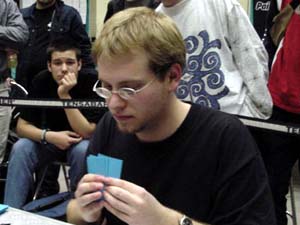 is it. One more match to go and after an unexpected day one normality seems to have returned. It's the final and surprise surprise two Affinity decks are battling out. There might have been some pretenders to the throne but the Machines will not be stopped. In even less of a surprise one of them is being piloted by Kai Budde. A relatively lean season on the Pro Tour hasn't stopped the Juggernaut from picking up a title earlier in the year in Madrid and now he is on the verge of another piece of Glass for the trophy cabinet. Standing in his way, like so many poor souls have tried before, is the relatively unknown Tobias Henke, also from Germany.

Henke won the die roll and both players rattled out of the gates with Arcbound Ravagers. Henke was looking the better though as he had a Skullclamp. He made a Frogmite and considered attacking with his Ravager. The Ravager nipped into the red zone and a second skullclamp entered play on Henke's board. To further complicate matters both players had Welding Jars.

Facing down two Skullclamps Budde chose to summon the one mana walking fireball that is Disciple of the Vault. He cast a Thoughtcast to bulk up his hand. The game was starting to resemble a near perfect mirror as Henke had his own Disciple. Unfortunately Budde was lacking the clamps and could only watch on as Henke double clamped two Frogmites and drew eight cards.

Not good for Budde. His Thoughtcast wasn't really in the same league. He did finally find a Skullclamp and dropped it on a freshly summoned Myr Enforcer. The game was at a blink and it's all over stage.

Unfortunately I was the one who blinked as a hail of Shrapnel Blasts flew across the red zone and resulted in Budde scooping. Fortunately that's what table judges are for and a quick check of Oli Bird's checklist gave a slow motion replay of sorts. Both players had Disciple's and Ravagers and the capability to deliver a heck of a lot instant speed damage to each other. It was a timing issue and Henke fluffed it by breaking and flinging his Shrapnel Blasts at Budde early. If Budde also had two blasts he would win the game, but he couldn't find them even by sacrificing the clamped Enforcer to the Ravager.

Budde attacked with the 3/3 Frogmite and I risked taking the opportunity to take some pictures. The game state looked reasonably early, but you can never tell with Affinity. Budde had a Detonate to try and gain the Skullclamp advantage. Henke simply replaced it with another one from his hand, and another one just in case.

Budde also had a second and a nasty looking Ravager. Henke's response was to double clamp the boosted Frogmite and draw four cards when an Atog popped out to eat it.

Budde pulled the same trick with a Enforcer and then I foolishly looked away. When I looked back Henke was picking up his cards. Dammit, Affinity is fast. This one was easier to work out as Budde had cast two Disciple of the Vault in the same turn. Only about twenty or so damage combined with the Ravager.

I was starting to think I needed some sort of slow motion replay system here. Fortunately a mulligan and shuffling from Budde gave me chance to catch my breath back.

Henke laid a Great Furnace and mysteriously failed to make a Skullclamp. As did Budde.

Then I foolishly did that blinking thing again and when I looked up Henke had an Arcbound Ravager, Skullclamp and three Frogmites as well as simultaneously managing to dispatch Budde's Disciple of the Vault with an Electrostatic Bolt. 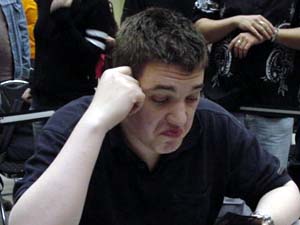 Budde's response was a feeble Welding Jar. It's not often you see the German Juggernaut on the receiving end of a real kicking but this game was not looking good for him. Henke started feeding his clamped Frogmites to the Ravager to pump yet more gas out of his library.

Budde tried to salvage some respect with a Ravager of his own and an Enforcer. His draw simply had not been as good as his opponent's and an attack followed by a Shrapnel Blast handed the rarity of a final's defeat to the German.