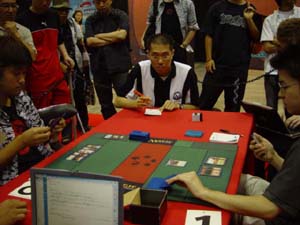 This was it. A weekend of red-white mirror matches coming down to one final best of three. On one side, Kazuki Kato, handling the latest tech from Katsuhiro Mori. On the other, Shu Komuro, backed by a cadre of loyalists. It all came down to this match.

Komuro's third-turn morph met no resistance from Kato. Komuro flipped it up and swung in heedless of potential Wing Shards, and scored a hit. Kato could only play an Astral Slide, and had no single-mana cycler to spare himself four damage. Komuro added a Silver Knight to the table.

Kato waited on his mana. He cycled twice to rid himself of Komuro's attackers for a turn. Komuro waited, but Kato merely picked up his Dragon to save himself from the Angel for another turn. Komuro seized the opportunity, making two men with a cycled Decree of Justice, then untapping and swinging in, forcing out the Dragon. After combat he cycled a Decree of Annihilation, and Kato couldn't pack up fast enough. 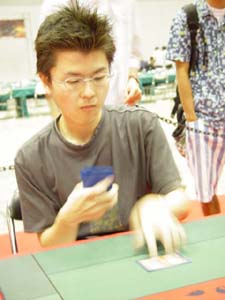 Kato had a Temple of the False God for his second land, but his deck came to the rescue, offering a mountain to let him cycle Eternal Dragon. Of course, not before Komuro had unmorphed an Angel on turn four. Kato cycled another Dragon and waited on six mana. Komuro, holding Decree of Annihilation, played a Temple and thought. He chose to add a Rift to the table, but that just made Kato's Akroma's Vengeance all the sweeter. Now he had no threat, and nothing to do.

Kato regrew his Dragon, and then added an Astral Slide on the following turn. Komuro had to be considering hard-casting his Decree of Annihilation. He had a Wipe Clean in hand, so if he was willing to wait a turn, he could even be rid of the Slide. He gave it back to Kato, who summoned Akroma and watched his Slide disappear in response. He chose not to attack.

Komuro looked at the board, and the Wing Shards and Decree of Justice in his hand. The life totals were twenty-four to fourteen in his favor. He played possum. Sure enough, Kato cycled a Decree of Annihilation on his turn, thinking he'd steal victory. Komuro cycled Decree of Justice for a bunch of men, and suddenly the race was running the wrong way. Kato conceded before the baffled onlookers could take in what had happened.