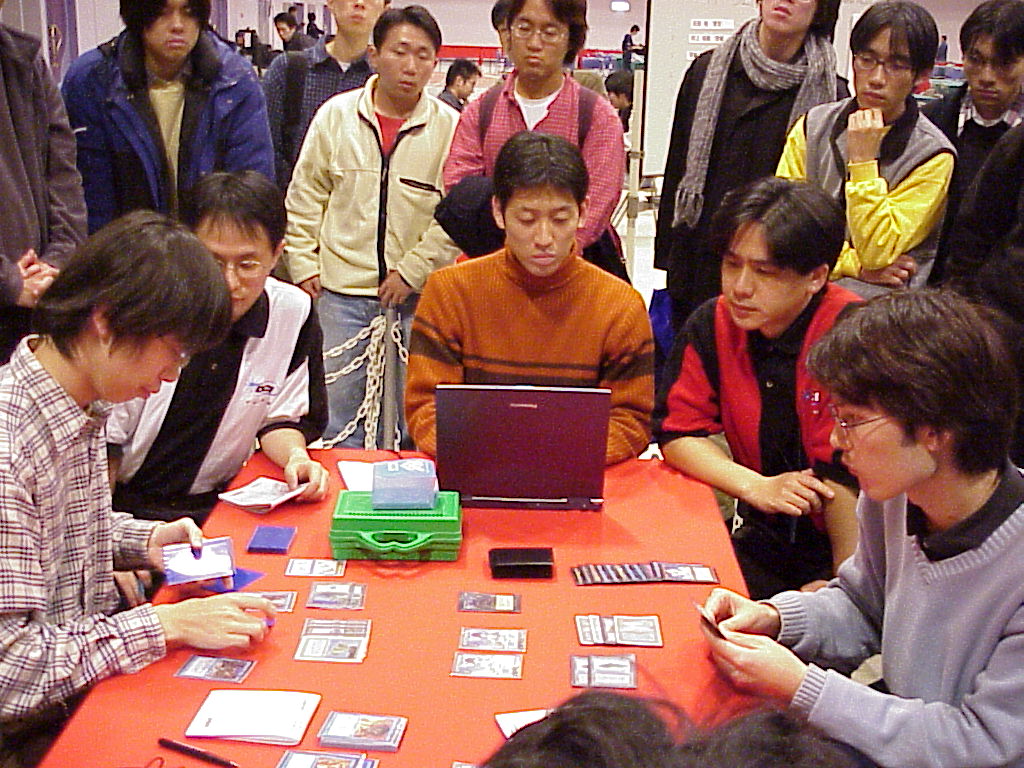 It was an exciting all-Japan finals for Grand Prix - Sendai. On one side of the table sat Kazuaki Arahori, the amateur. However, Having just smashed both Rookie of the Year Katsuhiro Mori and longtime pro Mike Long, Arahori was brimming with confidence. Opposite him was noted deckbuilder Kazuya Hirabayashi, who was responsible for the deck most Japanese players (excepting Tsuyoshi Fujita) ran at Pro Tour - Tokyo. Today he was with Donate, and was in for a rough ride against Arahori's Zombie-Go.

Arahori won the opportunity to go first, and busted out a turn-two Zombie Infestation. Hirabayashi let it through. He then Merchant Scrolled up a Counterspell, and used Force of Will to bust an incoming Finkel, pitching Accumulated Knowledge. Arahori started the slow-motion beats with a lone zombie, pitching lands.

Hirabayashi was fine taking it slow. He got another Counterspell via Merchant Scroll and developed his mana base. Fact or Fiction resolved, giving him two Intuitions and a Donate over Intuition and Illusions. He failed to draw land, and so had to burn an Intuition getting an island.

Arahori was getting desperate. He blew another Accumulated Knowledge. He had just four lands in play to Hirabayashi's seven. However, Hirabayashi was low. A second zombie came to play and helped knock him to seven. Fire removed one at end of turn, but Hirabayashi held just countermagic, Donate and Intuition.

Morphling to the rescue! Hirabayashi ripped the shapeshifter and dropped it into play. Arahori answered with a Knowledge for three. It resolved. Emboldened, Arahori went for Intuition. That was verboten. Morphling entered play. 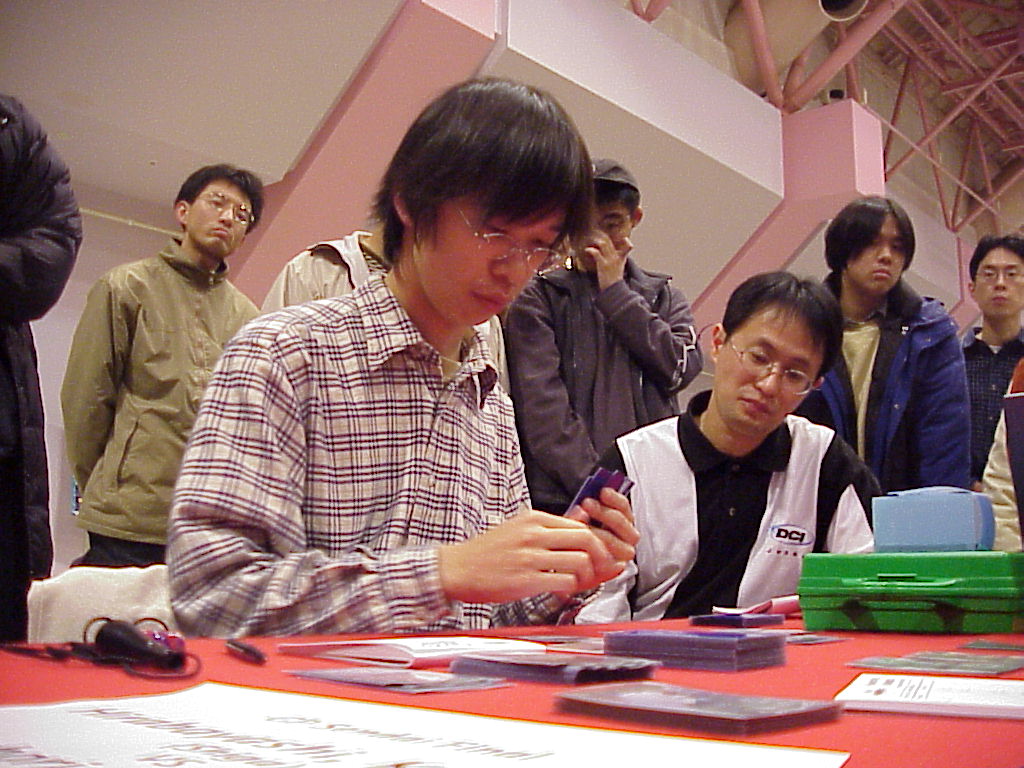 Arahori untapped and tried Opposition. It was Forced. Winter Orb? Force again. Still, Hirabayashi had expended most of his hand to stave off disaster.

And then from the very top of his deck, Accumulated Knowledge for four! But it didn't offer much in the way of gas, just combo pieces and a Medallion, which he played. Arahori made him pay. Opposition resolved! Winter Orb resolved!

Hirabayashi smiled as he showed Ice to turn off the Orb and free his seven lands.

Arahori had to mulligan in Game 2, but came back with a strong hand. He Duressed away Hirabayashi's Pyroblast, then pushed a Shadowmage Infiltrator past Counterspell with Force of Will. Next he tried a second Duress. Hirabayashi hid Donate and Force of Will with Brainstorm. Arahori took Intuition over Accumulated Knowledge and Merchant Scroll. He followed up with Winter Orb.

Hirabayashi sighed. He Merchant Scrolled up a Fire/Ice for later use, burying the Donate in his deck. Arahori kept his hand full with Gush. Hirabayashi drew Capsize, the played a Knowledge for two, getting Force of Will and Merchant Scroll. Not bad at all.

Arahori untapped. Hirabayashi tapped the Winter Orb. Arahori Duressed, pulling Illusions and leaving Hirabayashi with two Forces, a Capsize and a Merchant Scroll. He then drew four cards with Accumulated Knowledge. Unfortunately, it should only have been three. The mistake was caught early, and corrected.

Hirabayashi gasped as he drew another Fire/Ice. He Merchant Scrolled for a Fact or Fiction, then passed it back, tapping the Orb during Arahori's upkeep. Amazingly, Arahori had the fourth Duress. He used it to pull Force of Will. Phyrexian Negator followed.

Hirabayashi played Fact or Fiction, looking for answers. He got mountain, island, and Brainstorm at the cost of Pyroblast and Shivan Reef. Arahori had another Negator. Hirabayashi tried to Force, but met Counterspell. From there, he was firmly in the Orb's clutches, and they were on to Game 3.

Arahori's hard road continued as he mulliganed again. And again. He stopped at five with just one land. But Hirabayashi's draw was not insane. He stalled at two lands, forgetting to Brainstorm at the end of Arahori's turn. It cost him, as he drew nonland, and Brainstormed into three nonlands. He had to wait a turn to Merchant Scroll and randomize the top of his deck.

However, his troubles were nowhere near as dire. He pulled an island, and was firmly in control behind a hand of two Counterspells, two Pyroblasts, two Force of Will and a Capsize. He stopped a Duress with ease. He Brainstormed into still found no lands. He tapped out for Sapphire Medallion. 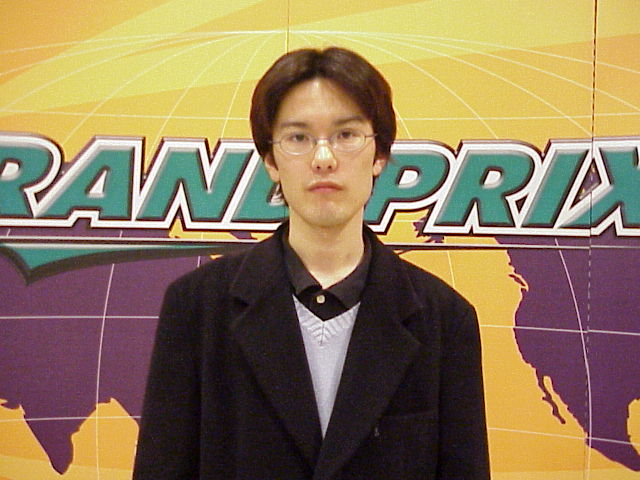 Arahori made him pay for being greedy. He Gushed into Phyrexian Negator. Hirabayashi Forced. Arahori Forced back. Hirabayashi had to Force again. Still, two Pyroblasts made Hirabayashi feel safe.

Arahori undid that with Zombie Infestation.

The game that was lost so early had suddenly reversed. With no countermagic, Hirabayashi couldn't squander his Capsize. Matters were made worse by the fact that Arahori had Squee and Krovikan Horror. He pounded out the zombies with a quickness.

The countermagic came too late. Four zombies on the table meant that Arahori could just keep on swinging. Hirabayashi extended the hand in defeat.