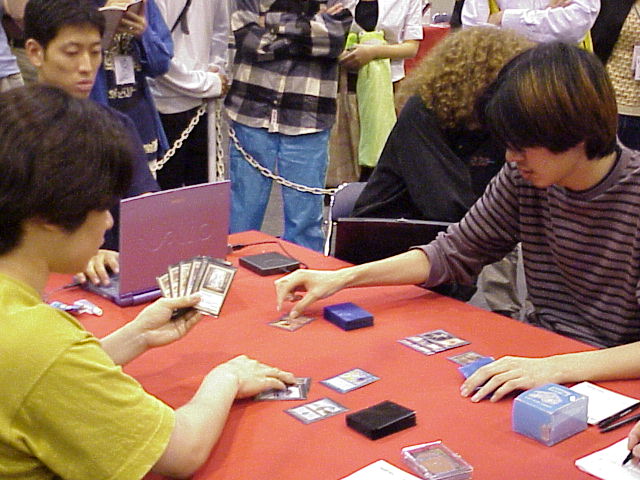 These two players make an interesting pair. Masahiko Morita is a player who's paid his dues. With numerous Top 8s on his resume, he's just looking for that one breakout performance to make a name for himself. Kohei Yamadaya, on the other hand, is a player more interested in the social aspect of the game, making his mark as a player of consummate sportsmanship. No-one expected him to make Top 8, but he drafted a bomb-heavy special and now finds himself one win away from a title.

Morita was the heavy favorite, and not just because he had more friends watching. Morita's deck is a super-aggressive green-red, with Rites of Initiation and Demoralize as surprise finishers. It's the sort of deck that eats slow control decks for breakfast. Yamadaya, however, isn't about to roll over. With Aboshan, Cephalid Emporer and Iridescent Angel on his payroll, he can take care of business.

Morita lost the opening volley of RPS and so had to draw first. His hand was slow, but had enough land so he chose to keep. The first play of the game was his Halberdier, which Yamadaya Syncopated. Unfortunately for Yamadaya, he had no fourth land.

Eager to stave off the beats he knew were coming, Yamadaya played a 2/2 Ivy Elemental. Morita responded with Springing Tiger and Diligent Farmhand. Finding a plains, Yamadaya enlisted the help of an Angelic Wall. Morita kept at him with Krosan Archer, and then Lithatog. Yamadaya couldn't find a fifth land, but did have Diligent Farmhand of his own. With only one forest, he would have to wait.

Morita made his move. He swung with Lithatog, Tiger and Archer, seven mana at his disposal. Yamadaya's Elemental and Farmhand doubled up on the Tiger. Morita tried for a two-for-one with Thermal Blast, but Yamadaya tapped out for Embolden. Unable to kill both, Morita destroyed the Farmhand, losing his Tiger.

However, Morita missed an opportunity. He could have tapped his remaining two mana to search out a land with his Farmhand, making eight in play, then sacrificed five of them to his Lithatog. Along with the Thermal Blast, that would put him at threshold. That way he would dispatch both creatures, do five more damage, keep his Tiger, and have enough mana for the Demoralize in his hand. 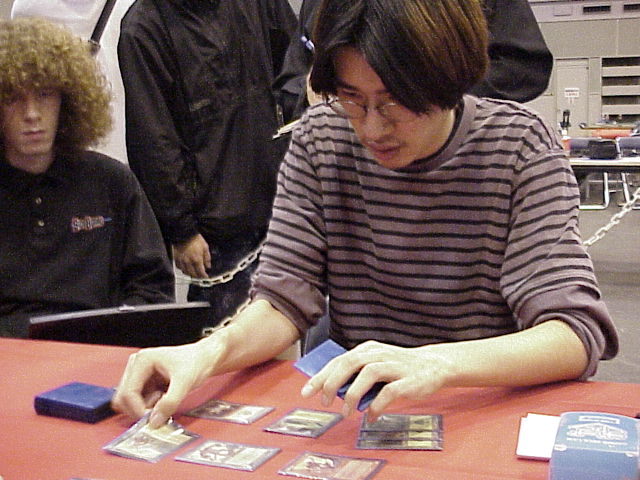 As it was, Morita would have to wait. The time he took let Yamadaya find his fifth and sixth mana, leading directly to Aboshan, Cephalid Emporer. The Squid King locked the Lithatog, and Morita had no response. Yamadaya continued playing platinum hits with Iridescent Angel. Now it was Morita who had little time.

Yamadaya followed up with Cephalid Scout, keeping an iron grip on the Red Zone. Four turns later, the Angel drove him to the Victory Drive-In.

Tellingly, Morita refused to change even a single card in his deck for the second game. Yamadaya, made only a minor adjustment to his mix.

In game two, Morita showed what he could do to a sluggish opponent. Diligent Farmhand rushed out Halberdier while Yamadaya stalled at three land. Next came Gorilla Titan, scary enough to make Yamadaya drop his pen. Centaur Archer followed, and Yamadaya packed it in.

Morita's hand for the third game reminisced of his hand in the first. It was nothing but land and four mana creatures. Yamadaya feasted on the time he was given, busting out Twigwalker without a care in the world. Morita's only play on turn three was to remove it with Flame Burst.

Then, Yamadaya stalled at three land. He made a Cephalid Looter to try and fix the situation. Morita's Chainflinger gave it one turn. The loot was not there. Yamaday discarded Aven Flock and made a 2/2 Ivy Elemental.

Morita untapped and took out the Looter. Yamadaya's face betrayed nothing as he found a fourth land, making a Springing Tiger. Morita matched him with Halberdier. The buildup continued with Nantuko Disciple on Yamadaya's side. Morita's Halberdier got through for three. Yamadaya stood at sixteen.

Yamaday made no play, and Morita was happy to wait, play out his creatures, and Demoralize for the win, all the while sneaking damage with Chainflinger. That was the plan, at least. Next turn, Yamadaya found a second blue, and played Aboshan, Cephalid Emporer. 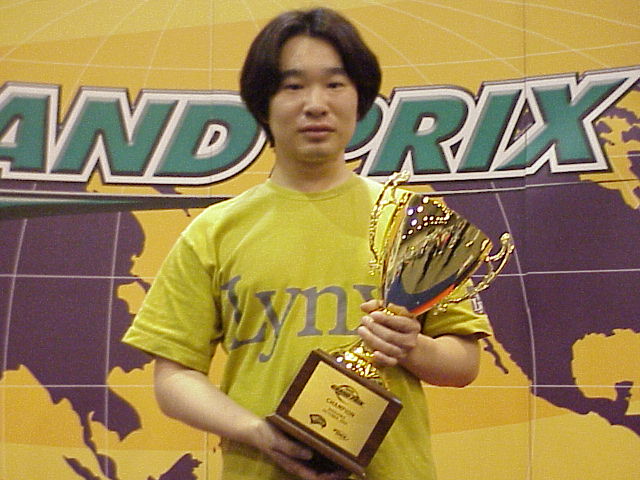 He followed that up with Diligent Farmhand as an encore. Soon he would have three blue at his disposal, and be able to shut down Morita's attack phase. Morita Demoralized and attacked with Springing Tiger, Centaur Archer and his token. Yamadaya played Second Thoughts. He took the rest and fell to ten.

Yamadaya then untapped and drew his third blue. Morita gasped in frustration. He took five from Yamadaya's Attack, falling to thirteen. He needed a Thermal Blast to answer the Walking Ensnare. He did not find one. Aboshan flooded all the creatures. Yamadaya charged the battlefield with all his creatures, dealing lethal damage.