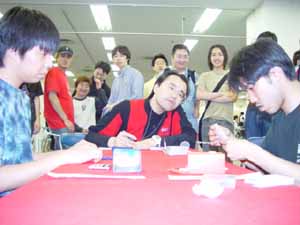 This is it. After three days of competition, two formats and fourteen matches for these competitors, one will return home as the Japanese National Champion, and will be $20,000 richer. The finalist will still pocket $10,000, so both Ootsuka and Fujita are guaranteed a profitable weekend. On top of that, these two men will be teammates at Worlds in August, along with Tooru Maegawa. For Koutarou Ootsuka, this match is a chance at complete redemption. Last year, he made the Top 8 of this tournament only to fall short of making the National Team, and not only has he accomplished that this time around, but he has a chance to win the whole thing. Ootsuka is not the only player looking for redemption in this match either. Osamu Fujita is well known as a “silver collector”, meaning that he has a knack for coming in second place. At Grand Prix Hiroshima, the 1999 APACs and Grand Prix Taipei, Fujita had to settle for being a Finalist. If he can win this match, he’ll finally break the streak and become a champion.

Ootsuka started with Basking Rootwalla, which died right away to Chainer’s Edict. Quiet Speculation fetched two Deep Analysis and Roar of the Wurm, and on the following turn, Ootsuka started to draw extra cards. Diabolic Tutor allowed Fujita to search out Visara the Dreadful, and Ootsuka flashed back the Roar to get a 6/6 into play. Fujita used Undead Gladiator to cycle away Mirari, then cast Chainer’s Edict to kill the Wurm. Merfolk Looter and Basking Rootwalla gave Ootsuka some more resources on the table, and Fujita summoned Visara. The only card in Ootsuka’s deck that could get him out of the situation was his single Upheaval, and he had it, getting a look of disbelief out of Fujita. His expression was essentially the universal way to say “How lucky!”

Still, Ootsuka had decided to play it right away instead of waiting a turn, which meant that Fujita would be ahead on land development. Ootsuka did have the advantage of a Basking Rootwalla in play and Wonder in the graveyard, but the Upheaval was not nearly as devastating as it could have been. Still, Ootsuka dictated the pace, attacking with his Rootwalla and bringing out a Wild Mongrel. Fujita used Skeletal Scrying for two to dig for answers, untapped, and played Duress. Circular Logic countered it, clearing the way for Smother to kill the Mongrel. Fujita soon seized control with Visara, and Ootsuka’s lone answer had already been used. 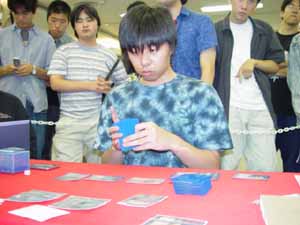 Ootsuka’s first turn Duress revealed Fujita’s hand of five lands, Smother and Visara, and the removal spell headed to the graveyard. This cleared the way for Merfolk Looter to come out safe, and it quickly got to work bringing out Arrogant Wurm. Fujita played Chainer’s Edict, which caused Ootsuka to sacrifice the Looter. Ootsuka cast Cabal Therapy, naming Visara, and Fujita revealed his hand: two Visaras, and lands. This got a strong crowd reaction, as it was the worst possible thing that could happen. Zombie Infestation followed, and Fujita needed an answer fast. Luckily, he drew Diabolic Tutor, so he could find whatever answer his deck could provide. After some thought, Fujita decided to get Mutilate. On end step, Ootsuka discarded Roar of the Wurm and Deep Analysis to Zombie Infestation to make a 2/2, and attacked for six. He then sacrificed the Zombie to Cabal Therapy, getting the Mutilate out of Fujita’s hand. Chainer’s Edict killed the Wurm, but Ootsuka simply flashed back the Roar to get a 6/6. Deep Analysis and Wild Mongrel followed, and the match was soon tied at one game each.

Ootsuka started off with a second turn Compost, which meant that Fujita would be fighting an uphill battle the whole game. He followed this with Zombie Infestation, and not much else happened until Fujita played Laquatus’ Champion. In response, Ootsuka discarded a Rootwalla and Circular Logic to Zombie Infestation, countering the Champion and getting a Rootwalla and Zombie token into play. Fujita’s Cabal Therapy got rid of Circular Logic, allowing Visara to come into play without any problems. Thanks to the Therapy, Fujita knew that Ootsuka did not have Upheaval, and he’d have to draw it off the top in order to win. Since that was unlikely to happen, Ootsuka did the only thing possible and made another Zombie token (playing a madness Arrogant Wurm in the process), and went straight for the jugular, attacking with all his creatures right into Visara. Fujita played Nantuko Shade to stabilize the board, and once again Ootsuka had to go for the long shot play, using Quiet Speculation to put two Deep Analysis and Cabal Therapy into his graveyard. If he could draw into the one Upheaval in his deck he had a chance, but otherwise it was Fujita’s game. Nantuko Shade put some more pressure on, and Ootsuka threw everything he could at it to buy more turns, and more opportunities to draw Upheaval. Sure enough, the plan worked out as the rest button showed up in time. Ootsuka cast it and already had the Infestation, so Fujita conceded. 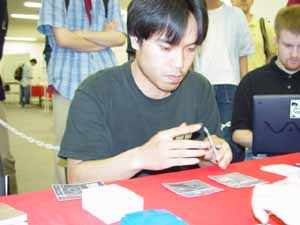 Ootsuka’s Duress revealed a hand of Visara, Smother, Skeletal Scrying, Diabolic Tutor and lands- Scrying was discarded. Ootsuka cast Quiet Speculation, getting a Roar and two Deep Analysis. Cabal Therapy took Diabolic Tutor out of Fujita’s hand, and Fujita played his own Therapy, getting Circular Logic out of Ootsuka’s hand. The rest wasn’t bad, as it contained two Phantom Centaurs, a Rootwalla and Compost. Unfortunately, Ootsuka didn’t have any green sources to cast them, but found one off the Analysis. This was exactly what Ootsuka wanted, since it let him flash back Therapy and get Visara out of Fujita’s hand before he could cast it. Basking Rootwalla allowed that to happen, saving Ootsuka from being in another “Upheaval or lose” situation. Fujita cast Diabolic Tutor, and surprisingly, opted to search for Undead Gladiator. Ootsuka’s Compost made things even worse, but Cabal Therapy took both Centaurs out of his hand to at least buy some time.

The Roar was flashed back, and Smother killed it immediately. The threats kept coming with Wild Mongrel, and Fujita started smiling and laughing, realizing that with Compost out, it would be next to impossible to win. Smother targeted the Mongrel, and Ootsuka brought out Arrogant Wurm in response. Merfolk Looter was enough to convince Fujita to play Mutilate, but Compost kept the threats coming. Another Arrogant Wurm was summoned for five mana, and Fujita killed it with Chainer’s Edict. Basking Rootwalla came out and died when the Edict was flashed back, and Ootsuka played Zombie Infestation. He discarded two lands to make a Zombie, and started attacking for two. In an odd play, Ootsuka cast Quiet Speculation on Fujita, putting two Chainer’s Edicts and Cabal Therapy in his graveyard- this allowed Ootsuka to draw three cards off Compost. Two Mongrels and a Looter followed, and even flashed back Edicts couldn’t keep Fujita in the game, as Ootsuka would simply discard cards to Infestation and sacrifice Zombie tokens. Arrogant Wurm and Phantom Centaur made Ootsuka’s side even more impressive, and Fujita used Undead Gladiator to search for Mutilate in a last ditch effort. Laquatus’ Champion showed up instead, and Ootsuka had the Circular Logic to give him the match and the 2003 Japanese National Championship.