Marco and Matt agreed to a $200.00 split before the match even started. Marco was quite happy after winning the die roll and getting the opportunity to play first. 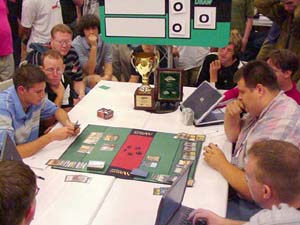 Linde sent his face down Angel into the Red Zone without the mana to flip her face up, and Marco cast Moment's Peace in response. The early use of the Moment's Peace could cause trouble later on, should Matt ever find the mana to turn it face up.

As both players settled into the mid game they were both able to at least agree that their mana bases weren't to blame for any problems. Linde was looking at the ability to cast anything in his deck, as was Marco.

Matt found a second Cabal Therapy, named Cunning Wish and saw something even better. Marco was only holding an Island, two Plains and a Moment's Peace. At the end of the turn, he was able to Compulsion into Deep Analysis and Mirari, which allowed him to completely refill his hand the following turn.

"You say, 'Jesus,'" came the exclamation from Marco. "I'm the one drawing all the lands."

The players around the table all got a laugh out of that one, particularly Matt Linde. 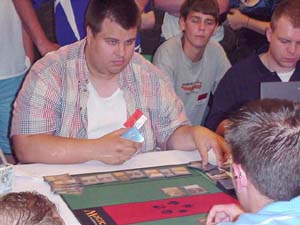 Marco calmly allowed it to happen before casting Cunning Wish and getting Hunting Pack. The Hunting Pack became an army of 4/4 creatures when the two players realized that five spells had been cast that turn

Marco ripped an opening hand of two lands and three creatures, probably not the best thing he could have found for this match in Game 2. His rally depended on how much of the creature removal Linde had left in his deck after Game 1.

Linde dropped a turn two Interrogator, and on turn three started using him. Blume revealed a Cunning Wish and a Compulsion, and since there was one on the table anyway, Linde took the Wish. Linde activated the creature again, this time taking an Anurid Brushhopper from Blume. The third activation brought Linde the choice of Logic, Decree, or Compulsion. Linde took the Decree of Justice and passed the turn back to Marco.

Marco ripped Wrath off the top after that, and the game changed. He could cast Deep Analysis, use the cards to save his Brushhopper, and then cast Wrath to clear the board. He ripped the next two cards of his deck and found two more copies of Wrath of God though. To clean the board would cost him all three copies of the powerful card.

He took the gamble, and it proved costly. Matt was able to Smother the Brushhopper after the creature came back into play.

Marco spent a moment looking through his graveyard after that. "All my win conditions," he muttered. "I don't believe it."

A turn-two Cabal Interrogator from Linde was met with Mana Leak, and the game was underway. Marco set himself up to get all the pieces in place quickly by removing Linde's discard machine, now he just needed to finish him off.

Linde had other plans though, playing a face down Exalted Angel on turn three and then using the ability of the Eternal Dragon to get a plains. He used the Plains to flip over his Angel and sent her into the red zone.

Marco had a plan of his own for the end of the turn. He used Cunning Wish to get Wing Shards, meaning there would be no more attacks from Matt's Exalted Angel. 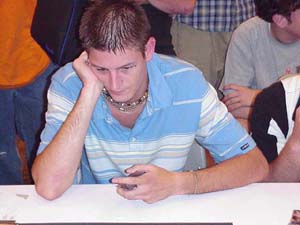 Marco tried to take advantage of the empty table by playing his Brushhopper, but Matt Smothered it to remove it from play.

Blume finally drew a Mirari's Wake right after that, and the people behind knew that it meant the game could be over quickly There was a little bit of surprise when he decided not to do it that way.

Marco's next draw was an Upheaval, giving him another option for Matt. If he played the Wake, then followed it the following turn with Upheaval, he could float enough mana to come up way ahead.

By this time, Linde had enough mana that he could simply bring the Dragon back from his graveyard every turn, then put it back in play if Marco was able to remove it. Linde then put the coup de grâce to Marco, Haunting Echoes. A huge segment of the Wake deck went off to where it would never be played again.

It didn't matter to Marco at all. The following turn he was able to Upheaval, floating 14 additional mana for Decree of Justice.

Matt Linde could do nothing but extend his hand. Marco Blume is the 2003 Grand Prix Atlanta Champion!