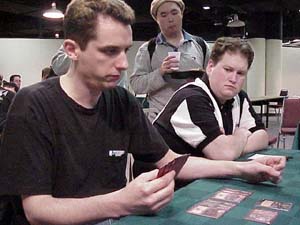 Matt Vienneau has had a lot of success in Invasion-block limited Grand Prix. He was #1 after the Swiss in Dallas and #1 after day 1 in Boston. He was still #1 when the dust cleared after Dallas and wound up 4th in Boston. He also made money at the Pro Tour Los Angeles. Brock Parker is an up and coming layer on Tour who has quietly established himself on the "gravy train" and has been steadily gaining respect by money drafting with his friends Matt Linde and Billy Jensen.

Vienneau was fed by Billy Jensen during the draft, who once again eschewed black/red and hooked Vienneau up with a nice red/black/blue deck. Vienneau was in turn feeding Brock Parker, who sat down to play against him in the championship match. Brock had almost half the white from the table (Dan Clegg had the rest and lost to Parker in the semi's). Parker's deck was a blue/white deck that (like almost everyone else at the table) splashed a little bit of black.

Parker started with Tidal Visionary and left it untapped for as long as it was in play, trying to punish Matt for any black removal spells he might be holding. Brock then played Silver Drake, gating Disciple of Kangee back into his hand. The Disciple hit the graveyard along with a Shackles when Vienneau's Nightscape Familiar fueled a turn 4 Thunderscape Battlemage with kicker. Vienneau then followed that up with a pair of Soul burns and suddenly Parker's two best creatures were gone (the Drake and a Stormscape Apprentice). Parker played out Angel of Mercy in an attempt to reestablish some offense, but Vienneau ruined his day with magma Burst (with kicker, of course). All Parker could say was "splendid" as his Angel and Visionary went to the graveyard. With the Visionary gone, Vienneau was able to use Plague Spores to nail Parker's next creature (Benalish Heralds) and his only Island. One Lava Zombie later, Vienneau was up 1-0 in the best 3 out of 5 match. 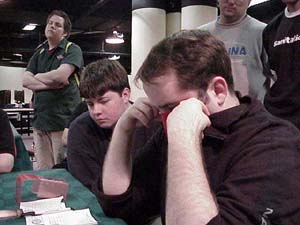 Game 2 took a while to really get started. Vienneau used a pair of Recoils to force Parker to play the same Silver Drake three times while Vienneau tried to draw land. Once Parker finally got a Silver Drake to stick in play, he played a second one. By then, however, Vienneau had the five land he needed to play Shivan Emissary with the kicker. Bye bye Silver Drake #1. Parker then had to use his Obsidian Acolyte to give Vienneau's Emissary protection form black so Vienneau couldn't use his own Nightscape Apprentice to put it back on top of his library. That Acolyte went on to dominate the game. Vienneau never could get it or the second Silver Drake off the table and suddenly the match was tied at 1.

After game 2, Vienneau announced that he lost because he forgot to play a land on turn 4. Not "forgot" as in "ha ha . . . I was mana screwed," but as in literally said "done" too quickly, before dropping the land that was in his hand. If he'd gotten to five a turn earlier he could have used his Emissary earlier and more effectively. (He also could have won by recursing the Emissary if he'd taken out the Acolyte the first time he played his Emissary! He didn't notice that the Acolyte could bust up his mondo combo.) 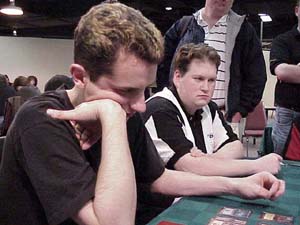 Having already made his trademark mistake(s) and given away a game, Vienneau hoped the Grand Prix would now be his. Parker had his Obsidian Acolyte again in game 3, but Vienneau Magma Bursted it off the table before it could do any damage. parker drew two swamps and no islands and had to just shake his head and say "done" for a few turns. Thunderscape Battlemage followed by two plains off the top of Parker's deck added insult to injury and they were on to game 4 in a hurry. 2-1 Vienneau. Ever eager to explain himself, Vienneau announced that he had kept an opening hand consisting of 6 land and a Morgue Toad in that game. He ridiculed Dan OMS for keeping a 6 land hand against him in a day 1 feature match and insisted that you always have to cash those in, but in this case (with a mana intensive deck and this deck against an opponent running Bog Down) he kept it.

Vienneau played black creatures on each of his fir three turns in game 4 and Parker held them all off with that pesky Obsidian Acolyte. Parker decided to tap out for Benalish Heralds on turn 4 and Vienneau promptly dispatched it with Shivan Emissary. parker then showed everyone one of the real reasons he was splashing black - Ertai, the Corrupted. Vienneau Magma Bursted away the Acolyte, Soul Burned a Dream Thrush for one, and suddenly Ertai was the only creature in play on Parker's side of the table. The game stalemated for a few turns until Matt finally drew an island. That once again gave him access to the old fashioned "guildmage my Nekrataal" combo - Nightscape Apprentice plus Shivan Emissary. 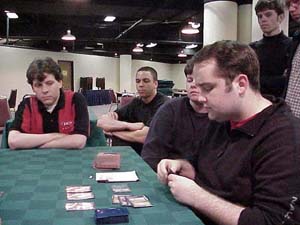 Parker tried to play Shackles on his own Shoreline Raider so he would have food for Ertai, but Vienneau responded with Rushing River. Parker sacrificed the Raider to counter it and played out a Stormscape Apprentice. When Ertai tapped and Brock out of cards, Vienneau went for the kill - Recoil send Ertai to the graveyard and Lava Zombie send Shivan Emissary back to Matt's hand. Angel of Mercy off the top of Parker's deck delayed the inevitable for a few turns, but recurring Emissary eventually slaughtered everything Brock could play.