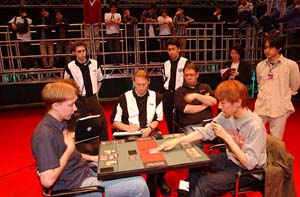 We've seen this before. At Pro Tour – Tokyo 2001, Tsuyoshi Fujita was the first-ever Japanese player to crack the Top 8, and he smashed his way to the finals. Now the rookie Masashi Ooiso sits at the final table, hoping to avenge Fujita's loss. It's like an impossible dream come true for Ooiso, who already had the lead in the Rookie of the Year Race going into the Top 8, now he stands a good chance of winning the event and putting a lock on that title. He already dispatched countryman Tsuyoshi Ikeda in the semis. Opposite him is Sweden's Mattias Jorstedt, who's on an indomitable hot streak. This is his third Pro Tour Top 8 in just four events, and now that he's shrugged off his quarterfinal jinx he's ready to take home the gold.

"I don't see too many Scandinavians in the crowd. They're probably off money-drafting." – Mattias Jorstedt

Indeed, the crowd was behind Ooiso almost one hundred percent. Jorstedt was quick to mulligan his first hand, but the next was acceptable to him. He was the first player on the board with Blade Sliver. Ooiso made a morph (Aphetto Alchemist) and was happy to trade. Jorstedt replaced his creature with a morph of his own.

The match proceeded in tense silence. Ooiso thought and then played his Master of the Veil face-up. Jorstedt's morph was forced to stay home. He made a second morph and passed it back. Ooiso made a morph and Goblin Sledder before giving it back to Jorstedt.

Wave of Indifference left just the Sledder able to block, and both the morphs swung in. Ooiso let them both through. Jorstedt flipped over Haunted Cadaver, stealing Ooiso's hand of Dreamer, land and Skyreaver. He let out a low whistle. Ooiso untapped, flipped over his Seaswift and swung back for four.

Crested Craghorn showed up for Jorstedt, and he assassinated the Seaswift. Ooiso's Master came back for two, but had no play. Jorstedt hit back with his morph and played Wretched Anurid. Ooiso had a Craghorn of his own, and Jorstedt almost scored a major coup as it looked like Ooiso would forget his Goblin Sledder. He didn't, though, and wound up Provoking away the Anurid.

Unfortunately, Ooiso was short on Action and Jorstedt pulled up a Sparksmith. The Master was forced to sit at home while the morph kept on hitting. Jorstedt made a Skirk Drill Sergeant, and again Ooiso had nothing. Then came Goblin Taskmaster, letting the Sparksmith shoot down the Master, and the floodgates were open. He bashed Ooiso low and turned over his Cadaver to clear out whatever mysteries were in his hand, taking the game. 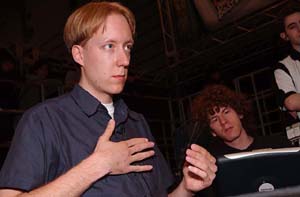 Jorstedt was happy to get rid of the dead weight from his deck. Thoughtbound Primoc and Anurid Murkdiver hit the bench in favor of Shaleskin Plower and Goblin Grappler. Ooiso kicked off the second game with Goblin Sledder, but that was undone when Jorstedt dropped a second-turn Sparksmith. Ooiso hit for one and played a morph.

Jorstedt shot the morph to get the Sledder off the table and played a Blade Sliver. Ooiso ran his morph into it, and replaced it with another. He winced as Jorstedt tapped a single mountain, showing a Sledder of his own. The 'Smith shot the morph and Jorstedt added a Wretched Anurid, bringing the beats. Ooiso put his hopes on a Master of the Veil. Jorstedt crumbled them with Crested Craghorn.

Ooiso didn't have any plays that could stand up to the 'Smith. Flamewave Invoker cost Jorstedt more life but his offense grew with a Vile Deacon. Ooiso had Covert Operative, at just eleven life, and Jorstedt spent a Death Pulse from hand so that he could get the extra damage in. Ooiso drew his card.

Ooiso shook his head, and packed up his cards. 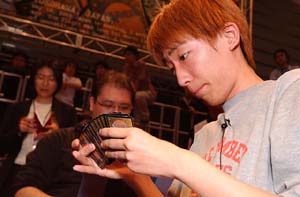 It was the same early game as Ooiso led with Goblin Sledder only to be bested by Jorstedt's Sparksmith. In between he made a Riptide Biologist. Faced again with the mighty 'Smith, Ooiso played another goblin, a Flamewave Invoker. The 'Smith forced the Sledder off the table, and Jorstedt made a morph.

Ooiso was stuck on three land and made no secret of how he felt about the situation. Unable to add anything to the board he was under heavy fire from Jorstedt's creatures while the 'Smith dismantled his board. Jorstedt could taste victory, sitting on a hand of two Shocks, Death Pulse and Chain of Plasma. Not even Lavamancer's Skill could save him. He suited up the Biologist regardless and took down a morph. Jorstedt dropped his hand on the table.