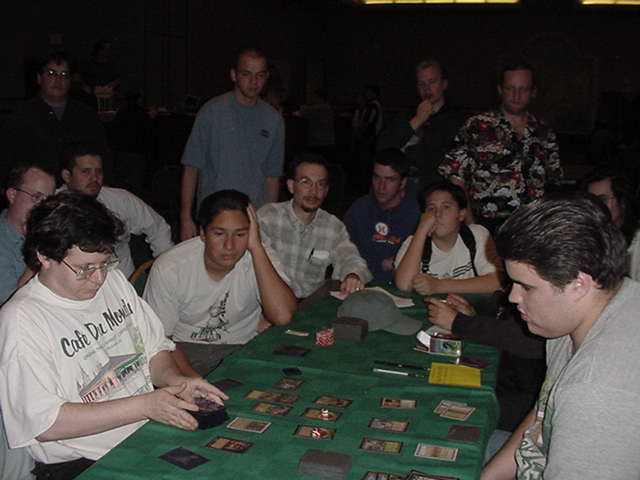 Only one man in the history of the game has won a Pro Tour, a Masters, and a Grand Prix championship: Mike Pustilnik. One of the true nice guys in the game, "Mikey P." sat down across from Adam Lane in the finals of Grand Prix Las Vegas to try for his second title. Lane barely edged out Alan Comer for the last spot in the Top 8 and has taken full advantage, with his quarterfinal and semifinal victories giving him first place in the Amateur competition and $1,500 in prize money from that purse. Win or lose in the finals he's taking home more money than Pustilnik. "Mongo" also had a bunch of his friends from Sacramento watching and cheering him on. 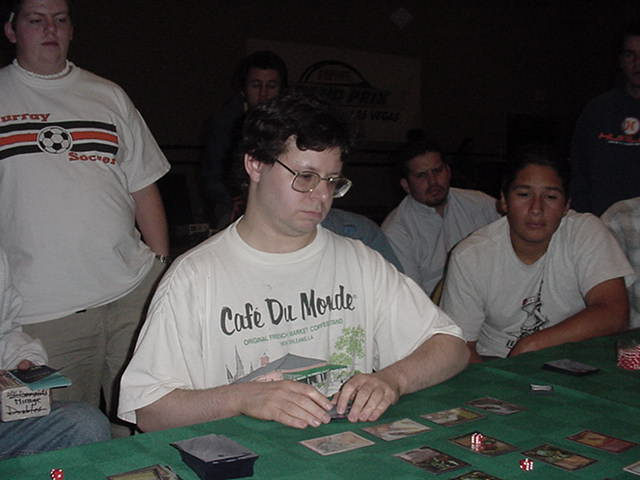 Lane ran a Three-Deuce deck this weekend. The red-green-white beatdown design has enough aggression to be good against control, enough enchantment removal to be good against Donate, and enough removal to be good against creature decks. Call of the Herd has breathed fresh life into this archetype, which has been around for several years. Pustilnik is playing "The Rock and his Millions" - a green-black deck designed by Sol Malka several years ago and lovingly tuned by Malka for every incarnation of Extended since then. Interestingly, the two copies of The Rock were the only decks in the Top 8 that didn't use Call of the Herd, choosing instead to stick to utility 3-drops including Spike Feeder and Yavimaya Elder. Pustilnik also ran Yavimaya Elders when he won (the Urza-block Constructed format) Grand Prix Memphis. 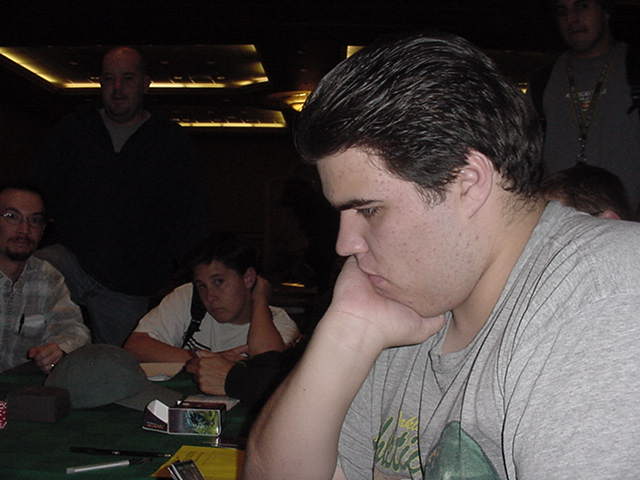 Lane was the aggressor early in game 1. He summoned forth River Boa, two elephants, River Boa #2, and Mogg Fanatic over the first five turns. Pustilnik did his best to hold off the beats with a pair of Spike Feeders. Pernicious Deed allowed him to stabilize at 5, plus his remaining Spike Feeder had four counters on it. Living Death then gave him a huge advantage, sending his life total to 13, killing two Boas, and bringing back both his Feeders. Spiritmonger came down next and forced Lane to commit everything he could to the board. Pernicious Deed #2 then destroyed any hope Lane had of a comeback in game 1.

Between games the players learned that Mike Flores had just finished winning the Sunday PTQ with the same deck Pustilnik was using to try to win the GP. Both players seemed to think "Doctor P" would make it a weekend sweep for The Rock and his Millions, since they had played in the Swiss with the same results as in game 1. 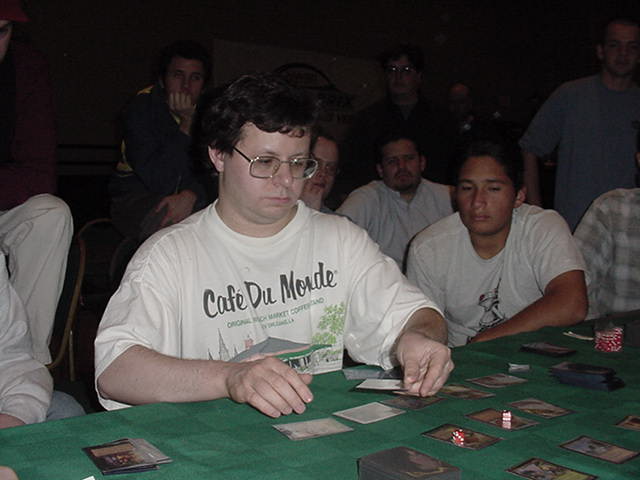 Lane mulliganed away zero creature draw in game 2 and wound up with land, 3 1-drops, and a Wax/Wane.

However, Pustilnik's cards just made that draw look silly: Wall of Roots and Yavimaya Elder stalled and then Spiritmonger came out on turn 5. "Mongo" used a Wax/Wane and Granger Guildmage and sacrificed two Mogg Fanatics and then announced triumphantly "I killed a Spiritmonger!" The crowd cheered along with him, but then groaned when Pustilnik played another one. Spiritmonger #3 from Pustilnik met with laughter and everyone knew the last few turns were academic as Mike Pustilnik added a second Grand Prix title to his increasingly impressive resume.