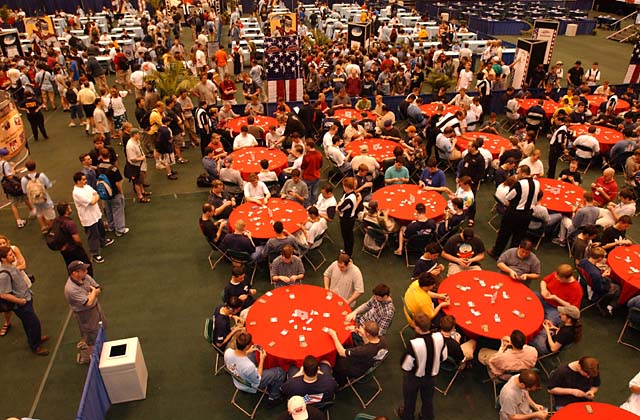 Michihisa lead off with Duress, taking Counterspell, and kept the pressure up with Gerrard's Verdict, netting a Fact or Fiction and Underground River. His third turn Nantuko Shade gets countered, but Mitsuya is unable to unable to stop a 4th turn Braids, Cabal Minion. Shaken, Mitsuya played Fact or Fiction, hoping to draw something to get rid of Braids, and instead finding Counterspell, Nightscape Familiar, Force Spike, an Island, and a Swamp. Onoda put the Familiar and Counterspell into a pile, but, after thinking for a few moments, Mitsuya goes for the other pile.

Replacing the land he sacrificed to Braids, Mitsuya plays Deep Analysis, still looking for a Repulse. Onoda starts swinging with Braids, and keeps tempo with a Phyrexian Rager. Getting desperate and unable to get more than four lands on the table, Mitsuya flashes back the Analysis, but is still unable to get anything to stop the pain. Onoda chose to sacrifice the Rager, and tried to keep the pressure up by playing Ravenous Rats, but they were stopped by two Force Spikes. Mitsuya is able to blunt Onoda's offensive with a Nightscape Familiar and Psychatog, which prompts Onoda to get rid of Braids. Onoda played another Rager, which is used for chump duty the next turn when the Psychatog is sent over. Mitsuya stopped another Braids with a Force Spike and began slowly building up lands, but has few card to take advantage of them. Trying to keep the pressure on his opponent, Onoda played two Ravenous Rats, then used Chainer's Edict, forcing Mitsuya to get rid of his Familiar.

Looking for the missing piece of his combo, Mitsuya starts going through his deck with Cephalid Coliseum. Hoping to keep Mitsuya from getting enough lands to play Upheaval, Onoda plays another Braids. However, she joins the Rats the next turn on chump duty against the Psychatog. Needing to get a damage source on the table, Onoda tries to play Ichorid, but Mitsuya is able to buy a turn with Memory Lapse. The next turn, Onoda tests the waters with a Nantuko Shade and, after it gets through, follows it up with a Rats, forcing Mitsuya to discard his only card--an Upheaval.

Giving up on the combo, Mitsuya switches to beatdown mode, making another Psychgatog. Onoda double-blocks one of them, forcing Mitsuya to get rid of his entire graveyard to kill the Shade. With Mitsuya at 12 life, Onoda reponded to a third Psychatog with the Ichorid he'd been holding onto. Trying to go for the kill, he brought out a second Ichorid the next turn, but it got stopped by a Counterspell. At 6 life, Mitsuya swings, leaving one 'tog behind for defense. This attack drops Onoda's life down to 8. Onoda played Gerrard's Verdict to keep Mitsuya's hand empty, then dropped Shambling Swarm. Not willing to go down without a fight, Mitsuya gets lucky and topdecks Engineered Plague, naming "Horror" to keep the Ichorids off his back, and making the Swarm a little more manageable at the same time. Not letting Mitsuya catch a breather, Onoda plays a Shade.

The next turn saw Onoda make a poor decision that eventually cost him the game. After some deliberation, he chose to use the Vindicate in his hand on one of Mitsuya's two Psychatogs. Leaving the Swarm behind to chump if necessary, he attacked with the Shade, which got eaten by the remaining 'tog. Onoda tried to get rid of it by flashing back Chainer's Edict, but Mitsuya foils that plan with Circular Logic. Onoda attacks with the Swarm, bringing Mitsuya to 1 life, and the next swing forces Mitsuya to get rid of his hand and graveyard to keep the Psychatog alive. Onoda's offensive stalls at this point as he hits a deep land pocket in his deck, and the 'tog starts slowly nibbling on his life total. The Psychatog is saved from an Edict by Repulse. Not drawing anything, Onoda conceded when Mitsuya played another Psychatog.

When a spectator pointed out that, had he gotten rid of the Engineered Plague with Vindicate, he could have brought back both Ichorids, Onoda's normally expressionless face contorted as he realized his blunder. Shrugging his shoulders as he began shuffling his deck, he tried to let it go, but it was clear he was angry at himself over the miscalculation. Was the pressure of the Finals getting to him? 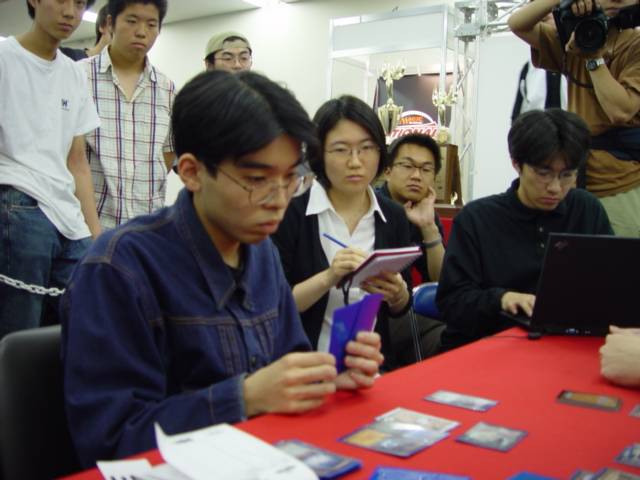 A second turn Duress from Onoda again netted a Counterspell. Ignoring Mitsuya's second turn Familiar, Onoda played his deck at his own pace, putting out Phyrexian Arena. Wanting to finish the game before Onoda outdraws him, Mitsuya goes for a quick game with a third turn Psychatog. A Phyrexian Rager from Onoda gets countered by Circular Logic, and atog beatdown commences. Another Rager is responded to with Fact or Fiction, revealing Psychatog, Force Spike, another FoF, Nightscape Familiar, and Swamp. Onoda puts the FoF and Familiar into one pile, which Mitsuya takes. Continuing to attack, Mitsuya makes plays the Familiar he got with Fact or Fiction for defense against a possible Ichorid. Struggling to take back control of the game, Onoda plays Braids, which Mitsuya responds to with another Fact or Fiction. This time, Onoda's choices are Underground River, Island, Repulse, Nightscape Familiar, and Psychatog. Onoda chose to put the Familiar and the Repulse together, which Mitsuya took, immediately bouncing Braids. The next turn's attack saw Onoda's Phyrexian Rager get eaten by the Psychatog. With his life dropping into the single digits from his Phyrexian Arena and repeating pings from Mitsuya's Familiar, Onoda conceded on the next turn after his top two cards turned out to be lands. 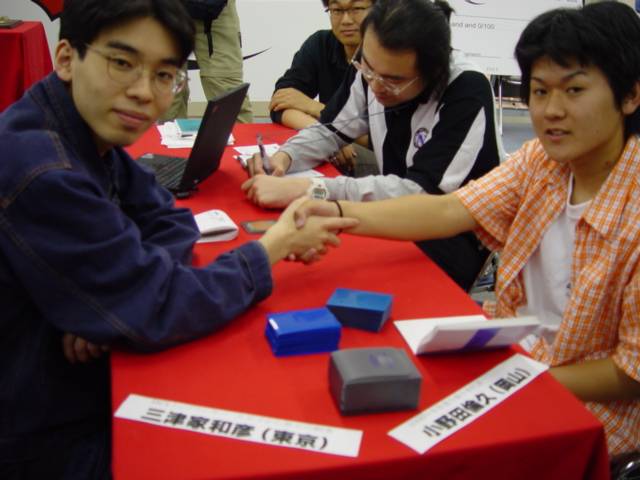 The third game started a little slowing than the first two, with nothing happening until the third turn, when Onoda's Duressed away a Memory Lapse, following it up with a Gerrard's Verdict that made Mitsuya get rid of 2 Circular Logics. Onoda played Braids the next turn, which was bad news for Mitsuya, who was stuck at three lands. Hoping to ameliorate the lack of lands, Mitsuya made two Familiars in a row, while Onoda continued to work on his hand with Ravenous Rats and Duress. Drawing an Engineered Plague, Mitsuya takes Braids down a notch by naming "Minion", and starts attacking with his Familiars.

Onoda gets lucky and draw an Ichorid, which will stick around for a few turns with all the Rats in the graveyard. Looking to find a way out of the hole he was in, Mitsuya uses Fact or Fiction to get some land. Onoda played a Phyrexian Arena, looking to outdraw his opponent and keep the threats coming. More Rats chew up cards in Mitsuya's hand, and give Onoda more fodder to recycle Ichorid with, while Mitsuya remains stuck at two lands thanks to Braids. Running low on land himself, Onoda eventually sacrifices Braids to itself, but keeps Mitsuya on the ropes by getting rid of one of his Familiars with a Chainer's Edict. Mitsuya finally got his third land on the table and tapped out for Deep Analysis, thinking he might be able to turn the game around, but Onoda topdecked another Ichorid and swung for the win.

In what was by now a familiar pattern, Onoda lead off with Duress again, grabbing a Force Spike, then making an early threat in the form of Nantuko Shade. Mitsuya is having a pretty bad start, with a Sulfur Vent and two painlands as his only lands, as he sits on a handful of counters. Looking to slow Onoda's offensive, he makes a Psychatog, but it gets Edicted away. While the Shade works on Mitsuya's life total, Onoda works on his hand, Duressing away a Counterspell. Desperate to stop the Shade, Mitsuya played a Familiar, which was met with another Shade from Onoda. Staring down two Shades, Mitsuya finally got a fourth land--a Swamp--and played Deep Analysis, hoping to draw something that would turn the game around. Things only got worse when Onoda played Braids the next turn. At 8 life with one blocker, with two Shades on the other side of the table, things were not looking good for Mitsuya. Unable to draw another blocker or land, he scooped.

Mitsuya started the deciding game with a decent hand, having a Nightscape Familiar, 2 Psychatogs, and 4 lands. He got the Familiar out, but lost an atog and a Repulse to a second turn Gerrard's Verdict. The next turn, the backup Psychatog hits the table, while Mitsuya jokes that he's really supposed to be playing a control deck. Onoda tries to knock some more cards out of Mitsuya's hand, but the Verdict is delayed with Memory Lapse. The next turn, when Onoda attempted to play Vindicate on the Psychatog, Mitsuya stopped it with Counterspell. Finally emptying Mitsuya's hand with the Verdict, Onoda played an Edict, which got rid of the Familiar.

Forced into topdeck mode, Mitsuya hits a land pocket starting with Cephalid Coliseum, which allows Onoda to play Ichorid. Mitsuya eventually starts drawing real cards again, but as soon as he kept a card in his hand, Onoda hit him with Duress, while upping the ante with another Ichorid. Mitsuya gets another Psychatog, while Onoda plays Braids. Mitsuya starts getting rid of some of his ample supply of land while swinging with both Psychatogs, eventually forcing Onoda to chump with Braids. A few turns later, Onoda 's life is low enough that one hit from a fattened-up atog will finish him. He tried to set up a defense with two Shades, but Mitsuya sealed his victory with an end-of-turn Repulse.