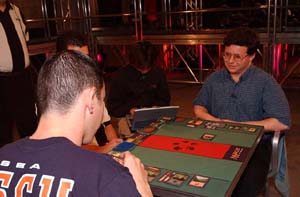 Mike, a native of Brooklyn, is somewhat of a limited format specialist, with a win at Pro Tour LA last season. Chris Benafel, from Eugene, Oregon is a member of the successful ABU Team. He has the reputation of finishing second in lots of Premier Events including Pro Tour LA 1999, GP Dallas, GP Turin, and US Nationals. Grand Prix Amsterdam this year is the only premier event that he has won.

Chris won the dice roll and elected to go second. Benafel had to take a mulligan as his opening draw was six lands and a Flame Burst, and the Burst might not even kill Mike's first creature, especially if it was a Wild Mongrel. His second hand was rather better - two Flame Bursts, a Firebolt, and a Barbarian Lunatic.

Mike dropped a Wild Mongrel on the second turn but didn't play anything on the third. Benafel summoned the Lunatic, and it didn't block. Pustilnik had drawn his combo, and he discarded a Roar of the Wurm before flashing it back.

Chris played a Patriarch's Desire on the Wild Mongrel then sucked up six damage from the Wurm, going down to nine. Mike played a Krosan Archer and then Chris summoned a second Barbarian Lunatic. Pustilnik used a Volcanic Spray to kill Chris's blocker and knock him to eight, then attacked for the game.

"I don't want to see that draw again," Chris said. 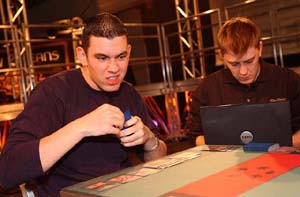 Benafel was happy to not see a second turn Wild Mongrel this time. In fact Mike's draw seemed a lot worse than in the first game, as his first play was a third turn Leaf Dancer, which was Firebolted, and then a fourth turn Nantuko Disciple which was Innocent Blooded.

Mike was out of larger creatures and he just summoned a Diligent Farmhand. It was joined by a second Farmhand on Mike's next turn. Chris used Engulfing Flames to kill one of the Farmhands, and attacked with a Pardic Firecat.

After a short think Pustilnik just summoned a Cartographer and passed the turn, suggesting that his hand was pretty poor. He had enough mana to cast Roar of the Wurm but didn't have it. Chris kept asking whether Mike had it or not, and when he was going to cast it.

When the Pardic Firecat attacked again Mike blocked it on his Farmhand and sacrificed it for another Swamp. Chris wondered why he wanted so many swamps, and Mike explained that it was for Cabal Patriarch, although it was actually for Zombify. Pustilnik then summoned a Springing Tiger and that when Chris used his Firebolt in the graveyard and his Pardic Firecat to kill it, the board was clear. 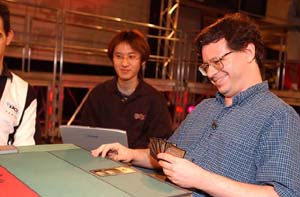 It didn't stay that way for long, though, since Mike played Roar of the Wurm. Benafel did manage to deal with it by Recouping his Innocent Blood, but it looked as though the Wurm's flashback would be tough for him to deal with.

Mike didn't even decide to use the Roar of the Wurm right away, instead he used Zombify to fetch back Springing Tiger and then played a Werebear. Both creatures had Threshold. Chris managed to destroy the Werebear with a Ghastly Demise, but he couldn't stop the Tiger and took five going to fourteen.

Mike added the Roar of the Wurm and Chris spent rather a long time on his turn before just casting an Anarchist. Even though his position was hopeless Chris still found the energy to entertain the crowd with jokes. He had to chump-block the Wurm, but the Tiger got through again knocking Chris to nine and he had to concede on his next turn as he drew nothing that could block.