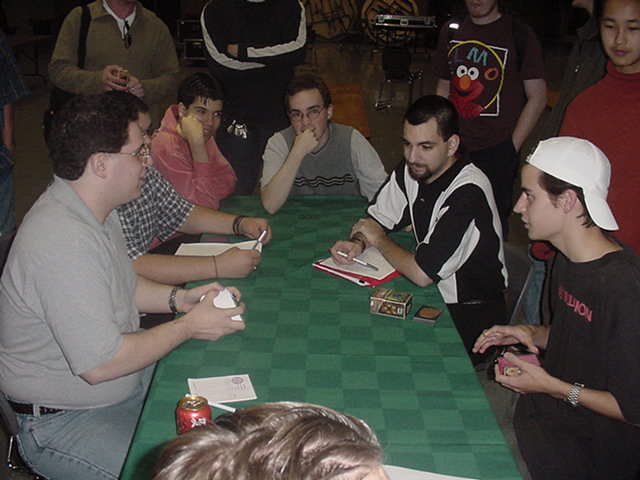 This final comes at the end of a great weekend in Montreal. The CMU potato, Mike Turian, is looking to extend upon his impressive streak as of late, with an illusive grand prix win that would like very nice on his already lengthy resume. Canadian bad boy Louis Boileau is looking to take this one down for the hometown crowd here in Canada. This is Boileau's second grand prix, and it makes his second top 8, so chances are high that we'll see some more high finishes from him in the future. This matchup seemed to favor Turian, regarded by many as one of the premier Rochester drafters in the world. His aggressive red/green deck featured a number of bombs, among which were Kamahl, Pit Fighter, and Savage Firecat. These two cards make great finishers when backed up with such aggressive cards as Muscle Burst, Demoralize, Reckless Charge, and Wild Mongrel. Boileau also had some very powerful spells, including two Kirtar's Desires, two Morbid Hungers, and a Cabal Patriarch. The trick for Boileau would have to be to stabilize the board to put these spells to use before Turian burns him out of the tournament. 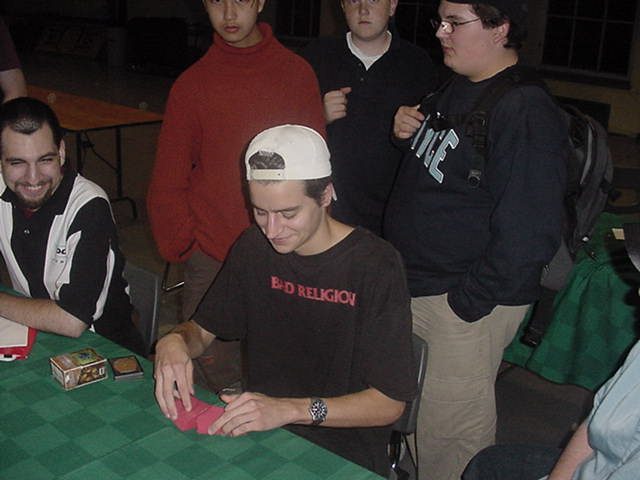 Game one started off with both players cracking some jokes to loosen the tension. Boileau started talking a little trash as the Potato was forced to mulligan. "Better to know how to shuffle than how to play!" said Boileau as Turian was forced to mulligan for a second time. The crowd was pretty much ready to watch game two, as absolutely no one comes back from a double mulligan...do they? Well, apparently Turian had other ideas in mind for game one. After double mulliganing, he was forced to keep a hand of four land and Kamahl, Pit Fighter. Boileau started off fast with a Crypt Creeper and an Auramancer, reducing Turian's life total to 14. Turian then layed his Rampant Elephant to stave off the forces of Boileau which now included a Resilient Wanderer as well as the two bears. Boileau was forced to sit back a turn and cast another dork as he didn't have a removal spell to off the elephant. Turian drew and was happy to see another creature, as he cast the freshly drawn Ember Beast from his deck. Boileau was forced to hold back again as he passed the turn to Turian. This time Turian drew another goodie from his stack of gas. A freshly peeled Shower of Coals took out the Creeper, and the Auramancer, as well as did two damage to the face of Boileau after Turian had attacked for six with his creatures. Boileau attacked back to put Turian at 9, and then played an Aven Flock. Turian drew, hoping for a sixth land so he could lay Kamahl, but instead drew a Wild Mongrel. Turian attacked with his elephant and beast, and Boileau blocked with his Aven Flock. Turian could have elected to Muscle Burst his beast to finish the flock, but instead chose to use his one green mana to play Wild Mongrel, as he had a Demoralize in his hand and was looking to finish Boileau off fast. Boileau attacked with his Flock, and played Kirtar's Desire on Turian's elephant. Turian drew his sixth land on his turn and layed Kamahl. He passed the turn to Boileau, who attacked with his Flock yet again after some thought and passed the turn. Turian used Kamahl to reduce Boileau's life total by three during Boileau's endstep. Turian then cast a Demoralize for the potential win on his turn, only to have Boileau cast a Second Thoughts on his Wild Mongrel. Unfortunately for Boileau Turian had the aforementioned Muscle Burst for the final six damage, and the incredible comeback win. 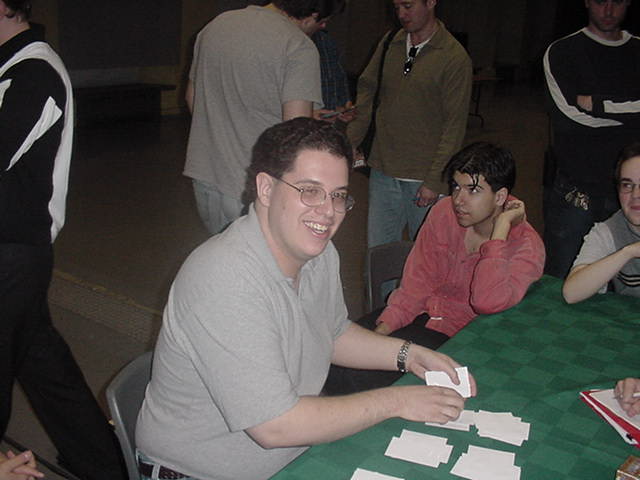 Boileau appeared to be shaken after losing to Turian's double mulligan game one. Both players kept their hands, and play began. Boileau stopped playing land after his second turn, while Turian layed the beats in the form of a Cartographer and a Pardic Firecat. After using Reckless Charge to reduce Boileau's life total to very low digits, Turian played out Savage Firecat. Louis managed to draw his third land, but a 7/7 trampler is pretty tough to deal with, especially for someone who has a mere three land. The Firecat forced Boileau to extend the hand, making the CMU Potato, Mike Turian the Grand Prix Montreal Champion.