Coming into this weekend, Gaudenis Vidugiris had some work to do. Despite a Pro Tour Top 8 last season, the way the new Pro Points rewards levels were counted he needed a strong finish to keep Gold status and remain qualified for the Pro Tour. Fast forward a few days, and he's one match away from locking up Platinum status, a Pro Tour Championship, and a spot in the prestigious Players Championship.

Across from him, Canada's Alexander Hayne was also riding high on his performance this weekend. He found himself the Captain of Team Canada, and his Top 8 came with Platinum status attached thanks to his year. Not only that, he had secured Rookie of the Year and won a match against Jonny Magic himself. Now there was only one mountain left to climb: winning the Pro Tour.

Before the cameras even started rolling, Vidugiris had mulliganed down to five. He opened with Forest and Avacyn's Pilgrim, but had no second land to follow up. He swung for 1 and passed. Hayne fetched out a Plains, added an Island, then played Feeling of Dread on the Pilgrim during Vidugiris's upkeep.

Vidugiris drew Cavern of Souls, and named Human to get out an Invisible Stalker. Hayne played a third land and passed. Vidugiris played Abundant Growth, then tapped his land and Pilgrim for Spectral Flight on the Stalker. Hayne cast Think Twice at end of turn, then untapped and got his first miracle: Devastation Tide. 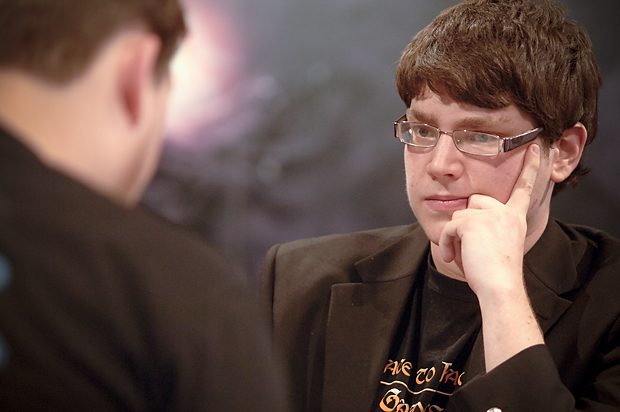 Alexander Haynes gets his first miracle of the match in the form of a cheap Devastation Tide.

Vidugiris rebuilt with the help of an Island, getting both Stalker and Pilgrim back into play. Hayne played a second Island, passing with five mana open. Vidugiris played a second Cavern of Souls, this on Spirits, and cast Strangleroot Geist and Spectral Flight on the Stalker. Both resolved, and he attacked Hayne down to 10. Unfortunately for him, Hayne had a sixth land and Terminus to knock him back to the stone age.

All Vidugiris was an Abundant Growth. Next came Tamiyo, the Moon Sage, locking down the Growth'd island. Vidugiris played a Forest but had nothing to do with his four mana. Hayne continued to tick up Tamiyo. Another blank turn for Vidugiris. Tamiyo climbed to seven, and Hayne played Entreat the Angels for full price, getting two angels for seven mana. All Vidugiris had was an Invisible Stalker. Hayne hit for 8 and Entreated for two more angels, threatening lethal the following turn. Vidugiris was unable to stop him.

The arrow of fate swung the other way for the second game, with Hayne mulliganing his first three hands before sighing with a little laugh and keeping four.

"It's not getting better than this." 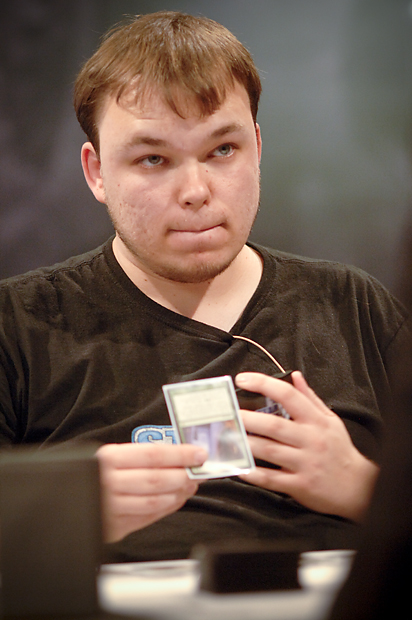 Vidugiris presses his advantage against Hayne, who needs more than a few miracles to recover from a mulligan to four.

Vidugiris kicked off with Invisible Stalker. Hayne played two Plains and stopped playing permanents. Vidugiris played a Cavern of Souls on Warriors and tapped four for Garruk, making a Wolf. Still nothing from Hayne. Increasing Savagery on the Invisible Stalker brought Hayne to 11, and after he passed his turn, Vidugiris flashed him the second Savagery. Hayne scooped.

It was another rocky start for Vidugiris, mulliganing down to a five card hand on the draw. He had Invisible Stalker on turn two, but Hayne pulled ahead with a miracled Termporal Mastery. Two turns later he passed with four mana open. Vidugiris went for Spectral Flight on his Stalker and hit for 3. Tamiyo, the Moon Sage locked down his third land.

Vidugiris knocked Tamiyo down to two loyalty, then played a fourth land and passed. Hayne kept the land tapped and played an Evolving Wilds. Vidugiris played Strangleroot Geist and went to attack, but Hayne had effects. He fetched a plains and flashed back Think Twice, but there were no miracles waiting. Vidugiris killed Tamiyo with the Stalker, and the Geist dropped Hayne to 15.

Hayne untapped and Entreated a pair of angels into play. With four lands at his disposal, Vidugiris took a moment to think. He eventually swung in with both his creatures. As expected, Hayne blocked the Geist and went down to 12. Vidugiris played Avacyn's Pilgrim and passed.

Hayne found another miracle, this time Entreat the Angels for four. Vidugiris put the breaks on that with a Dissipate. Hayne hit for 8 and passed with two mana open, then played Feeling of Dread on Vidugiris's upkeep, tapping down the Geist and Pilgrim. Vidugiris hit him to 9. Another Entreat the Angels was on top of Hayne's deck, and this one resolved. His first two angels brought Vidugiris down to 4, and the flashback on Feeling of Dread was enough to take the game. 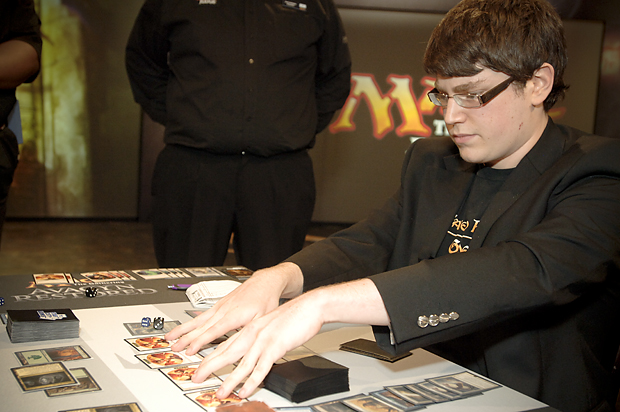 Hayne's miraculous Entreats summon him an army fitting for a deck named "Hallelujah"."

As they shuffled the players commented on the excess of mulligans. Perhaps shamed, their decks served up acceptable hands for the fourth game.

Vidugiris led out with Forest and Cavern of Souls for Strangleroot Geist, it hit for two, but a Terminus on the top of Hayne's deck banished it. Hayne played Evolving Wilds and passed. Vidugiris played Abundant Growth and a second Strangleroot Geist, putting Hayne to 16. Hayne flipped up Temporal Mastery and spent his turns playing lands.

Vidugiris untapped and went into the tank. He emerged with the following plan: Forest, Increasing Savagery on my Geist, attack. The Savagery resolved, but Hayne had Feeling of Dread to stop the damage. He played a fifth land and passed the turn. Vidugiris went to attack again, and after Think Twice turned up no miracle, Hayne flashed back Feeling of Dread.

Vidugiris took his time. He tapped five for Wolfir Silverheart and passed. Hayne played his sixth land and laid down Terminus. Vidugiris had more gas in the tank, but he would need to act fast before Hayne's big spells could take over the game. He dropped Geist of Saint Traft, and got a reprieve when Hayne had to play two main phase Think Twices in search of a seventh land he never found.

Vidugiris pondered how best to use this opportunity. He swung with Geist of Saint Traft and its faithful angel companion, putting Hayne to 10 and played Avacyn's Pilgrim. Hayne played a seventh land and cast Entreat the Angels for two. It resolved. Vidugiris considered acting at the end of his turn but chose not to. He untapped and played Increasing Savagery on the Geist and attacked. The two angels blocked the Geist, one of them dying to be rid of the it. Hayne fell to 6. 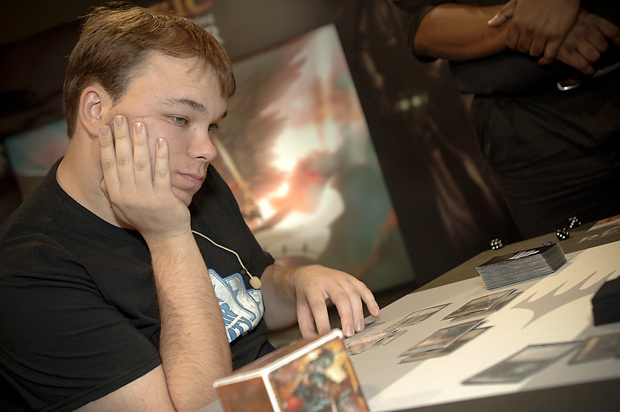 Vidugiris contemplates all of his options, along with all the scenarios that could go awry for him if the wrong card was on top of his opponent's deck.

Hayne looked like he had weathered the storm. He hit with his angel token and passed the turn with eight mana open. Vidugiris used his Cavern of Souls to force through a replacement Geist. Hayne Thought Scoured at end of turn, then untapped, but did nothing but play land, holding back his Angel. Vidugiris had a Wolfir Avenger at end of turn. Hayne had Feeling of Dread, and Vidugiris didn't want to lose his Geist. He tried a Garruk Relentless, but this met Dissipate.

Next Hayne dealt with the Geist by playing one of his own. He cast Temporal Mastery for full price and knocked Vidugiris to twelve. He took his extra turn, played an Evolving Wilds, and passed. Vidugiris thought hard before announcing his attack step. Hayne fetched out a land and flashed back Think Twice. There was no miracle. He flashed back Feeling of Dread. Vidugiris made no further play. Hayne untapped and cast Tamiyo, the Moon Sage. He chose to draw two cards, then Thought Scoured himself. He passed the turn with six mana open. Again Vidugiris paused at the end of turn. This time he went for another Wolfir Avenger. It resolved.

Vidugiris untapped and played Wolfir Silverheart. He bonded it to one of his Avengers, and sent that one and his Pilgrim at Hayne, and the smaller Avenger at Tamiyo. Hayne was forced to chump the big Avenger and lost Tamiyo. He slowly lifted his top card and revealed Temporal Mastery. Unfortunately it wasn't the miracle he needed. He got one more shot. He drew and passed the turn. When Vidugiris swung in he flipped over a hand of lands and scooped up his cards.

"It's only fitting that it goes to game five." - Alex Hayne

Hayne was quick to send back his opening seven, and while he shuffled, Vidugiris considered a mulligan of his own. Eventually he chose to keep. Hayne stayed on six, and they waited for the cue to begin.

Vidugiris answered Haynes plains with an opening of Forest, Avacyn's Pilgrim. His tough decision over the mulligan was unmasked when Hayne played Feeling of Dread to tap his Pilgrim and Vidugiris had to pass without playing a land.

Hayne had a third land and tried to get another Time Walk out of Feeling of Dread. This time Vidugiris had drawn Hinterland Harbor, but still could do nothing. Hayne miracled a Temporal Mastery, but revealed that he had no fourth land. He found one on his extra turn, and passed. He tried Think Twice on Vidugiris's upkeep, but there was no miracle. He played a second Feeling of Dread from hand. Vidugiris played Spectral Flight on his Pilgrim and passed.

Hayne dug with Think Twice on his main phase, played a land and passed. In Vidugiris's upkeep he went for Thought Scour, but was still without miracles. He flashed back Feeling of Dread and Vidugiris was forced to discard having missed yet again on lands. Things got worse for him when Hayne dropped Tamiyo, the Moon Sage and locked up the Pilgrim.

Vidugiris ripped Evolving Wilds and passed, getting a plains after Tamiyo went up to six to keep the Pilgrim down. Vidugiris tried Geist of Saint Traft, but Snapcaster Mage on a milled Dissipate took care of it. He played the Forest he'd drawn and passed. Hayne untapped and flashed back his Think Twice. Tamiyo crept up to seven loyalty. He hit for 2 and passed.

Vidugiris had another Geist, and this one resolved. Hayne tried Think Twice at end of turn but came up empty. He did however get his second plains. He chose to switch focus to Hinterland Harbor, Vidugiris's only source of blue mana, and then cast Feeling of Dread on the Pilgrim during Vidugiris's upkeep. Vidugiris cast Strangleroot Geist and swung out at Tamiyo. Snapcaster took out Geist and Tamiyo was down to just two loyalty.

Hayne played Think Twice at end of turn, then untapped and found what he was looking for waiting on top of his deck: Entreat the Angels.

Suddenly he had twenty power of fliers in the air. Tamiyo took care of the Pilgrim and Hayne passed back to Vidugiris, knowing victory was within reach. Vidugiris frowned at the board. He cast Increasing Savagery on his Strangleroot Geist and attacked Tamiyo, hoping to induce a block. Hayne let it by and Vidugiris offered him the handshake. 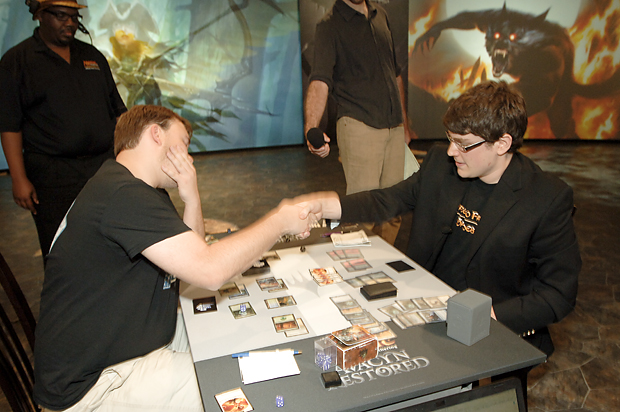 A roar erupted from the Canadian contingent watching from the sidelines. As Scott Larabee came on stage to present the champion's trophy, they broke into a rousing rendition of Leonard Cohen's "Hallelujah" in celebration of their countryman's victory. 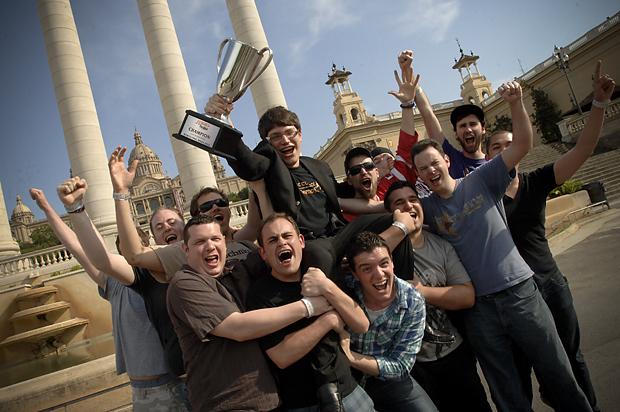