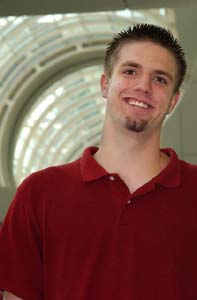 This is it – the final match that will determine which of these competitors wins a free year of college, and which will simply be able to make half of their tuition payment without asking their parents for money. Imagine having Magic pay for your college education! Soon, this will become a reality for one of these lucky kids – although perhaps kids isn't the right word, since Mitch is taller than many, and has more facial hair than some of the judges at this event.

Mitch led with a Forgotten Cave, and Sam countered with a forest and a Basking Rootwalla. Both players seemed strangely calm under the scrutiny of lights, cameras, and a huge audience, though Mitch kept shuffling his cards back and forth nervously whenever he had a free moment.

Mitch took a point of damage from Sam's attacking Rootwalla, and then sacrificed his Windswept Heath to get a plains, leaving himself at 18. He then cycled a Renewed Faith to put himself back up to 20. Sam played a Wild Mongrel on his second turn, then attacked on his third to bring Mitch down to 15 life. He didn't play a third land, though, and passed the turn instead.

Mitch sacrificed another Heath to get a forest this time, and triumphantly cast a Wrath of God. He looked much calmer and much more in control after that huge spell. Mitch then played and sacrificed a Wooded Foothills, going to 13 life, and found a Mountain this time. Mitch's next play was an Astral Slide, and he passed the turn.

Sam attacked with his Wild Mongrel, then cast a Volcanic Hammer to take Mitch to 8 life. Mitch, running out of options and life to play with, slammed down a Teroh's Faithful to pull himself back up to 12 life. Sam played a mountain on his sixth turn, only his third land of the game, and perused his options for a minute. Shuffling the cards in his hand back and forth like so many practiced players, he tapped his forest and his Mossfire Valley for a Basking Rootwalla and a Grim Lavamancer. Sam followed that up with a Firebolt at Mitch's face to take Mitch 10, but Mitch was ready for it.

Mitch cycled a Forgotten Cave and slid out his Faithful, gaining four life when it came back at the end of his turn. Mitch played a face-down morph creature and cycled a Renewed Faith, sliding the morph out and bringing Exalted Angel back in. Sam threw an Elephant Guide on his Wild Mongrel and swung, bringing Mitch to 11. 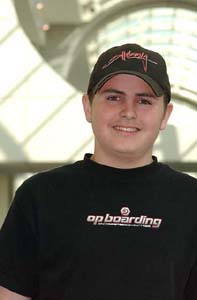 However, when Mitch swung with his Exalted Angel and cycled out another Renewed Faith, Sam realized the situation was hopeless and conceded rather than prolonging the inevitable.

Sam's first play was a Grim Lavamancer, and Mitch countered with a first-turn Grand Coliseum. Sam attacked on his next turn, and hit Mitch with a Volcanic Hammer, but couldn't find a source of green mana. Mitch, meanwhile, played an Astral Slide on his third turn – how thoroughly lucky! Even though he was at 11 life by the time he played it, getting a third-turn Slide is not terrible.

Sam kept throwing more and more burn at Mitch's head, with another Volcanic Hammer and two Firebolts bringing Mitch's life total all the way down to 5. Mitch responded with a Teroh's Faithful, though, to go back up to 9, and then played and sacrificed a Windswept Heath to get a Plains. His only source of white mana up until this point was that Grand Coliseum.

Sam drew his card, and declared an attack phase. He opted not to attack, went to his second main phase, and realized that he's not drawn a single green source this entire game. Rather than drawing things out, Sam decided to concede and extended the hand.