In an initial field of 70 players (over 50 of whom were still playing on Day 2), two players decided on Saturday morning to play Stompy. Sunday afternoon those two players met in the championship match. 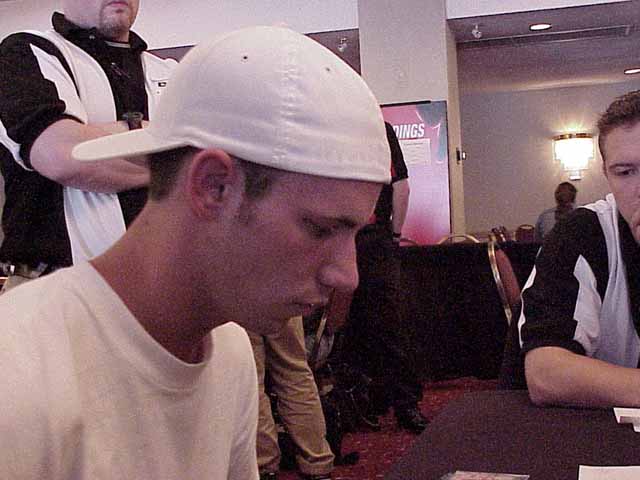 Ryan Fuller is a seasoned professional player who had stopped playing about 6 months ago, but was lured back by all the new prize money. "I hadn't played a match since L.A., but I saw my friend Chris Benafel make Top 8 at US Nats and another friend made Top 8 at Grand Prix Copenhagen, so I figured hey, my friends are still good, I'll give it another shot. And once I started playing again, I loved it. I love playing cards. Now my girlfriend and I are going to go live in Europe for a while. We'll start in Brussels [for Worlds] and then hit some Grand Prix." 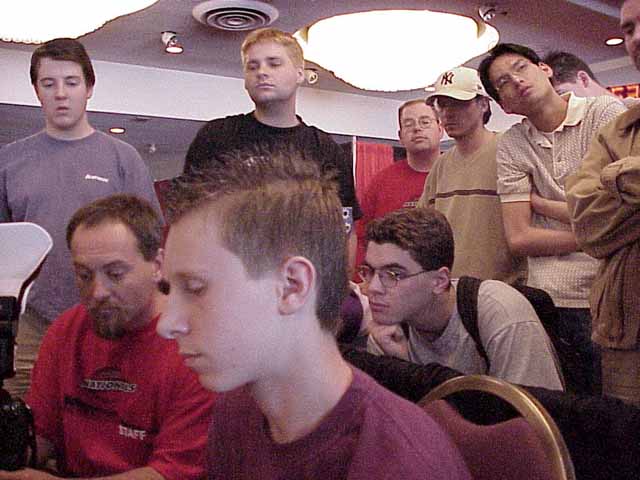 Murray Evans, on the other hand, is a thirteen year old kid with no Pro Tour experience, but an equally big love of the game. He's still got three years of Junior Super Series eligibility, but he's about to give all that up so he can move up to the big time and represent Canada at Worlds. Evans picked up his nickname - "Murray the Mauler" - when he beat Olle Rade in a side tournament at an events that no one can remember anymore.

Their decks are surprisingly different considering that they are both Stompy decks. Evans has bigger creatures in the form of Blastoderm and Saproling Burst. In addition he has more mana acceleration because he runs Llanowar Elves. Fuller has more weenies, including the 1/3 forestwalking Vine Dryad, which could be important in this matchup. Fuller also has two Lumbering Satyrs in his sideboard that could come into play. 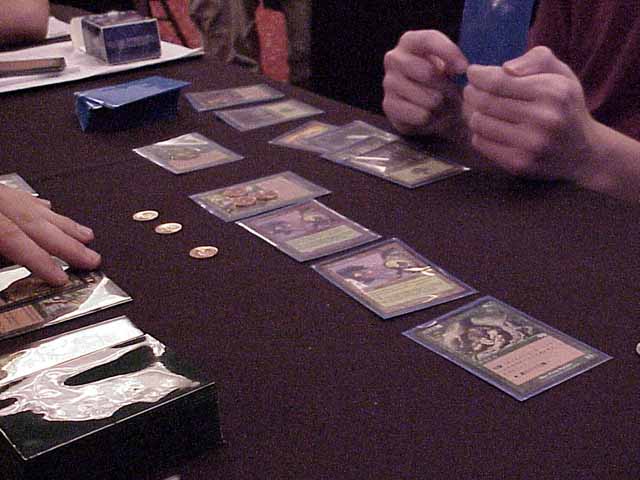 Evans won the die roll and decided to play a Gaea's Cradle on his first turn (thus preventing Fuller from playing one this game). Fuller played turn 1 Wild Dogs, turn 2 River Boa, and turn 3 Tangle Wire. Evans had played a turn 2 River Boa of his own, but Fuller's Tangle Wire prevented him from doing anything but playing Llanawar Elves. Fuller dropped an Albino Troll. On his next turn Fuller, Rancored the Troll and attacked. Evans did have a surprise Giant Growth that was able to take out the Troll, but Fuller still had all the momentum. Evans next played a Tangle Wire of his own which may not have been the best play since he was trailing on life and board position. Evans was never able to cast the Blastoderm or Saproling Burst that were in his hand. It turned out that Fuller had Wild Might in his hand and that would have won him the race before Evans could have done anything about it anyway. 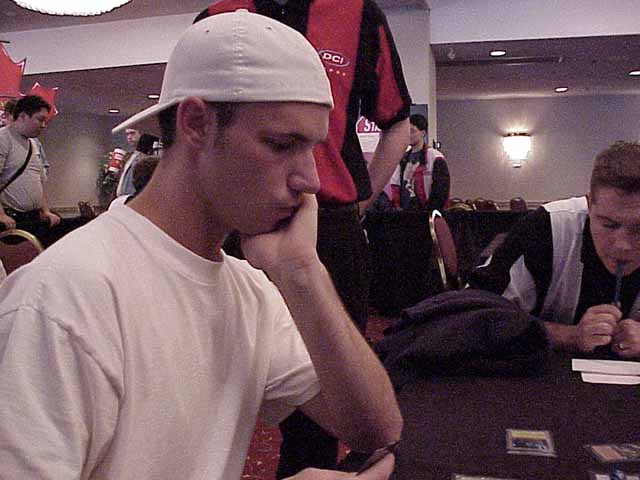 Things looked good for Fuller in game 2 when he played an early Vine Dryad. However, he did not have the Rancor he wanted in order to turn the forestwalker into a fast clock. Fuller left his River Boa back to play defense, but Evans kept attacking through, around, and over it. Evans played turn 5 Blastoderm, then Fuller traded two Elvish Lyrists for a Pouncing Jaguar. Evans then played a Saproling Burst and created three 3/3 Saprolings. This allowed Evans to attack with Blastoderm, Albino Troll, 2 Treetop Villages, and three 3/3 tokens. What an attack! Fuller lined up his blocks so that he would take 12 damage, down to one, but Evans had the Giant Growth he needed to finish Fuller off. Evans may not have any forestwalkers, but his creatures are just bigger than Fuller's. Saproling Burst looked amazing that game and Evans seemed more confident as he shuffled up for game three. 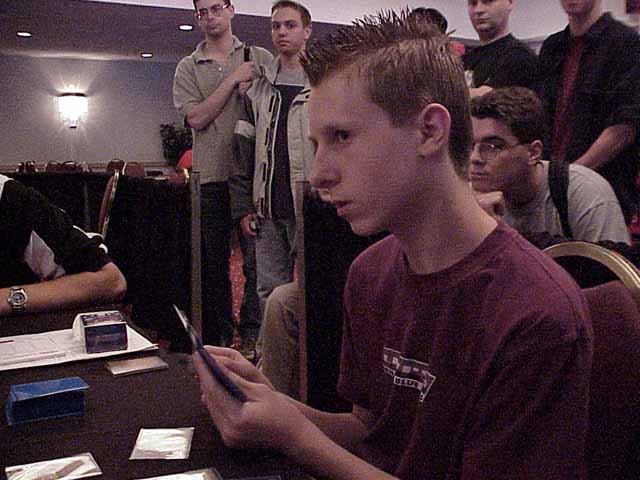 Game 3 was pure race. Evans had two Rancors early and drew into a third before the game ended. However, Fuller had a lot more creatures in his draw. Fuller was able to block Evans's creatures, taking trample damage, but sending those Rancors back to Evans's hand. That plan doesn't often work out, but Evans had so few creatures in his draw that Fuller had a shot. The key turn came when Evans had Fuller down to 8, and had a doubly Rancored Llanowar Elves and a Treetop Village in play. Fuller had 5 power worth of creatures and Evans was at 6. Evans was all tapped out and had no blockers, so if Fuller had a Giant Growth, the game would be his. Fuller didn't have a Giant Growth, but he did draw Albino Troll off the top of his deck that turn. The Troll could suck up enough trample damage that Evans could not win on him next turn even though he had a third Rancor in his hand. Fuller also left back a Jaguar just to be sure. To be fair to Fuller, just about any spell would have been enough that turn (since any creature could be used as a chump block and any enhancer would win the game immediately). However, Fuller did need to draw a spell that turn or Evans would have taken a 2-1 lead in the match.

Fuller had no land in his initial draw and obviously chose to mulligan. His new hand had one land, and Fuller never drew another one. Fuller fought gamely for a couple of turns, trading Wild Dogs and Pouncing Jaguar for two of Evans's creatures, but two Albino Trolls and then a Tangle Wire cleaned things up quickly for Evans. Fuller tried to intimidate Evans after game 4, talking about the one game they were about to play with "a thousand USD" on the line. 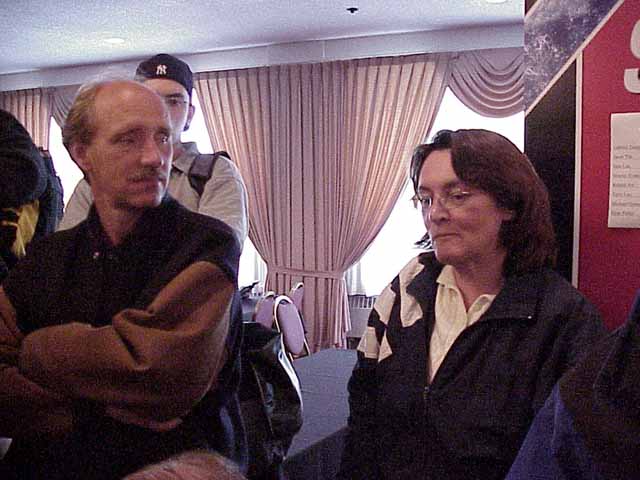 Game five was a fairly typical green-on-green match: fast and bloody. Fuller played Wild Dogs and Vine Dryad on his first turn. Evans played an Elvish Lyrist and then traded it for the Dogs. On his second turn, Fuller played Gaea's Cradle and a pair of Pouncing Jaguars. Evans played a second Lyrist and used Giant Growth on it to kill one Jaguar. Evans then Rancored up that Lyrist on his third turn and served for three damage. It looked like an even 3 for 3 race at that point, but Fuller played Rancor on his Vine Dryad and swung the race in his favor. When Fuller also played an Albino Troll on just his fourth turn, he could smell the title. Evans activated his Treetop Village and sent for 6. Fuller declined to trade his Troll for either of those creatures and just took it, dropping to 10. Evans's big plan was to play Saproling Burst on his fifth turn, which would allow him to block pretty well and then attack for the win. However, Fuller had Wild Might in his hand and Evans never got a fifth turn. Fuller attacked and used Wild Might to clinch the game and the match.