I have this image of Kai in my mind... in it, he is sitting in a throne on one side of the Feature Match table, crown slightly askew, scepter in hand... he raises his fist and shouts to his entourage, "Bring me a challenger!" 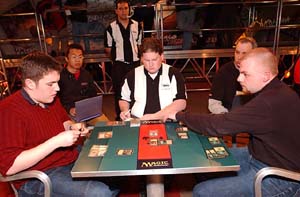 Kai is certainly no tyrant of a man, but his stranglehold on the world of pro Magic is nothing short of oppressive. Just earlier today he reminded Jon Finkel of the current pecking order, and with the troublesome Bram Snepvangers already out of the way, it looks like Kai will drink from the victory cup again today.

The man who has to stop him is Nicolai Herzog. Herzog, a Pro Tour fixture, wants to follow in the footsteps of his countryman Eivind Nitter, and win a draft PT with Kai in the Top 8. Nitter did it in Nice with Beast Attack, and now Herzog will try to do it with Elves.

Game 1 started out with a bunch of fact 2/3's—Herzog had back-to-back s, and Kai played a .

Kai added his Cleric Combo of and to the table, and Herzog had a third Elf, this one Symbiotic. Kai hit for four, and then Herzog attacked with his team, getting four through, but trading his for the Archon. Herzog got two Insects in the exchange, but Kai got a two-point Drain Life and a Zombie out of the deal. The life totals stood at 14-12, with Kai in the lead.

Herzog took another hit from Kai's team, and dropped a to try stabilizing his life total. But Kai had a morph and a which threatened to make things sticky when combined with the .

"Man, that Reanimator is good," lamented the Norwegian.
"This is true," replied Kai, continuing with the face-smashing.

Herzog's Elves had to play defense for a turn, and he had to use his just to get a 1-for-2 with the Kai revealed.

Herzog still had a and a 2/3 when he dropped his (or Elf Cannon, as the case may be). Kai kept hitting with the Primoc, and would occasionally activate the , but was keeping Herzog at around 3-4 life, and neither player was drawing much business.

Kai eventually added a to his side of the board, and Herzog was lucky to draw a , capable of powering the Cannon and fetching a buddy. Herzog blocked the Husk with the Herald and sacrificed it to shoot down the Primoc. He fetched and the game looked to be turning around.

Kai, surveying the board, decided his best option was to play for a draw. He used the Shepherd to bring them both to three, and hoped to draw one of his four s or s.

Instead he drew and won the game outright, much to the shock of Herzog and the crowd.

Budde's draws were weak at the end of the game, partially because he had to play three cycling lands early in the game, meaning he was more prone to draw regular land late. But he got the one he needed, right when he needed it.

Herzog sided out his black for the remaining games, going with a sleek, aggressive mono-green Elf deck. His plan was to come out quicker than Kai and flood him with creatures. 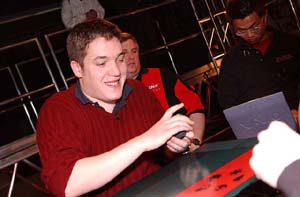 Budde came out rocking in Game 2, deploying , , and two face-down guys in the first four turns.

Herzog tried to slow things down by playing higher-toughness creatures, such as s and , but in the end, his draw—eventually tallying 9 forests and 6 spells—could not match up with Kai's.

Herzog swallowed hard as he kept the two-forest hand for what could be the final game of this event. He drew lands three and four (both forests) right on time, and put out , , and in succession. 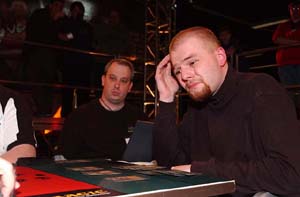 But once again, Kai's board was better: , , , and . came down on the next turn, and it looked like the Reanimator would lord over this game. Herzog seemed deflated. Green cannot race when it cannot afford to trade.

Herzog was in no position to attack, and eventually the game ended when Kai played out about seven creatures and then cast .

It wasn't pretty, but Kai Budde has now won his 7th... SEVENTH... Pro Tour. Bob Maher may have to wait another season for his second Player of the Year Award.