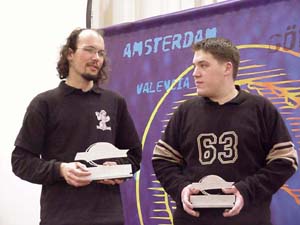 The game started of fast enough with Kai getting Fledging Imp, Crypt Creeper and Cephalid Scout earlier on and using a Repel and Aether Burst to keep Labarre's blockers out of the way.

Nicolas got back at him with a two-creature Burst of his own gaining so precious breathing room to swing with his creatures and drop a Treetop Sentinel. In came the Imp and Creeper.

Kai: "My deck is not very impressive in this game."
Nicolas: "I kind of like it."

When Labarre sent his creatures into the Red Zone, Kai wondered out loud if Labarre had a Refresh in his hand. Still he decided to take the damage but he reacted to an Aven Smokeweaver.

He was surely impressed when he used Last Rites for two on Labarre and saw two Syncopates, a Though Eater and a Rites of Denial. He took a Syncopate and the Eater amongst comments about the power of Labarre's deck.

Another flyer, this time an Aven Fisher, gave Labarre a big Flying Force and after using his Cephalid Scout to the fullest and taking a six point swing Kai was forced to scoop up his cards to the crowd rejoice.

While they shuffled, the crowd decided they should stand on the tables to get a better view and Kai told a few inside stories about the last Pro Tour Top 8. They discussed how lucky or unlucky they were in the first game and the draft.

Kai: "This is a really bad habit. In New Orleans I also lost the first game."
Nicolas: "I can imagine the pressure."

They both kept their hands and Kai tried to play a third turn Cephalid Looter but Labarre had the Syncopate ready for it. The French played two Krosan Avengers but then Kai got really mean and played a Shadowmage Infiltrator (aka Finkel).

Kai: "When I saw it I thought I should keep this hand."

Unfazed, Labarre raced as best as he could bouncing and getting a Seton's Desire on his remaining Avenger. Kai simply replayed the Invitational card and bounced the big monster.

On the next turn he used a Scrivener to recover the Aether Burst.

Nicolas: "Do I smell incoming trouble?"
Kai: "Yes you do."

Kai's deck then kicked into high gear with Scrivener blocking, getting recovered with a Gravedigger and the Aether Burst getting used another two times. All this, was done at lightning speed with both players drawing and playing their spells in a blink of an eye.

Nicolas: "You might have to discard at some time."
Kai: "Eventually."

But he never got to that point. Labarre was having a hard time keeping a creature on the table and without blockers your life totals does have a tendency to vanish at an alarming rate. It was a very short and very brutal game with Kai's deck really stretching its muscles and showing what it could do.

The final game of the tournament with the title on the line and both players seemed relaxed, as if they were playing for fun at their local store. Kai pondered mulliganing his land-heavy draw but shrugged it of and decided to keep it.

He came out with a second turn Crypt Creeper and Nicolas used his Call of the Herd. The Creeper swung into the token and took the spell from the graveyard on his way out. Labarre dropped a Springing Tiger and Budde recovered his Creeper with Gravedigger.

He double blocked the Tiger with Gravedigger and Dusk Imp. Down to fourteen he needed a big blocker and he got it in the shape of an Aven Windreader. From then on Kai dubbed any smaller creature "too small" even when Labarre considered sending them into the Red Zone.

A Morgue Theft, with immediate Flashback got Kai his precious creatures back. On the Elephant token next swing the Windreader blocked it and he got into a Syncopate fight over a Sylvan Might that Labarre won.

The German was having trouble keeping up with flood of the game as Nicolas pushed on and on countering the returned Windreader and dropping Budde down to four. The crowd leaned forward waiting to erupt and shrugging his shoulders Labarre sent his creatures in for what seemed like the final time. Unless Kai could do something quick he would die

Kai drew his final card after trading creatures to leave only the Sentinel on the table and shrugged as he drew his last card. Nicolas had done. The invincible machine got beaten by the French player. Nicolas could finally breath again and color returned to his face as his friends rushed towards him to congratulate him.

Noah: "You can't have a ceremony now. Kai lost."

Before the match, Labarre told us he has been to many different finals at different levels but the only thing he ever won was a pre-release. Well he broke his finals jinx and ended Kai's impressive title strike. And he did it all in his homeland.