Finals: No Controlling this Zoo

Japanese knew going into this match that Willy Edel's Zoo deck was going to be tough to handle. Shota Yasooka has played like a champ thus far in the tournament, but few decks have tested his control deck in such an aggressive fashion. 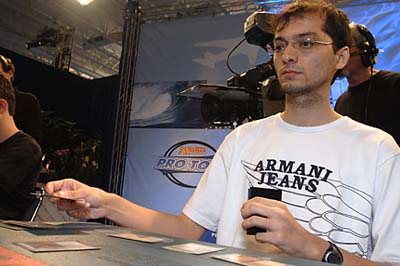 Despite the sour look, Edel was happy to roll over Yasooka in Game 1.

Game 1 was utter annihilation on the part of the Brazilian. He started things off with a Selesnya Guildmage, and then followed that with two Birds of Paradise and a bounce land. Watchwolf hit the table a turn later, and then Grand Arbiter Augustin IV ate a Lightning Helix right to his officious face. Rumbling Slum followed that and Yasooka was dead practically before anyone noticed.

Game 2 was a much different affair. Yasooka was on the play this time, giving him a chance to stay ahead of the curve by using Remands to stave off the beats. Edel had to take a mulligan as well, keeping a hand of lands and spells, but not a whole lot of gas.

While Yasooka was resolving Court Hussar, it gave Edel a chance to slip Sunforger onto the table. He attached the equipment to his Bird a turn later and started to attack, turning the bird into a formidable flying clock and a reusable tutor as well. Yasooka killed the Bird with Mortify a turn later, using a Remand on Edel's Bathe in Light. Edel just shrugged and cast another Birds.

The next play was perhaps the difference in this game. Instead of Yasooka using Faith's Fetters on Edel's Sunforger, he used it on his Birds of Paradise, thus leaving the Forger around to generate tutor-rific card advantage every single turn. 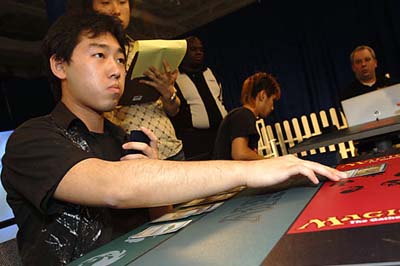 Yasooka was on the losing end of serious burn.

Selesnya Guildmage from Edel met a Remand, but that left the door open for Loxodon Hierarch to resolve. That was fine by Yasooka, since it just gave him a juicy target on the next turn for his Angel of Despair. Edel had a Demonfire in hand at this point and waited perhaps too long to use it on the Angel - he had a chance to make sure it left play when Yasooka was tapped out, but used it instead a turn later when he was sitting at a scant 5 life.

Another Angel kept the pressure on the Brazilian, killing a karoo, but Edel used a forged Lightning Helix targeting Yasooka's head to stay alive, absorbing the Angel attack and going to 3. He then attacked Yasooka down to 3, and conversed with teammate Paulo Vitor for a moment about what they should tutor for.

Char was quickly deemed the correct choice, and Yasooka was forced to concede, the Trial/Error in his hand that would have stopped a Lightning Helix sadly impotent against the fiery redness of Char.

Willy Edel took the match 2-0 and gave Raaala Pumba a one-match advantage in the finals.