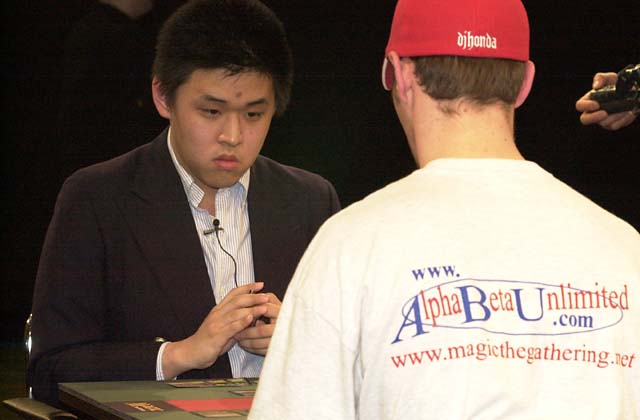 Noah Boeken, from the Netherlands, was matched up against Itaru Ishida, one of the most accomplished Japanese Magic players. While newer fans might remember Noah Boeken's recent string of Top 8 finishes in European Grand Prix, Itaru Ishida has had a much longer career and also boasts some impressive finishes. In Pro Tour - Los Angeles 1998, Itaru Ishida came in 13th place, which was the best Japanese finish in a Pro Tour until Satoshi Nakamura bested it in Pro Tour - Los Angeles 2001. In addition to that, Itaru placed Top 32 in Pro Tour - New York 1998, as well as Top 8 in three Grand Prix. Would this seasoned Pro Tour veteran be able to fend off one of Europe's rising stars?

Noah was using a Black/Blue/White deck with a good assortment of creatures, coupled with countermagic (Exclude and Prohibit), discard (Bog Down and Hypnotic Cloud), and removal (2 Agonizing Demises). Itaru was playing a similar style of deck using Blue, White and Green cards, although his deck's strength was the creatures, with Angel of Mercy, Razorfoot Griffin, Rainbow Crow, and Charging Troll among others. In addition, Itaru Ishida had some countermagic at his disposal and an Armadillo Cloak to make one of his creatures even more powerful.

Noah Boeken won the die roll and chose to play first. He had a good assortment of land and began applying pressure with a third turn Shoreline Raider, followed up by a fourth turn Vodalian Zombie, which was countered by Ishida's Exclude, and a fifth turn Slinking Serpent, a nearly unstoppable threat against Itaru due to its forestwalk. Despite taking some early damage, Itaru made a swift recovery, playing an Angel of Mercy and following that up with an Armadillo Cloak to not only deal twelve points of damage to Noah but to gain a significant amount of life in the process.

Unfortunately for Itaru, Noah quickly found an Aura Blast with which to destroy the Cloak and shortly thereafter but the brakes on the Angel of Mercy with an Agonizing Demise. While this left Itaru Ishida with only one threat, a Tolarian Emissary, Itaru was had a significant life advantage over Noah, with 18 life to Boeken's 7. Would Itaru be able to race Noah's Slinking Serpent? For a moment, it seemed that a Zanan Djinn would decide the game for Itaru, but it was quickly killed with Noah's Agonizing Demise. In the end, the Tolarian Emissary failed to keep up with Noah's ragtag collection of attackers like Phyrexian Reaper, Metathran Zombie, and Slinking Serpent. 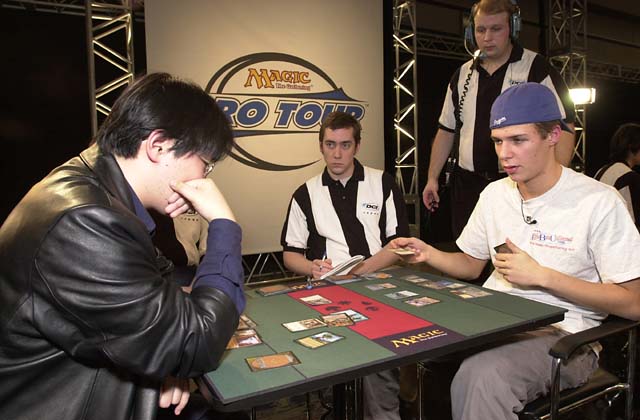 Itaru Ishida decided to play first and got off to a fast start with a second turn Utopia Tree and a third turn Razorfoot Griffin. Noah was stuck with a pair of Zombies, one Metathran Zombie and one Vodalian Zombie. For some time, the Razorfoot and Vodalian traded blows, chipping away at each player's life totals. Noah attempted to add a Phyrexian Reaper to the mix, but this was countered by Itaru's Exclude, and Itaru Ishida came back with a Rainbow Crow, doubling the pain that he would be inflicting to Boeken. Itaru then attempted to Armadillo Cloak one of his fliers but Noah once again had the Aura Blast in hand, so it didn't stay on the table for long.

Itaru Ishida had a Samite Elder that was active and he had the option of giving all of his creatures protection from blue and white, thus knocking the Armadillo Cloak off, fizzling the Aura Blast and preventing Noah from drawing his card. However Itaru realized that he could now turn his Rainbow Crow black and give all of his creatures protection from black, preventing an Agonizing Demise from stopping his flying assault, so he wisely chose to leave his Samite Elder untapped. Noah Boeken slowed down the assault with a Kangee, Aerie Keeper, preventing Ishida's Rainbow Crow from attacking and also Prohibited a Charging Troll. In the end, however, Noah succumbed to Itaru's flying beats.

Before the game began, Noah was very eager to see how his teammates were doing. Chris Benafel had just won his match and Ryan Fuller was on game two of his, having won the first. Noah clearly didn't want to let down his team and he became a bit nervous after he was forced to mulligan down to six cards. He kept his next hand however and cast a Bog Down on the third turn, knocking an Island and a Rampant Elephant out of Itaru Ishida's hand. Itaru had nothing to play until the fourth turn, when he attempted to cast a Razorfoot Griffin, which was countered by Noah Boeken's Exclude. Noah then came back with an Aura Griffin. Unfortunately for him, Itaru had even bigger monsters to cast and an Angel of Mercy was soon flying across at Noah. 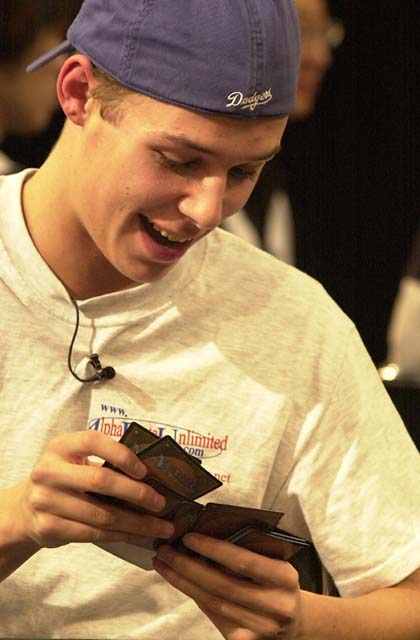 Noah had an answer for the Angel of Mercy, a Shackles, but it was stopped by a Repulse from Itaru Ishida. Pretty soon the Angel was back in play on Itaru's side, providing him with even more life gain. Noah Boeken was able to mount some defense with a Stormscape Apprentice and an Agonizing Demise for the Angel of Mercy and a Razorfoot Griffin which Ishida followed that up with. The Stormscape Apprentice was eventually bounced and countered and Itaru Ishida simply had too many threats, with a Charging Troll and a Zanam Djinn that Noah had run out of answers for. Itaru Ishida won with a final attack from the Zanam Djinn.