Over three hundred players started the European Championships this year, but only two remain - Raphaël Levy of France and Noah Boeken of the Netherlands. By now the reader will have seen the two decks, a Replenish deck for Raphaël and a Stompy deck for Noah.

It's difficult to say who this match favors, a lot depends o the draw of the Replenish deck, whether he is able to get a Parallax Wave into play to control the green decks speed.

Raphaël doesn't seem too phased and begins sideboarding. His Counterspells are too slow in this match, and his Seal of Cleansing doesn't really have that many targets - although Tangle Wire is of course a big threat - he elects to take these out and replace them with Wrath of God and Seal of Removal. Noah removes some of his slower, smaller creatures, replacing Vine Dryads, and one each of Pouncing Jaguar, River Boa, and Albino Troll with Rushwood Legates, and Thran Foundries.

Although Noah does a good amount of quick damage in game two, it is Raphaël who is in control. He controls Noah's forests with a Parallax Wave, and brings out an Opalescence to make it into a pretty big blocker. He also has a Seal of each type in play.

The Seals make into the graveyard, dealing with an Uktabi Orangutan and a Tangle Wire. Raphaël is in complete command with a Wrath of God and then a Replenish. He attacks a few times and it's o to game three. 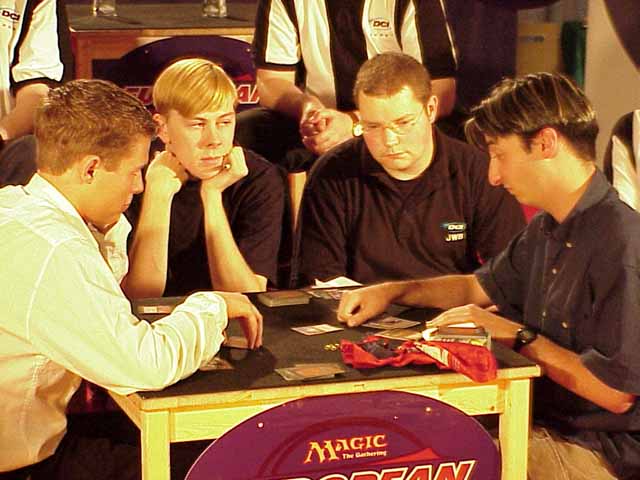 Noah's draw in game three is weak, he just doesn't have enough creatures. A Pouncing Jaguar and an Elvish Lyrist aren't much pressure by themselves, and his Thran Foundry turns out to be no good as Raphaël can simply cast his enchantments in hand. He plays two Seals of Removal followed by a Parallax Wave, and while Noah is drawing only land, Levy is doing much better, he draws two more Parallax Waves and an Opalescence. There's no way a green deck can deal with three 4/4s without and creatures in play, so Noah quickly scoops.

It's Raphaël's turn to keep a poor draw in game four, he probably in hindsight should have mulliganed his two island, no white sources draw. But in any case Noah is giving him no chance to recuperate, with a turn one Wild Dogs, and a busty turn two of Gaea's Cradle, Rushwood Legate (for free), River Boa, and a Thran Foundry. Raphaël concedes on his turn four as Noah has enough damage in play to kill him next turn.

So the 2000 European Championships comes down to a fifth and final game. 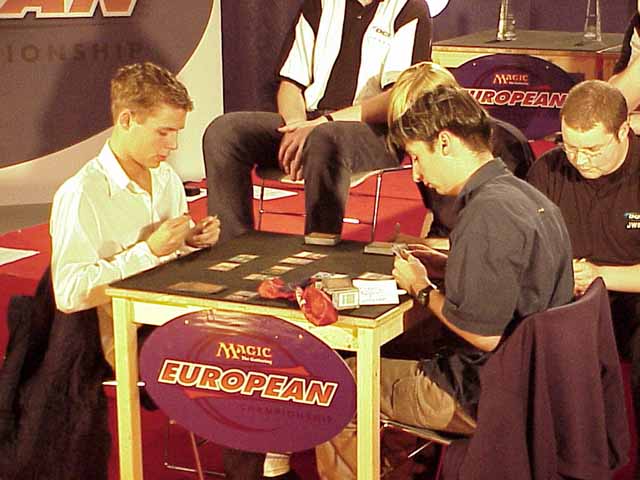 It seems at first that Noah's draw is not great, he only has two lands - although one of them is a Gaea's Cradle, and on turn three has a Wild Dogs and a Pouncing Jaguar as his creatures. His turn four is amazing though. Raphaël has been forced to put an Island in play, so even though Raphaël Seal of Removals the Pouncing Jaguar, out comes a free Rushwood Legate, the Pouncing Jaguar and a Tangle Wire. Raphaël thinks for a long time at this point, with an Enlightened Tutor in hand, and eventually decides to do nothing this turn, merely tapping his lands and hoping to do something next turn. There is no next turn though, as Noah shows off a Wild Might, and a Giant Growth to do exactly enough damage to win the game.

Noah Boeken wins 3-2 and is the new European Champion. Congratulations to him.