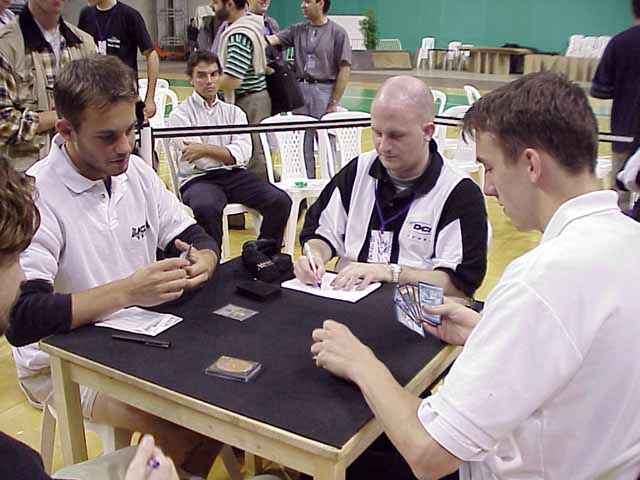 If ever there was a great atmosphere for a match it was right here. The tensa-barriers were released so the crowd could move in and the two brothers faced off in deadly silence. Well, in fact they faced off with a barrage of light hearted abuse and I guess we can only be thankful that most of the crowd could not understand French too well.

The younger brother, Olivier, was the favourite going into the final with a load of red removal and Alexi, but Antoine had a solid deck too as they had both love drafted next to each other. The elder brother (and shorter) was playing black/white.

After considering both mulliganning down to 0 and starting game one from there (they didn't) Antoine rolled a 19 to see who starts. Olivier then pronounced that he would roll a 17 and subsequently did......these French are dodgy punters.

Sure enough Antoine then misses his fourth land drop and casts a Diving Griffin. The creatures thqt then hit the table are Oraxid, Defender-en-Vec and then Alexi. The Oraxid gets Viciously Hungered and the life scores are still incredibly high for two such aggressive decks at this stage.

Now......this is a Grand Prix final, but they are joking around a fair bit, so you can kind of excuse Ruel the younger for lunging a Griffin when the Defender en-Vec was in play. For some reason he also casts a main phase Submerge, but that might have been to enforce the screw as his brother had still not drawn a fifth land. Despite these mistakes Alexi proves to be too much for Antoine and he sweeps on 6 life.

Antoine starts to make some whimpering noises about letting his brother draft such an obscenity. Clicking somewhere in his mind is the idea that he might be able to win by getting Olivier two game losses somehow, but he seems resigned to his fate.

This time the land flowed thick and fast for both of them, but all of Antoine's early creatures were dispatched with removal spells and as a turn two Darting Merflok started serving for 1 a turn. The removal soon dries up though and he is left with A Fen Stalker and a Jhoval Rider. Then Olivier makes a Flowstone Overseer which threatens to swing the game back, but a Sever Soul (the second swamp was top decked) deals with him whilst the Fen Stalker keeps serving for 3.

Still knowing he is the underdog Antoine jumps up again and claims that Olivier did not say he elected to play first, but we quiet him down and he grumbles his way back to attention muttering the french equivalent of "Oh bugger".

"You know the real difference between you and me Antoine?" says Olivier.
"No."
"I am going to win - hehehe" 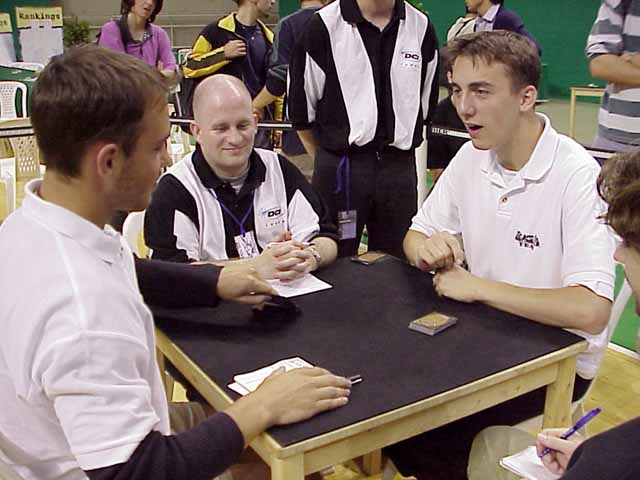 This game was over in a flash. By the end all Olivier had drawn was a Fault Riders, a Wandering Eye and a Lunge.

This is how it went:

Olivier: Island
Antoine: Swamp
O: Island
A: Plains
O: Mountain FAULT RIDERS
A: Swamp BELBES PERCHER
O: Mountain WANDERING EYE (All Olivier has at this stage is land and Lunge, whilst his brother has a whole ream of spells in his hand including a Sever Soul). Attack for 4 with the Riders.
A: Plains PHYREXIAN PROWLER Attacks with Percher for 2
O: Draws another land! - Attacks for 4 more
A: For some reason Antoine attacks before casting an Enslaved Horror.

The life scores at this stage are 12 (Antoine) and 15 (Olivier).
O:Draws another land! This time he cannot afford to attack with the Fault Riders.
A: He has so many options, knowing that all he is facing is a Lunge and some land, so he just makes some creatures and attacks.

Olivier, drawing yet another land, concedes in disgust at his draws amidst the apologies of his brother and they smile and shake hands. "C'est la vie."

Note: these guys can actually play magic I am told.....It's just that after 2 whole days of ceaseless play they were happy for each other and were playing extremely uncompetatively.