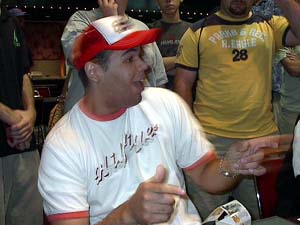 Pro Tour winner and TOGIT superstar Osyp Lebedowicz has already shown he's a master of the Block Constructed format, and coming into this weekend noted Magic pundit Josh Ravitz gave him fifty-fifty odds of making the top 8. Michael Kuhman probably could have gotten 1000-1 coming into the weekend that he would not make the finals, and in the end it would have been a great bet. His Big Red deck has allowed him to survive play mistake after play mistake on his way to a huge payout as both top amateur and at least second place.

"Look, do me a favor, okay?" asked Osyp, as the players were settling into the Feature Match area. " Mess up against me like you did last time, so that this match is easy. I need the extra Pro Tour point for the end of the year payout."

"I have been so bad this tournament," Kuhman admitted. " Like, I've messed up against probably every opponent today, but I'm still in the finals. That just proves my deck is amazing."

Osyp got out to his usual fast start, forcing a chump block on turn 2 from a Slith Firewalker as he swung with a 7/2 Frogmite on the third turn. Aether Vial at the end of Kuhman's next turn put Atog into play with Kuhman tapped out, and the Atog plus a bunch of sacrificed artifacts and life loss from Disciple of the Vault dropped Kuhman to -1 life. We hear turn 4 kills are pretty good in most Block Constructed environments, and this one is no different.

In Game 2, a turn 1 Vial from Osyp died to Shatter, while a second turn Ravager met its end from an Electrostatic Bolt and Kuhman complicated matters further by casting a fourth turn Arc-Slogger off of a Seething Song. Shrapnel Blast made certain the electric beast didn't stick around to do anything, as the game devolved into a battle of removal from both sides. Luckily for Osyp, Kuhman stalled on three land, turning what looked like a hot start into a real problem. Granulate cleared away a Frogmite and an Arcbound Worker, but left Osyp with all of his lands and an Atog. A second Atog plus a Cranial Plating gave the TOGIT member a two-turn clock, and Kuhman simply conceded he couldn't stabilize the board, revealing his only card to be a Pulse of the Forge. 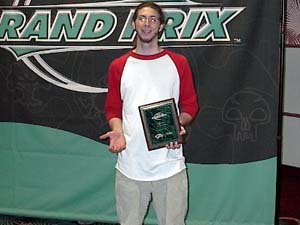 "What was your opening hand?" asked Osyp. "One land, double Electrostatic Bolt and Shatter. I had to keep it because it was too good. I even drew the lands I needed for the first couple of turns, but it didn't matter."

"Wow, I don't think I'd risk it," admitted Lebedowicz. "But good job, my man. You made more money than me this weekend, anyway, so good for you."