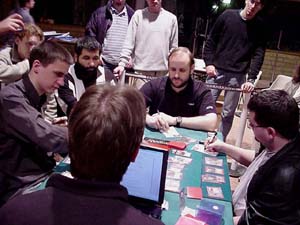 Only one match left to decide the champion of Grand Prix-Naples. On one side is an in form Dutch player – Jelger Wiegersma, with a Top 8 in Grand Prix-Heidelberg already in this format. On the other is the two-time French Champion Pierre Malherbaud, who has already completed the difficult task of knocking Kai Budde out of a Top 8.

"You like the matchup?" Wiegersma asked.
"Yep," Malherbaud replied.
"I thought you would," Wiegersma said.

Malherbaud has a green-black deck with lots of fast creatures, three Cabal Torturers and Squirrel Nest. Wiegersma has a blue-green deck splashing black for Afflict and two Waste Away. Unfortunately a lot of his creatures have only one toughness.

Malherbaud won the coin flip and opted to go first. A Filthy Cur jumped out of his deck and a Peek from Wiegersma revealed two Frightcrawler, Crashing Centaur and Dirty Wererat.

Turn three and Malherbaud still found a Torturer. Wiegersma summoned a Skywing Aven to give the Torturer something to do.

Looter died in pain...
Farmhand bravely threw itself in the way of a Wererat...
Skywing Aven kept running away...

"I think my best plan is to run you out of sleeves," Wiegersma said as Malherbaud replaced a couple that broke during the Torturer's exertions.

Dreamwinder got nobbled by the Torturer after blocking the Wererat...

Wiegersma did manage to attack with a Leaf Dancer and the Aven and then some explanation was provided for the senseless slaughter as Springing Tiger hit the table all angry over the number of dead in the Dutchman's graveyard.

There were a few random Squirrels and other menagerie to get through before the Tiger could even think about getting close to Malherbaud and then the Frenchman played a Squirrel Nest to give him a never-ending supply.

A Disciple came out on Wiegersma's side and Malherbaud decided it was time to unleash the menagerie. Wiegersma's Disciple got eaten by a Mongrel in defense and the Tiger smashed the Filthy Cur straight back into Malherbaud's life total.

Wiegersma survived on one life and Malherbaud was at nine. This was unfortunately two higher than the damage Wiegersma could do with a Phantom Winged Tiger and Leaf Dancer and the Squirrels surged forward again.

Wiegersma went first and they both dropped forms of mana acceleration – a Millikin from Wiegersma and a Diligent Farmhand from Malherbaud. Wiegersma used the Millikin to accelerate up to a Dreamwinder while Malherbaud used the Farmhand to hunt for a second swamp for his Torturer, backing it up with a Chatter of the Squirrel.

This time Wiegersma had an Afflict but Malherbaud also had a second Torturer and a Wild Mongrel to follow at its heels.

Millikin was first on the rack and a Farmhand went hunting for land before it was its turn.

Malherbaud summoned a Crashing Centaur and now Wiegersma had only one nervous looking Dreamwinder to hold off that, a Wild Mongrel and two chattering Squirrels. 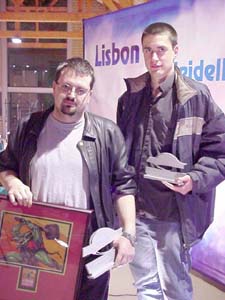 Wiegersma wasn't afraid to use massive overkill as Waste Away sent the annoying Torturer to the graveyard and also gave Wiegersma Threshold to improve a Seton's Scout that galloped out of his hand.

Malherbaud cast Tainted Pact and took the first card it turned over – a Famished Ghoul.

Mongrel and Dreamwinder tussled in the Red Zone for mutually assured destruction and then a second Waste Away took down the Centaur with Malherbaud just one card away from reaching threshold.

The Frenchman sent in the Ghoul and flashed back an Acorn Harvest to give himself a few more Squirrels that decided to stay at home in the face of Wiegersma's Scout.

Wiegersma used Obsessive Search to look for an answer and Malherbaud cast Elephant Ambush in response just in case. A Ghostly Wings made the Seton's Scout a much tougher blocker but it was one and Malherbaud's Squirrels were many. A full frontal assault lost the Elephant token and dropped the Dutchman down to three.

A Leaf Dancer gave Wiegersma another blocker but Malherbaud had five creatures, six when he flashed back the Ambush. Too many when you're only on 3 life.