The setting for the final was amazing, as the tables were located from inside the hall to outside on the terrace overlooking the river Rhone. Pierre Malherbaud looked particularly dashing smoking a cigarette and wearing a pair of Aviator sunglasses as he perused his opponent's decklist. There was only a very light breeze so no danger of players cards blowing away, and still at least two hours of daylight left. It probably wasn't bright enough to need the sunglasses. Spectators could watch the game from the terrace, or from a nearby staircase leading up to the roof of the Palais des Papes. 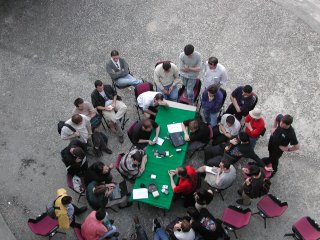 Laurent's opening hand had Islands as it's only mana source, but he kept it nonetheless and hoped to draw his other two colors. Pierre also had to think for a while but he kept it. Pagorek's hand seemed like a risky thing to keep against a fast deck like Fires as he had nothing in his hand he could cast, but Malherbaud wasn't doing much either, as he seemed content with his Birds of Paradise and just used his Rishadan Port every turn.

Finally as Pagorek played his fourth Island in a row, Pierre was tempted into playing a Shivan Wurm. Laurent drew an Accumulated Knowledge and used it to find a Salt Marsh, but this was now rather too late. The Shivan Wurm put him on thirteen, and Pierre played a Saproling Burst. Pagorek had nothing to deal with this with just four Islands and a Salt Marsh, and had to concede on his seventh turn.

Laurent brought in his Hibernations, Terminates, and Pyroclasm, while Pierre once again sideboarded Kavu Chameleon, Blood Oath, Obliterate, and Scorching Lava. This time even Laurent couldn't keep his opening hand as his only land was an Island. Once again he only had Islands in his six card hand, but at least he had spells he could cast this time, Counterspell, Accumulated Knowledge, and Tsabo's Web.

The Knowledge on his second turn gave him a Terminate, which the observers behind him began to snicker at, as he didn't have either color of mana necessary to play it. He still had two Counterspells though, so he wasn't out of it yet as all Pierre had played was a Fires of Yavimaya, and then a fourth turn Llanowar Elves.

Laurent drew a Mountain and played a Tsabo's Web leaving two Islands open, but chose not to Counterspell the end of turn Rith's Charm for fear of something better in Pierre's turn. He was right to do so as Malherbaud attempted a Saproling Burst.

Even so it was difficult for him to deal with the Saproling tokens, he needed to draw one of his sideboard cards either Hibernation or Pyroclasm. Pierre attempted another Burst and it was also Countered, but the Saproling tokens had now brought Laurent to thirteen.

Pierre is the French National Champion, repeating his feat of 1998.