And finally it all comes down to one match. Out of just under 270 players the field has been whittled down to two highly experienced players. Both Pierre Malherbaud and Nicolai Herzog have been here before way back in 1999. That year Herzog became the eventual champion. This year the Norwegian is looking to repeat the feat while Malherbaud is looking to win the title for the first time. 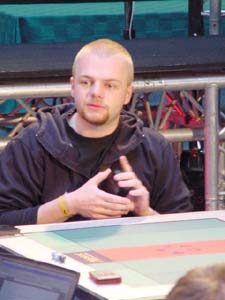 "You've already won it once, you can let me win it this time." – Malherbaud.

Malherbaud is running a Reanimator deck while Herzog is running blue-green. Both decks look to make very powerful monsters very quickly either through madness or getting them out of the graveyard cheaply. Malherbaud's disruption comes in the form of attacking the hand with discard while Herzog will be looking to either counter the reanimation spells or Unsummon the creatures if the spells get through. Malherbaud is confident about the matchup despite Herzog being the cause of his only loss in the tournament so far.

Herzog madnessed out a Rootwalla with Careful Study and Malherbaud took the opportunity to Entomb Akroma end of turn. Herzog summoned a Wild Mongrel for support on turn two. Malherbaud was building up to something nasty though, a Doomed Necromancer appeared on the table.

Herzog Studied for an answer, netting another free Rootwalla and added an Aquamoeba to put pressure on the Frenchman.

Sure enough Necromancer became Akroma, Angel of many abilities and she rushed in to smash Herzog for 6. The Norwegian hadn't found an Unsummon so his only strategy was to try and swamp the first-striking, non-tap to attack monstrosity. A Mongrel got slaughtered by the blue-haired killing machine, but its death allowed the others through for 7 damage.

Malherbaud bashed back for another 6 and tried to bring out a second Necromancer. Logic prevented that. Herzog held back the Aquamoeba in his turn, fearing a trick, and sent in the Walla's. Another creature got smashed to the graveyard but now Malherbaud was down to 5 life. The Angel flew over again, knocking Herzog to two.

Malherbaud was crying out for support. A second Circular Logic denied him the Zombify that would have dug out another blocker. Akroma bravely swatted another nuisance but the other two creatures swarmed past and did the Frenchman in.

Herzog brought in the Composts, Counterspell and Upheaval while Malherbaud, whose sideboard consisted mainly of Wish targets, made some minor alterations and took out some of the less useful cards.

During the interval Herzog took the opportunity to poke fun at Malherbaud's accent.

Both players mulliganed and Herzog came out the winner as he dropped a Compost on the table on turn two before the Frenchman had cast anything. This gave Malherbaud pause for thought in his turn, especially as his game plan had been to Rites away Herzog's hand. It wasn't pretty. Lose four cards, to take three cards off your opponent (Centaur, Compost, Logic), but give them two in the process. Malherbaud didn't have much choice, his hand wasn't doing a great deal else.

Herzog started beating with Aquamoeba then a Rootwalla while Malherbaud wished for Buried Alive, then stocked his graveyard with Arcanis, Akroma and Anger. Malherbaud attempted to Stitch Together Akroma. That was Countered. He tried again. Herzog Logiced. The Aquamoeba and Rootwalla came in for lethal damage on the following turn.

Herzog was now one game away from taking the title for a second time.

No turn one Duress for Malherbaud again as he dropped a Barren Moor and then Wished for Zombify on his next turn. Herzog tapped out for Aquamoeba and then had his hand shredded by a Last Rites that took out every spell and left him with nothing but land. A Rootwalla appeared off the top, leaving the Frenchman clear to Zombify out Phantom Nishoba. 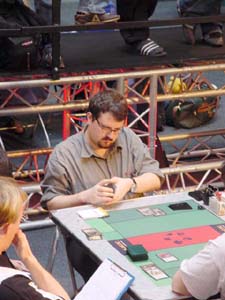 Herzog drew a timely Counterspell for a Doomed Necromancer, but it still wasn't good for him as the Nishoba continued to take the game away in massive life swings. An Aquamoeba got trodden over for a turn to keep Herzog alive, but the top of his library had no help forthcoming and the Frenchman got to pull one back.

"That was a fairly devastating Last Rites" – Herzog.

Game 4 started very precariously for the Frenchman as he had to mulligan down to five. Herzog wasn't in any mood to take pity and sent a Mongrel in, pitching an Aquamoeba for an extra point of damage and then bringing out a back up Mongrel.

Meanwhile Malherbaud Wished for a Buried Alive and stocked up Nishoba, Akroma and Anger.

Herzog had stopped laying land and was relying on the Mongrels. He swung again, pitched an Aquamoeba and made Compost, leaving 1 blue open.

Malherbaud didn't have a reanimate spell unfortunately. He had to Wish for it first. That lost him a turn and put him one turn away from death to the mongrels. He tried it as a last resort but, as expected, Herzog was holding a Circular Logic.